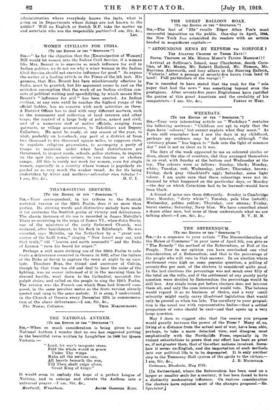 [To THE EDITOR OF THE " SPECTATOR."] SIR,—As a sequence to your article " The Disconsideration of the House of Commons" in your issue of April 5th, you give as " The Remedy " the method of the Referendum, or Poll of the People. Now in my opinion you have overlooked one vital consideration of a Referendum, and that is the percentage of the people who will vote in that manner. In an election where excitement runs high on some popular question, a polling of seventy-five per cent, of the electors is considered quite good. In the last elections the percentage was not much over fifty of the total on the rolls, and if the settlement of any purely party question were decided by Referendum the percentage would be still less. Any single issue put before electors does not interest them all, and only the ones interested would vote. The balance would regard it as no business of theirs, and a very small minority might easily carry ill-advised legislation that would only be proved so when too late. The corollary to your proposi- tion is the usual one with representative bodies—that a settled proportion of votes should be cast—and that opens up a very large question.

May I dare to suggest also that the course you propose would greatly increase the power of the Press ? Many of, us, living at a distance from the actual seat of war, have been able, perhaps, to take a more detached view, and disagree most emphatically with the Northcliffe Press, especially ia its violent exhortations to prove that our effort has been as great as, if not greater than, that of the other nations involved, Some- how it seems un-English, and the importation- of such methods into our political life is to be depreeated. It is enly another step to the Tammany Hall system of the spoils to the victors.— I am, Sir, &c., J. B. MACDONALD. Gatoonra, Rhodesia, May 27th. .

[In Switzerland, where the Referendum has been used on a larger or smaller scale for a century, it has been found to have a distinctly moderating influence. On mature consideration the electors have rejected most of the changes proposed.—Ea. Spectator.]