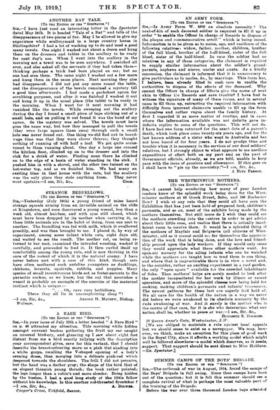 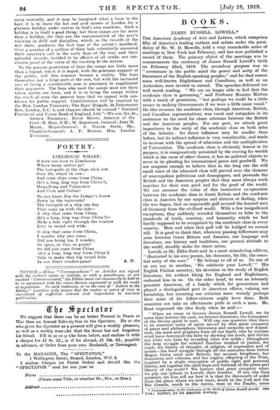 SIIMICER CAMPS OF THE BOYS' BRIGADE. [To THE EDITOR or

rag " SPECTATOR."1 SIH.—The-outbreak of war in August, 1914, found the camps of the Boys' Brigade in full swing. Since then camps have been out of the question; but it is felt this summer should see a -complete revival of what is perhaps the most valuable part of the training of the Brigade.

Before bite war over three thousand London boys attended camp annually, and it may be imagined what a boon to the boys it is to leave the hot and arid streets of London for a glorious holiday under canvas in God's own sunshine. Such a holiday is in itself a good thing; but these camps are far more than a holiday, for they are the consummation of the year's training in drill and discipline, which, as the records of the war show, produces the best type of the nation's manhood. Over a quarter of a million of these lads voluntarily answered their country's call in the early days of the war, and their splendid records, testified to by officers of all ranks, are con- clusive proof of the value of the training to the nation.

To the present generation of boys the camps are little more than a legend, which it is hoped, with the generous support of the public, will this summer become a reality. The boys themselves pay a large part of the cost, but with the increased cost of living a considerable sum is necessary to supplement their payments. The boys who need the camps most are those whose means are least, and it is to bring the camps within the reach of even the poorest boys that we appeal with con- fidence for public support. Contributions will be received by the Hon. London Treasurer, The Boys' Brigade, 34 Paternoster Row, London, E.C. 4, and cheques should be crossed " National Provincial and Union Bank of England, Ltd."—We are, Sir, &c.,