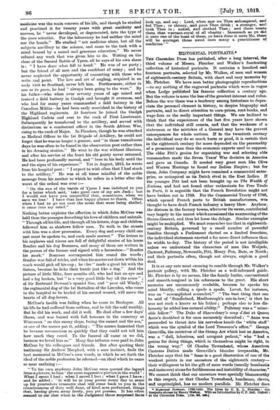 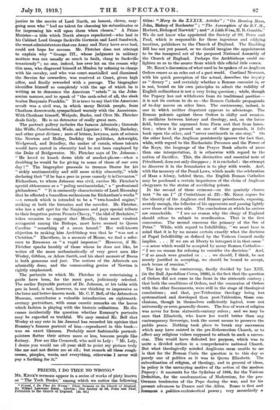 Tim Clarendon Press has published, after a long interval, the third volume of Messrs. Fletcher and Walker's fascinating collection of historical portraits. It contains a hundred and fourteen portraits, selected by Mr. Walker, of men and women of eighteenth-century Britain, with short and racy memoirs by Mr. Fletcher. We have seen better photographic reproductions —to say nothing of the engraved portraits which were in vogue when Lodge published his famous collection a century ago. But the volume is none the lees of the greatest interest and value. Before the war there was a tendenoy among historians to depre- ciate the personal element in history, to despise biography and portraits, and to direct attention to corn-prices, rent-books, and wage-lists as the really important things. We are inclined to think that the experiences of the last five years have shown that the individual still counts, and that the weakness of a statesman or the mistakes of a General may have the gravest consequences for whole nations. If In the twentieth century the individual may do so much harm or good, it is certain that in the eighteenth century far more depended on the personality of a prominent man than the economic experts used to suppose. The elder Pitt's genius for organizing war and selecting able commanders made the Seven Years' War decisive in America and gave us Canada. It needed very great men like Clive and Warren Hastings to found our Indian Empire ; but for them, John Company might have remained a commercial• enter- prise, as uninspired as its Dutch rival in the East Indies. If the younger Pitt had not been brought up on The Wealth of Nations, and had not found other enthusiasts for Free Trade in Paris, it is arguable that the French Revolution might not have broken out in 1789. For the Commercial Treaty of 1788, which opened French ports to British manufacturers, was thought to have dealt French industry a heavy blow. Anyhow, the distress in the factory towns, whatever its cause, contributed very largely to the unrest winchoocaaioned the summoning of the States-General, and thus let loose the deluge. Similar examples might be multiplied. We must remember too that in eighteenth- century Britain, governed by a small number of powerful families through a Parliament elected on a limited franchise, the individual statesman exerted a far more direct influence than he wields to-day. The history of the period is not intelligible unless we understand the characters of men like Walpole, Carteret, Pulteney, Newcastle, Pitt, Henry Fox, Butte, or North ; and their portraits often, though not always, explain a good deal It is at any rate most amusing to ramble through Mr. Walker's portrait gallery, with Mr. Fletcher as a well-informed guide. Mr. Fletcher is by no means, like the family butler, conventional and smooth-tongued in his references to the great. His short memoirs are uncommonly readable, because he speaks his mind bluntly, calling a spade a spade. Lovat, for instance, was an " accomplished scoundrel" " The best thing that can bo said of Sunderland, Marlborough's son-in-law,' is that he was not such a knave as his father ; perhaps also to less dis- honesty he added less.natural ability." Pulteney was a " miser- able fellow." The Duke of Shrewsbury's coup d'etat at Queen Anne's deathbed is for once accurately described : " Anne was persuaded to thrust into his nerveless hands the ` white staff' which was the symbol of the Lord Treasurer's office." George Grenville, the contriver of the Stamp Act which lost us America, was a " dull, laborious, and arrogant pedant," who " had a genius for doing things, which in themselves might be right, in the wrong way." Of Charles Townshend, whose American Customs Duties made Grenville's blunder irreparable, Mr. Fletcher says that his " fame is a good illustration of one of the weakest points in our ancestors of the eighteenth century— their willingness to let the gift of mere words (usually bombaatie and insincere) atonelor faithlessness and instability of character" We cannot think that our ancestors were specially blameworthy in this respect, or that Charles Townshend, handsome, clever, and unprincipled, has no modern parallels. Mr. Fletcher does • Riderless/ Portraits, 1700-1800. The tdves by O. B. L. Fletcher the portraits (Oomph, Emery Walker. With an Introduction by C. F. Bell. Orlosd : at the Clarendon Preen. [12a. 8d, =CI

justice to the merits of Lord North, an honest, clever, easy- going man who " had no talent for choosing his subordinates or for impressing his will upon them when chosen." A Prime Minister—a title which North always repudiated—who: had in his Cabinet Lord George Sackville Germain awl Lord Sandwich, the worst administrators that our Army and Navy have ever had, could not hope for success. Mr. Fletcher does, not attempt to explain why "George III., whose judgment in military matters was not usually so much in fault, clung to Sackville tenaciously"; no one, indeed, has ever hit on the reason why this man, who disgraced'himself at Minden by refusing to charge with his cavalry, and who was court-martialled and dismissed the Service for cowardice, was received at Court, given high office, and finally rewarded with a peerage. The biographer identifies himself so completely with the age of which he is writing as to denounce the American " rebels " in the John- sonian manner, and to speak of "the arch-rebel.-of all, the sleek traitor Benjamin Franklin." It is truer to say that the _American revolt was a civil war, in which many British people, from Chatham downwards, sympathized warmly with the Americana. With Chatham himself, Walpole, Burke, and Clive Mr. Fletcher deals fairly. He is no detractor of really great men.

The portrait gallery includes the famous Admirals ; Generals like Wolfe, Cumberland, Wade, and Ligonier ; Wesley, Berkeley, and other great divines ; men of letters, lawyers, men of science like Newton and Halley, Dodsley the publisher, Arkwright, Wedgwood, and Brindley, the maker of canals, whose talents would have rusted in obscurity had he not been employed by the Duke of Bridgewater. Mr. Fletcher says of Dr. Johnson : " He loved to knock down idols of market-plaoes—what a drubbing he would be for giving to some- of those of our own day ! " The biographer proceeds to trounce- Sterne for his• " sickly sentimentality and still more sickly obscenity," while declaring that "if he has a peer in prose comedy it-is Cervantes." Richardson, to whom Johnson was civil, excites Mr. Fletcher'a special abhorrence as a " puling sentimentalist," a " professional philanderer." " It is eminently characteristic of Lord Macaulay that he affected a boundless enthusiasm for Richardson's works " —a remark which is intended to be a " two-handed engine," striking at both the historian and the novelist. Mr. Fletcher, who has a soft. spot for the Nonjurors and pays special tribute to their forgotten patron Francis Cherry, " the idol of Berkshire," takes occasion to suggest that Hoadly, their most virulent antagonist among the Bishops, must have seemed to Queen Caroline " something of a mean hound." Her well-known objection to making him Archbishop was that he "was not a Christian." Elsewhere, in a memoir of Hume, we find a refer- ence to Rousseau as " a vapid impostor." However, if Mr. Fletcher speaks harshly of those whom he does not like, he writes all the more enthusiastically of very great men like Wesley, Gibbon, or Adam Smith, and 'his short memoir of Burns is both generous and just. The notices of the Admirals are admirably done, and the- commanding genius of Newton is rightly emphasized.

The portraits to which Mr. Fletcher is so entertaining a guide have been, for the most part, judiciously selected. The earlier Reynolds portrait of Dr. Johnson, at his table with pen in hand, is not, however, to our thinking so impressive as the later and better-known work. Mr. C. F. Bell, of the Ashmolean Museum, contributes a valuable introduction on- eighteenth- century portraiture, with some caustic remarks. on the havoc which fashion is playing with the historic oolleotions. He dis- cusses incidentally the question whether Romney's• portraits- may be regarded as truthful. We may remind Mr. Bell that Wesley at any rate in his Journal has recorded his opinion that Romney's famous portrait of him—reproduced in this book— was, an exact likeness. Probably most fashionable portrait- painters flatter their sitters more or less, because people like- flattery. Few are like Cromwell, who said to Lely " Mr. Lely, I desire you would use all- your skill to paint my picture truly like, me and not flatter me at all; but remark all these rough- nesses, pimples, warts; and everything, otherwise, I never wills pay a farthing:for it."