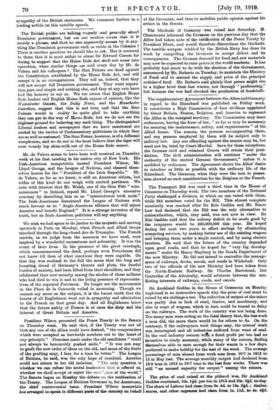 We wish we had space to do justice to the

majestic and moving spectacle in Paris on Monday, when French and Allied troops marched through the long-closed Arc de Triomphe. The French crowds, as we judge from the accounts we have read, were inspired by a wonderful earnestness and solemnity. It was the event of their lives. In the presence of the great cenotaph, which commemorated the dead, perhaps even Frenchmen did not know till then of what emotions they were capable. On that day was realized to the full the sense that the long and haunting dread of Germany's threats and plots, the fearful burden of anxiety, had been lifted from their shoulders, and they celebrated their new security among the shades of those millions who had died to win it and in the living presence of representa- tives of the regained Provinces. No longer are the monuments in the Place de in Concorde veiled in mourning. Though we cannot say more on the subject, it is the barest truth that the hearts of all Englishmen went out in sympathy and admiration to the French on that great day. And all Englishmen know that the future safety of France is at once the duty and the interest of Great Britain and America.