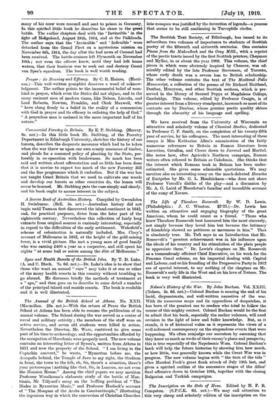 The Life of Theodore Roosevelt. By W. D. Lewis. (Philadelphia.:

J. C. Winston. $2'25.)—Dr. Lewis has written an attractive and engaging biography of the great American, whom he could count as a friend. " Those who knew Theodore Roosevelt best honoured him the most sincerely, not simply because they loved him but because the intimacy of friendship showed no pettiness or meanness in him." That is absolutely true. Mr. Taft says in an Introduction that Mr. Roosevelt's " greatest achievement was in his influence upon the ideals of his country and his stimulation of the plain people to appreciate them." Dr. Lewis's chapters on Mr. Roosevelt as a tremendously efficient Chief Executive, on his work for the Panama Canal scheme, on his impartial dealing with Capital and Labour, and'on his founding of the Progressive Partyin 1912 are of •special interest, to say nothing of the chapters on Mr. Roosevelt's early life in the West and on his love of Nature. The book is very well illustrated.