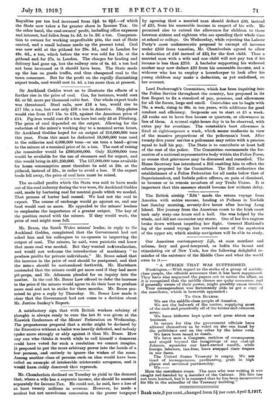 Page 3, 19 July 1919 — Mr. Chamberlain declined on Tuesday to yield to the demand
Close

Mr. Chamberlain declined on Tuesday to yield to the demand

that, where -a wife has a separate income, she-should be assessed separately for Income Tax. He could-not, he said, face a loss of at least twenty millions in revenue. However, he made - a modest but not unwelcome concession to the poorer taxpayer

by agreeing that a married man should deduct £50, instead of £25, from his assessable income in respect of his wife. He promised also to extend the allowance for children to those between sixteen and eighteen who are spending their whole time at sehoolam college. On Wednesday, while rejecting the Labour Party's most undemocratic proposal to exempt all incomes under £250 from taxation, Mr. Chamberlain• agreed to allow a deduction of £40 instead of £25, for the first child. Thus a married man with a wife and one child will not pay tax if his- inoome-is less than £210. A bachelor supporting his widowed mother may now deduct £25 from his assessable income, and a widower who has to employ a housekeeper- to look after his young children may make a deduction; as yet undefined, on her account.