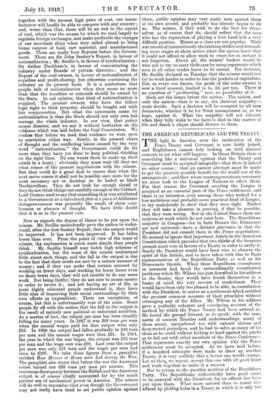 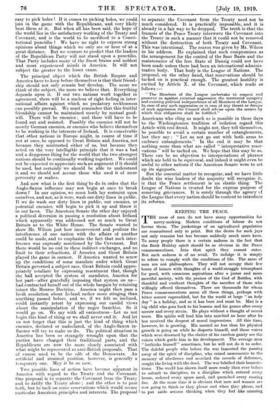 Page 7, 19 July 1919 — THE AMERICAN REPUBLICANS AND THE TREATY. T HE fight in America
Close

THE AMERICAN REPUBLICANS AND THE TREATY. T HE fight in America

over the ratification of the Peace Treaty and Covenant is now fairly joined, and Englishmen cannot help looking on with anxious concern to see what will happen. In Great Britain there is something like a universal opinion that the Treaty and Covenant must be accepted integrally—that there is indeed no other course ; that an earnest attempt must be made to get the greatest possible benefit for the world out of the arrangement ; and that where rearrangements are necessary we must look to the League of Nations to effect them. For that reason the Covenant creating the League is accepted as an essential part of the Peace settlement, and there is no intention, even among those who wished for a less ambitious and probably more practical kind of League, to try maliciously to show that they were right. Rather they will take a pleasure in proving, if that be possible, that they were wrong. But in the United States there are motives at work which do not exist here. The Republican majority in Congress—for in both Houses the Democrats are now outvoted—have a distinct grievance in that the President did not consult them in the Peace negotiations.

He seemed to ignore that important Article in the American Constitution which provides that two-thirds of the Senators present must vote in favour of a Treaty in order to ratify it.

Surely the President would have been wise to observe the spirit of this Article, and to have taken with him to Paris representatives of the Republican Party as well as his Democratic friends. When these Republican consultants or assessors had faced the extraordinarily complicated problems which Mr. Wilson has just described in his address to the Senate, they would have found themselves in a frame of mind the very reverse of recalcitrant. They would have been only too pleased to be able, in consultation with the President, to arrive at a settlement which satisfied the greatest common measure of their principles without estranging any of the Allies. Mr. Wilson in his address gave a perfectly coherent and convincing account of the method by which the Peace Treaty had been arrived at. He found tfie ground littered, so to speak, with the rem- nants of ancient Treaties and understandings, many of them secret, encumbered too with natural alarms and deep-rooted prejudices, and he had to salve as many of his ideas as he could without kicking so hard against the pricks as to fall out with other members of the Peace Conference. That represents exactly our own opinion why the Peace settlement must be accepted. As we have said before, if a hundred attempts were made to draw up another Treaty, it is very unlikely that a better one would emerge. Let us then, we repeat, accept this one with all good heart and work together to make it a success. But to return to the peculiar motives of the Republican Party. The Republicanu undoubtedly have good cause to be annoyed with the President, for an affront has been put upon them. What more natural than to resent this affront by picking holes in a Treaty in which it is only too easy to pick holes ! If it comes to picking holes, we could join in the game with the Republicans, and very likely beat them at it. But when all has been said, the hope of the world lies in the satisfactory working of the Treaty and Covenant, and is the world to be sacrificed to a Consti- tutional punctilio ? We have no right to express strong opinions about things which we only see or hear of at a great distance. But we venture to predict that the leaders of the Republican Party will not stand upon a punctilio. That Party includes many of the finest brains and noblest and most experienced minds in America. It will not subject the greater to the lesser cause.

The principal object which the British Empire and America have to keep before themselves is that their friend- ship should not only remain but develop. The more we think of the subject, the more we believe that. Everything depends upon it. If our two nations work together in agreement, there will be a nucleus of right feeling in inter- national affairs against which no predatory recklessness can possibly prevail. We must remember that this fruitful friendship cannot be maintained merely by mutual good- will. There will be enemies ; and these will have to be found out and resisted. Possibly the enemies will not be merely German enemies, or enemies who believe themselves to be working in the interests of Ireland. It is conceivable that other nations in Europe might, in course of time if not at once, be opposed to Great Britain and America, not because they mistrusted either of us, but because they acted. on the very intelligible principle that it was a bad and a dangerous thing for the world that the two strongest nations should be continually working together. We could not be expected to appreciate such an argument if it should be used, but certainly we should be able to understand it and we should not accuse those who used it of mere perversity or malice.

And now what is the first thing' to do in order that the Anglo-Saxon influence may not begin at once to break down ? In our opinion, we must both lay restraint upon ourselves, and not, as it were, wash our dirty linen in public. If we do wash our dirty linen in public, our enemies, or potential enemies, will begin to pick it up and throw it in our faces. The American Senate the other day enjoyed, a political diversion in passing a resolution about Ireland which apparently was addressed not so much to Great Britain as to the White House. The Senate wanted to show Mr. Wilson just how inconvenient and perilous the interference of one nation with the affairs of another could be made, and to emphasize the fact that such inter- ference was expressly sanctioned by the Covenant. But there would be no end to these indirect exchanges, and no limit to their refractions, if America and Great Britain played the game in earnest. If America wanted to screw up the conditions of some mandate under which Great Britain governed a subject race, Great Britain could appro- priately retaliate by expressing resentment that though she had accepted the system of mandates, America for her part—after gracefully imposing that system on us— had contracted herself out of the whole bargain by retaining intact the Monroe Doctrine. America might then pass a fresh resolution about Ireland rather more stinging than anything passed before, and we, if we felt so inclined, could instantly retort by expressing our candid views about the manipulation of the negro franchise. So it would go on. We say with all earnestness—Let us not begin this kind of thing or we shall never end it: And let its not forget that this is just the kind of thing which enemies, declared, or undeclared, of the Anglo-Saxon in- fluence will try to make us do. The political situation in America has been so strangely wrought upon that the parties have cheaved their traditional parts, and the Republicans are now the more closely associated. with what might be represented as anti-British proposals. That of course used to be the rdie of the Democrats. An artificial and strained position, however, is generally a temporary one. May it be so now.

Two possible lines of action have become apparent in America with regard to the Treaty and the Covenant. One proposal is to separate the Covenant from the Treaty and to ratify the Treaty alone ; and the other is to pass both, but to tack on some reservations which would secure particular American principles and interests. The proposal to separate the Covenant from the Treaty need not be much considered. It is practically impossible, and it is already in a fair way to be dropped. The truth is that the framers of the Peace Treaty interwove the Covenant into the Treaty in such a manner that it could not be removed without the destruction of both Treaty and Covenant. This was intentional. The reason was given by Mr. Wilson in his address. He explained that such compromises as the arrangement for the control of the Saar Basin and the maintenance of the free State of Danzig could. not have been made unless there had been an international adminis- trative body. That body is the League of Nations. The proposal, on the other hand, that reservations should be tacked on is practical enough. The greatest hostility is excited by Article X. of the Covenant, which reads as follows :- " The Members of the League undertake to respect and preserve as against external aggression the territorial integrity and existing political independence of all Members of the League. In case of any such aggression or in case of any threat or danger of such aggression the Council shall advise upon the means by which this obligation shall be fulfilled."

Americans who cling as much as is possible in these days to the Washingtonian tradition of isolation regard this Article with real dread. It might not, they tell themselves, be possible to avoid a certain number of entanglements, but they say : " Let us not go out with both arms to embrace entanglements." In the end it may be that nothing more than what are called " interpretative reser- vations " will be tacked on. We hope that this may be so. There can be no objection to interpretations of phrases which are held to be equivocal, and indeed it might even be useful to other nations if the American Senate were to set up its signposts.

But the essential matter to recognize, and we have little doubt the wise leaders of the majority will recognize it, is that the Peace settlement is an elastic thing. The League of Nations is created for the express purpose of removing grievances. It is surely through the agency cf the League that every nation should be content to introduce its reforms.