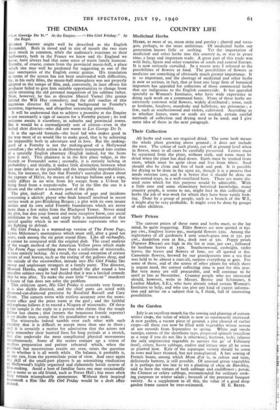 GEORGE FORMBY might well be described as the English Fernandel. Both in mood and in size of mouth the two stars have much in common, while the audience's reactions to their buffoonery, both in the France we knew and tht England we know, have always had that same sense of warm family humour. Formby, of course, comes from the provincial music-hall, a place which one may Well be pardoned for suggesting as one of the true sanctuaries of the English comic genius. His translation to terms of the screen has not been unattended with difficulties,

for, in his early films, the music-hall atmosphere was not properly adapted to the tempo of film, and, conversely, in later efforts his producer failed to give him suitable opportunities to change front while retaining the old personal magnetism of his sublime father. Now, however, he has as director Marcel Varnel (the genius behind the Will Hay comedies), and the deft touches of this ingenious director fill in a living background to Formby's immense, ingenuous, and altogether entrancing personality.

It will be understood that to achieve a premiere at the Empire is not necessarily a sign of success for a Formby picture; real

welcome awaits it elsewhere, in suburbs and provincial towns. But it would be a curmudgeonly sort of citizen—even in the boiled shirt district—who did not warm to Let George Do It.

It is the age-old formula—the local lad who makes good in the way most of us would like to make good, that is by achieving the impossible both in adventure and in love. But the making- good of a Formby is not the making-good of a Hollywood comedian ; the whole action is deliberately transposed into realms of a specially English phantasy (English indeed, for the Scots have it not). This phantasy is in the first place vulgar, in the ' French or Fernandel sense secondly, it is entirely lacking in probability ; and thirdly, it makes little distinction. between what one may define as the possible and the impossible improbabilities. Note, for instance, the fact that Formby's surrealist dream about the capture of Hitler, by means of a barrage balloon and a rope, really differs in no wise from his escape from a U-boat by being fired from a torpedo-tube. Yet in the film the one is a dream and the other a concrete part of the plot.

The plot, indeed ! A mad collection of gags and incidents concerning a ukelele player who finds himself involved in secret service work at pre-Blitzkrieg Bergen ; a plot with its own insane unities and its own solid Formby foundations which are never more than a few miles from the Blackpool Tower. Never mind the plot, but don your lowest and most receptive brow, cast social inhibitions to the wind, and enjoy fully a manifestation of that special quality which in no small measure represents what we are fighting to defend.

His Girl Friday is a warmed-up version of The Front Page, Lewis Milestone's masterpiece which must still, after a good ten years, rank among the six great sound films. Like all rechauffes, it cannot be compared with the original dish. The cruel analysis of the tough method of the American Yellow press which made. The Front Page something more than a collection of wisecracks, is here entirely lacking. As a result, the casual retention of certain scenes of real horror, such as the testing of the gallows drop, and the suicide of the streetwalker, intrude into His Girl Friday like messy and unpleasant strangers at a family party. The director, Howard Hawks, might well have rebuilt the plot round a less macabre subject once he had decided that it was a farcical comedy that he was after. To make the poor little " innocent " murderer a figure of fun does not solve the problem. • This criticism apart, His Girl Friday is certainly very funny it is also slickly directed, and the chief parts are acted with diamond-cut-diamond precision by Rosalind Russell and Cary Grant. The camera roves with restless accuracy over the news- paper office and the press room at the gaol ; and the faithful microphone follows it to record a Niagara of wisecracks. Of these a fair sample is the reply to a person who claims that the tough Editor has charm ; that (retorts the beauteous female reporter) is no doubt true, seeing that his grandfather was a snake.

The wisecracks indeed tumble over each other with such

rapidity that it is difficult to accept more than one in three ; and it is certainly a matter for admiration that the actors not only remember their hurried lines for long periods at a stretch, but also undertake the most complicated physical movements simultaneously. Some of the scenes conjure up a vision of endless preparation and patient rehearsal which, when the polished but meretricious results are seen, raises the question as to whether it is all worth while. On balance, it probably is, at any rate, from the pyrotechnic point of view. 'And once again the skill of the small-part. players Is an astonishing vindication of Hollywood's highly organised and elaborately lavish system of film-making. Amid a host of familiar faces one may occasionally put a name to an old friend, such as Porter Hall ; but more often they remain triumphantly anonymous. Without their inspired' teamwork a film' like His Girl Friday would be a drab affair.' indeed.