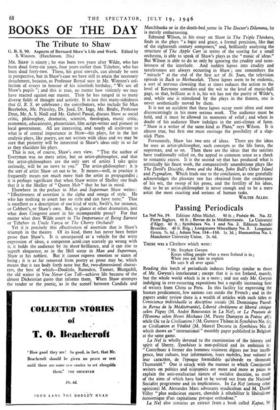 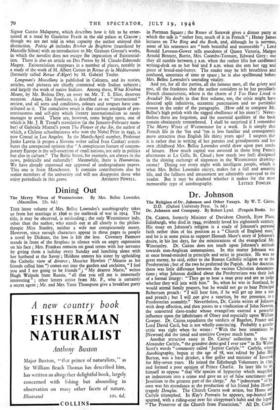 THERE was a Clerihew which went : " Mr. Stephen Gwynn Keeps telling people what a mess Ireland is in; When you ask him to explain He says tt all over again."

Reading this batch of periodicals induces feelings similar to those of Mr. Gwynn's interlocutor ; except that it is not Ireland, merely, but the whole world which is in a mess ; and not only Mr. Gwynn indulging in ever-recurring expositions but a rapklly increasing host of writers from China to Peru. In this facility for expressing the human predicament, few nations can outdo the French ; and in the papers under review there is a wealth of articles with such titles as Conscience individuelle 'et discipline sooiale (M. Dominique Parodi in Revue de la Meditetrariee), Liberte chritienne et liberte civique selon Peguy (M. Andre Rousseaux in Di Nef), or Le Pouvoir de l'Homme selon Henri Michaux (M. Pierre Dumayet in Poisie 46); while Ou va la Civilisation ? (M. Gustave Thibon in Syntheses No. t); or Civilisation et Vitalite (M. Marcel Decorte in Syntheses No. r) which shows an " international " monthly paper published in Belgium at the same game.

La Nef is wholly devoted to the examination of the history and spirit of liberty. Syntheses is non-political and its ambition is: " Contribuer a former des hommes vraiment dies par leur intelli- gence, leur culture, leur information, leurs mobiles, leur volonte et leur caractere, de repoque formidable qu'aborde en tatonnant l'humanite." One is struck with the manner in which Continental writers on politics and:ec:Pinrics are more and more at pains to explain the anti-totalitarian nature of socialist doctrine, so many of the aims of which have had to be sorted out from the National Socialist programme and its implications. In La Nef (among other opinions) M. Alexandre Marc advocates syndicalism and M. Daniel Villey " plus audacieux encore, cherchat a rehabiliter le liberalism economique d'un capitalisme presque orthodoxe." La Nef also contains an extract from a book called Kaput, by Signor Curzio Malaparte, which describes how it felt to be enter- tained at a meal by Gauleiter Frank in the old palace at Cracow ; though we are not told in what capacity the author enjoyed this distinction. Poesie 46 includes Rocher de Brighton (translated by . Marcelle Sibon) with an introduction to Mr. Graham Greene's works, in which the novelist does not escape the imputation of Existential- ism. There is also an article on Dos Passos by M. Claude-Edmonde Magny. Existentialism reappears in a number of places, notably in a study of the work of M. Albert Camus in Revue de la Mediterranie (formerly called Revue d'Alger) by M. Gabriel Teuler.

Longman's Miscellany is published 'in Calcutta, and its stories, articles, and pictures are chiefly connected with Indian subjects ; and largely the work of native Indians. Among these, What Krishna Meant, by Mr. Bishnu Dey, an essay on Mr. T. S. Eliot, deserves mention. Adam, like Synthesis, is described as an " international " review, and all sorts and conditions, colours and tongues have con- tributed to it. The cumulative result is that curious amalgam of pre- tentiousness and self-pity which literary internationalism so rarely manages to avoid. There are, however, some bright spots, one of which is Mr. J. B. Trend's translation (in the January-February num- ber) of Gabriela Mistral's poem The Flower of the Air, the author of which, a Chilean schoolmistress who won the Nobel Prize in 1945, is now Consul in Los Angeles. In the March-April ntimber, Professor Danko Lavrin (a propos a Slovene writer called Ivan Cankar) contri- butes the unexpected opinion that " A conspicuous feature of contem- porary Europe is the self-assertion of small nations, not only in politics but also in culture." The Baltic States, for example, are always in the news, politically and culturally! Meanwhile, there is Humanitas. We have already expressed our approval of undergraduate papers. This one is from Manchester. It contains contributions also by senior members of the university and will not disappoint those who