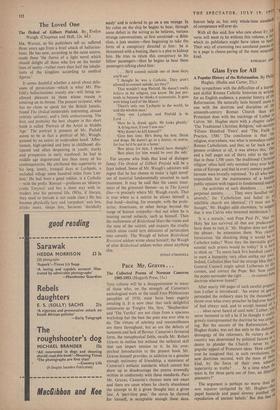 The Ordeal of Gilbert Pinfold. By Evelyn Waugh. (Chapman and Hall, 12s. 6d.) MR. WAUGH, so his publishers tell us, suffered three years ago from a brief attack of hallucina- tions. He has now, according to the same source, made these 'the theme of a light novel which should delight all those who live on the border lines of sanity—rather more than half the inhabi- tants of the kingdom according to medical figures.'

It seems doubtful whether a novel about delu- sions of persecution—which is what Mr. Pin- fold's hallucinations mainly are—will bring un- alloyed pleasure to those whose reason is tottering on its throne. The present reviewer, who has no claim to speak for the British lunatic, found The Ordeal moderately interesting, almost entirely unfunny, and/ a little embarrassing. The first, and probably the best, chapter in this short book is called 'Portrait of the Artist in Middle Age.' The portrait it presents of Mr. Pinfold seems to be in fact a portrait of Mr. Waugh, painted by no satiric or malevolent hand. 'Affec- tionate, high-spirited and bhsy in childhood; dis- sipated and often despairing in youth; sturdy and prosperous in early manhood; he had in middle age degenerated less than many of his contemporaries. He attributed this superiority to his long, lonely, tranquil days at Lychpole, a secluded village some hundred miles from Lon- don.' He had been a good soldier, is a Catholic —with the prefix `Roman'—professes an 'idiosyn- cratic Toryism' and has a short way with in- truders into his personal life. (Why, if literate, they need to intrude is not made clear.) He has become physically lazy and 'corpulent,' eats less, drinks more, sleeps less, becomes 'decidedly

seedy' and is ordered to go on a sea voyage. In his cabin on the ship he begins to hear, through some defect in the wiring as he believes, various strange conversations, at first unrelated—a Bible class, a jazz session—then beginning to take the form of a conspiracy directed at him : he is threatened with a beating, there is a plot to kidnap him. He tries to relate this conspiracy to his fellow passengers—then he begins to hear these passengers talking about him : . He'll commit suicide one of these days, you'll see.'

'I thought he was a Catholic. They aren't allowed to commit suicide, are they?'

'That wouldn't stop Pinfold. He doesn't really believe in his religion, you know. He just pre- tends to because he thinks it aristocratic. It goes with being Lord of the Manor.'

'There's only one Lychpole in the world, he told the wireless man.'

`Only one Lychpole and Pinfold is its Lord. . .

'Here he is, drunk again. He looks ghastly.' 'A dying man, if ever I saw one'

'Why doesn't he kill himself?'

'Give him time. He's doing his best. Drink and drugs. He daren't go to a doctor, of course, for fear he'd be put in a home.'

For anyone who finds that kind of dialogue funny The Ordeal of Gilbert Pinfold will be a feast indeed. Some of Mr. Waugh's admirers will regret that he has chosen to make 'a light novel' out of material fundamentally unsuited to such treatment. It may be said that the comic treat- ment of the grimmest themes—as in The Loved One—is precisely where Mr. Waugh excels. That is true when as a satirist he allows himself a, free hand—dealing, for example, with the prole- tariat, Americans, or other beings beyond the range of human sympathy—but not when he is treating sacred subjects, such as himself. Then the mellowness of Brideshead blurs the vision and the tone of the satirist, and impairs the cruelty which alone could turn delusions of persecution into comedy. The Waugh of before Brideshead Revisited seldom wrote about himself; the Waugh of after Brideshead seldom writes about anything else.