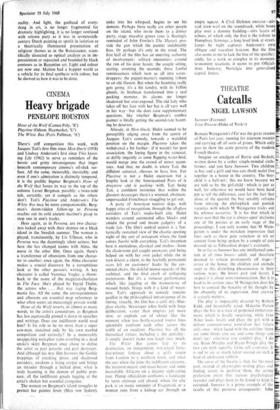 There's stiff competition this week, with Jacques Tati's first film since Mon Oncle (1958) and Lindsay Anderson's first since This Sport- ing Life (1962) to serve as reminders of the heroic and gritty intransigences that linger beneath contemporary cinema's oil-slick sur- face. All the same, inexorably, inevitably, and even if one's admiration is distinctly tempered, it is the prolific Ingmar Bergman's Hour of the Wolf that forces its way to the top of the column. Lesser Bergman, possibly; a twice-told tale, certainly; yet it compels as the others don't. Tati's Playtime and Anderson's The White Bus may be more companionable; Berg- man's doom-ridden follow-up to Persona reaches out its cold ancient mariner's grasp to stop one in one's tracks.

Here again, as in Persona, are two charac- ters locked away with their distress on a bleak island in the Swedish summer. The woman is played, translucently, by Liv Ullman, who in Persona was the dauntingly silent actress; but here she has changed names with Alma, the nurse in the other film. Once again, there's a transference of obsessions from one charac- ter to another; once again, the Alma character makes a crucial discovery by a surreptitious look at the other person's writing. A key character is called Veronica Vogler, a throw- back to the name of the magician-charlatan in The Face. She's played by Ingrid Thulin, the actress who . . that way raging Berg- mania lies. All the same, the correspondences and allusions are essential map references to what often seems an increasingly private world.

Hour of the Wolf reverts, in almost as many words, to the artist's conundrum, as Bergman has less equivocally pinned it down in speeches and writings. Does our indifferent world need him? Is his role to be no more than a super con-man, sustained only by his own morbid compulsion and curiosity? In a memorably unappealing metaphor (ants crawling in a dead snake's skin) Bergman once chose to define the artist as part parasite and part destroyer. And although his new film borrows the Gothic trappings of creaking doors and shadowed corridors, awakens a living corpse and brings an intruder through a locked door, what is truly haunting is the demon of public pres- sure, all the indifferent greeds tugging at the artist's shaken but essential arrogance.

sinks into his whirpool, begins to see his demons. Perhaps there really are other people on the island, who invite them to a dinner party, stage macabre games (one is fleetingly reminded of John Fowles's The Magus). pro- vide the gun which the painter indubitably fires. Or perhaps it's only in the mind. The first half of the film has an unerring authority of involvement: solitary encounters around the rim of his dour haven; the couple sitting, staring, counting the seconds; those fateful reminiscences which turn us all into eaves- droppers; the puppet-master's stunning tribute to an old illusion. But when the haunting really gets going, it's a bit tawdry, with its Fellini ghouls, its birdman transformed into a real pecking monster, its alarms no longer shadowed but over-exposed. The old lady who takes off her face with her hat is all very well in her way—but she does raise supplementary questions, like whether Bergman's sombre painter is finally getting the second-rate haunt- ing he deserves.

Already, in Mon Oncle. Hulot seemed to be perceptibly edging away from the centre of Jacques Tati's comedy, towards a watchful position on the margin. Playtime takes the withdrawal a bit further : if it weren't for past association, the loping figure in the raincoat, as deftly ungainly as some flapping water-bird, would merge into the crowd of minor eccen- trics. And that, no doubt, is where Tati, the diffident autocrat, chooses to have him. For Playtime is not a Hulot excursion but a lengthy look at the Americanised Paris of le drugstore and le parking—with, Tati being Tati, a confident insistence that within the glassiest skyscraper there's a wizened, obstinate, unpersuaded Frenchman struggling to get out.

A party of American tourists skips, with happy cries of recognition, through the all-glass corridors of Tati's studio-built city. Hulot wanders around automated office blocks and amidst the proud and insane gadgetry of a trade fair. The film's central section is a fan- tastically sustained view of the chaotic opening night of the sort of restaurant where the food comes flambe with everything. Tati's invention here is meticulous, classical and tireless—from the cloakroom girl caught unawares and being helped on with her own jacket while she in turn divests a client, to the fearfully permanent scars left on customers' backs by the cor- oneted chairs, the doleful mouse-squeaks of the architect, and the final crash of collapsing pretensions. But it's a virtuoso performance which, like juggling or the manoeuvres of massed bands, brings with it a kind of weari- ness. Tati's approach to comedy remains gaullist in the philosophical intransigence of its timing; visually, the film has a cold, dry, blue- glass clarity. Skyscraper jokes build with huge deliberation, vaster than empires yet more slow, or explode out of silence —like the moment when two battle-scarred tourist lines splendidly confront each other across the width of an escalator. Playtime has all the theoretical virtues, including a shy geniality: it simply doesn't make you laugh very much.

The White Bus comes late to its destination, an independent, wry-edged forty- five-minute fantasy about a girl's return from London to a northern town, and what she sees when she joins the indifferent citizenry, the toytown mayor and mace-bearer and some inscrutable Africans on a dreamy sight-seeing tour. Plump officialdom confronts a landscape by turns ominous and absurd, where the city park is an ironic reminder of Fragonard, or a woman runs from a kidnap car through an

empty square. A Civil Defence exercise—air- raid siren wail on the soundtrack, while hoses play over a dummy building—stirs layers of echoes, of which only the first is the tribute to Humphrey Jennings; a long level look at street- lamps by night captures Anderson's own oblique and truculent lyricism. But the film also seems to me to lack the bite of the specific: oddly, for a work so complex in its moment- to-moment reactions, it seems to put Official- dom, Industry, Nostalgia into generalised capital letters.