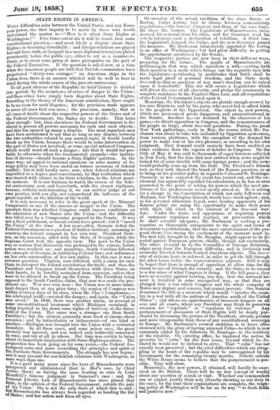 Wires difficulties arise between the United States and any Euro- pean power, the first inquiry to be made by those who would understand the matter is—" How is it about State Rights at Washington ?" Five times out of six it will be found that some eonstitutional question,—and most likely a dispute about State Rights—is becoming formidable ; and foreign relations are played fast and loose with, or (to speak in a more diplomatic tone) are placed prominently before the public eye, either to act as a counter-ir- ritant, or to cover some grasp at more prerogative on the part of the Federal Executive. If the question is asked now, at a time when the American people are told that British commanders have perpetrated "thirty-two outrages" on American ships in the Cuban Seas, there is an answer which it will be well to bear in mind during the whole course of the present controversy.

To all good citizens of the Republic its brief history is divided into periods by the occurrence of crises of danger to the Union ; and those crises have simply been disputes 'taut State Rights. Aecording to the theory of the American constitution, there ought to be no room for such disputes ; for the provision made appears to cover all eases that can arise ; the provision, namely, that in all cases of doubt about the respective powers of the States and of the Federal Government, the States are to decide. This looks clear enough : but, then elsewhere the Federal Government is de- clared to possess all powers necessary for such and such objects ; and this has opened up many a dispute. The most sagacious men have been accustomed to say that as long as any dispute between the two authorities related to any normal topic, it would hardly break up the Union, because there would be some intervention on the part of States not involved, or some special action of Congress, which would ward off such a danger ; but that it would too pro- bably be otherwise when the fundamental anomaly—the institu- tion of slavery—should become a State Rights' question. In the same way, an appeal to national emotions on some matter of fo- reign policy may have been useful on former occasions of federal conflict; but it will hardly serve now, when federal relations are imperilled to a degree past concealment, by that institution which was treated with silence in its State relations, to the latest possi- ble moment. It is our business to watch the course of the fede- ral controversy, now and henceforth, with the closest vigilance, because, without understanding it, we can neither judge of our own position with our ally, nor comprehend the influence of the great republic on the liberties of the world. It is only necessary to refer to the great epoch of the Missouri Compromise as one of the seasons of danger to the Union. The question then was whether Congress could impose conditions on the admission of new States into the Union : and the difficulty was tided over by a Compromise proposed in the Senate. It was not a final settlement, as recent events have proved ; but it "saved the Union" at the time. A few years after, Georgia defied the Federal Government on a question of Indian territory, assuming to construe the federal compact in her own way. President Jack-- eon, on his accession, sided with the State of Georgia, while the Supreme Court took the opposite view. The peril to the Union was so serious that discussion was prolonged to the utmost, before action was resolved on : and meantime South Carolina followed the example of Georgia, in nullifying Federal laws and ordinances on her own construction of her own rights. In this case it was a revenue question. Virginia soon followed, with a claim for each State to interpret the federal constitution for itself; and thus the President and Congress found themselves with three States on their hands to be forcibly restrained from secession, unless they were to be Idlowed to break up the Union. The President being opposed to the South Carolina claim, that case was made the pro- minent one. War was verynear ; the Union was in more immi- nent danger than at any prior time ; the session of Congress was within fourteen days of its close when Mr. Clay's Compromise,—. his celebrated tariff,—averted the danger • and again, the "Union was saved." In 1836, there was another alarm, on account of some unconstitutional treatment which Michigan sustained, in being required to lay down some rights of territory at the thres- hold of the Union. Her cause was a stronger one than South Carolina's ; but the citizens generally were tired of alarms about secession ; and by intimidation or inducement—of one kind or another,---Michigan was brought into the Union with a restricted boundary. In all these cases, and some minor ones, the great anomaly was ignored, and was indeed only indirectly concerned in some, and not at all in others. But time was certain to bring about its immediate implication with State-Rights questions. The preparation has been going on for some years,—the Federal Go- vernment more and more overriding the principles and spirit of the Northern State Governments. The struggle has now begun ; and, it may account for our ticklish relations with Washington, in more ways than one.

It is a good many years since the laws of Massachusetts were interpreted and administered (first in Mid's case, by Chief Justice Shaw) as having the same bearing as ours in Lord Mansfield's famous judgment in Somerset's ease : and the Personal Liberty Law of Massachusetts has since placed that State, in the opinion of the Federal Government, outside the pale of the Union. She is not the only State of which this is said ; but Massachusetts has always been regarded as heading the list of States; and her action now fixes all eyes.

On occasion of the actual rendition of the slave Burns, at Boston, Judge Loring had, to choose between contradictory requisitions,—the laws of Congress and those of his own State. He chose the former. The Legislature of Massachusetts twice decreed his removal from his office, and the Governor used his veto to intercept such a declaration of rebellion. A third time the Legislature deposed the Judge, and the new Governor passed the measure. Mr. Buchanan immediately appointed Mr. Loring to an office at Washington ; but had great difficulty in getting the appointment sanctioned by the Senate.

The respective parties are now busy in their different ways, preparing for the future. The people of Massachusetts are petitioning in that way which manifests a will,—setting forth their question in a mode which brings out the requisite men into the legislature—petitioning in multitudes that birth shall be made legal proof of personal freedom, and the State made free-soil so that no question of any man's freedom can be raised upon it henceforth. This stir will create a Legislature whieli will divest the case of all obscurity, and pledge the community to complete resistance to the Fugitive Slave Law, and all requisitions of the Federal Government based upon it.

Meantime, the President's objects are plainly enough avowed by his own Ministers and by his party, who never fail to afford hinta to the prophets Of the Opposition. One object is, new powers,, which are pronounced great, dangerous, and unconstitutional in. the Senate. Another 15,—as declared by the observers of hia game,—to divert opposition in Congress, and the remonstrances of the people at large, about free-soil questions. During the great New York gatherings early in May, the course which Mr. Bu- chanan was about to dike was indicated by Opposition spokesmen, from various platforms, with the exception of the demand for power to make war at his own pleasure, or according to his own, judgment. That demand could scarcely have been credited on other evidence than the reports of debates in Congress. On the 11th of May it was said to thousands of eager listeners collected in New York, that the time had now arrived when news might be looked for of some trouble with some foreign power ; and the news would probably come up from the Gulf. The President's friends had, as they said, cleared the board of the Kansas question, so as to bring on his peculiar policy in regard to Cuba and St. Domingo. Precisely as was expected the event has turned out, and the ex- citement has apparently equalled his calculation, as he has at One, proceeded to the point of asking for powers which the most am- bitious of his predecessors never openly aimed at. He is asking for a change in the Constitution at which not only Jefferson and Madison, but Washington himself, would have stood aghast ; and, as his personal adherents hoped, some leading opponents of his Kansas policy are using the opportunity to make their peace with their old chief, in the interval of the free-soil war- fare. Under the name and appearance of requiring powers of summary repulsion and reprisal, on provocation which lie shalt consider adequate Mr. Buchanan is seeking a pre- rogative so thoroughly antagonistic to the spirit and forms of democratic republicanism, that the mere entertainment of the pro- posal shows how strong the excitement of the moment must be. The first bill, brought in by Mr. Douglas, might appear to be di- rected against European powers chiefly, though not exclusively. The other, brought in by the Committee of Foreign Relations, edges away from the European difficulty, and is obviously and avowedly directed towards Central American objects. The neces- sity of extreme haste is enforced, in order to get the bill through the other house before the representatives adjourn. Still it may be hoped that there is enough of opposition to allow time for the alarm to spread through the country, and the States to be roused to a due sense of what Congress is doing. If the bill passes they have no security against hearing, any day, that the national nour is involved in some unexpected way, or that they are plunged into a war which Congress and the whole company of States may deplore and censure, but cannot prevent. One Senator denounces the bill as a measure which would "involve the coun- try in a war with all the nations of America south of the United States" ; and others are apprehensive of incessant dangers on all seas and all coasts, where any President may think he perceive's occasion for " reprisals " or "repulsion by violence." Any postponement of discussion of State Rights will be dearly pur- chased by increasing the powers of the President, already greater and more irresponsible than those of any constitutional sovereign in Europe. Mr. Buchanan's avowed ambition is to leave Office crowned with the glory of having annexed Cuba—to which is now commonly added by his followers St. Domingo—to the territory of the republic. On entering office, he implored the nation to preserve its " calm" for the four years, beyond which he de- clared he would not be induced to serve. That " calm " has not exactly been preserved ; but the vital difficulties which are strug- gling at the heart of the republic may be unrecognized by his Government for the remaining twenty months. Nobody outside the White House seems to believe that the postponement is pos- sible. Time will show.

Meanwhile, the new powers if obtained, will hardly be exer- cised on the Britian. There will be no war (except of words) about any question of search or visit. Whether our commanders can or cannot justify their acts (thereby showing us our duty in the case), by the time their explanations are complete, the reign- ing policy at Washington will be far on its way to fresh field* and pastures new."