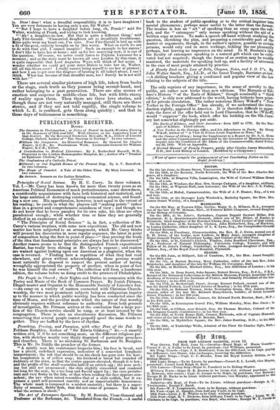 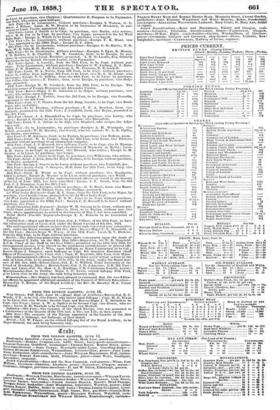 Cornet F. G. A. Fuller to be Lieut. by purchase, vice Williams, promoted.

9th Light Drags.—Capt. C. C. Brooke, from the Royal London Militia, to be

Ensign B. H. Burke to be Lieut, without purchase, vice Murphy,- appointed to the

24th Foot-Ensign W. W. Goodrich, from the 20th Foot, to be Ensign. The Christian names of Ensign Henznessy are Alexander Carden. 37th Foot-Brevet-Major E. D. Atkinson to be Major, without purchase, vice Lewis, who retires upon full-pay. 99th Foot-Ensign F. Trotter, from the 224) Foot, to be Ensign, vice Gosselin, appointed to the 234 Foot. 40th Foot-Capt. C. F. Shawe, from the 4th Drag. Guards, to be Capt. vice Brod- horst, who exchanges. 41st Foot-To be Ensigns without purchase-T. P. A. Bracken, Gent. vice Jemmett, promoted in the 151h Foot ; J. Caulfield, Gent. vice Rene, promoted in the 16th Foot. 47th Foot -Lieut. J. A. Bloomfield to be Capt, by purchase, vice Lowry, who retires ; Ensign J. Stanley to be Lieut, by purchase, vice Bloomfield. Hi Foot-Lieut. T. A. Julian to be Adjt. vice Stopford, who resigns the Adju- tancy only.

Royal Canadian .14/10 Regiment-Ensign W. H. Surtnan to be Lieut. without pur. Gold Coast Artillery Corps-E. Hewett, Gent, to be Ensign, without pur. vice Clark, whose appointment, as stated in the Gazette of Slay 7, has been cancelled. Royal Malta Fencible Regiment-Ensign T. E. Bonavia to be Instructor of Musketry. Cisattached.-Major and Brevet Lieut.-Col. J. Villiers, of the 97th Foot, to bare the substantive rank of Lieut.-Col. under the Royal warrant of 6th Oct. 1854. "The undermentioned officers to have their brevet rank converted into substantive rank, under the Royal warrant of 6th Oct. 1854-Brevet-Major C. E. Mansfield, of the 33d Foot ; Brevet-Major W. Worry, of the 34th Font; Lieut. It. V. Dickens, from the 64th Foot, to be eapt.without purchase.

Brevet.-The following promotions to take place consequent upon the death of Major-General T. Falls, on the 26th May 1858-Major-Gen. Sir W. R. Mansfield, K.C.B. Chief of the Staff in the East Indies, promoted on the 18th May 1858, for distinguished service, to be placed on the permanent establishment of general offi- cers; Brevet-Lieut.-Col. C. Wise, upon half-pay as Major Unattached, to be Col.; Brevet-Major J. Sampson, upon half-pay as Capt. 8th Garrison Battalion (Staff Officer of Pensioners), to be Lieut.-Col. ; Capt. H Reynolds, 58th Foot, to be Major. The undermentioned officers, having completed three years' actual service in, the rank of Lieut.-Cols. to be promoted to be Cols, in the Army, under the Royal war- rant of 6th Oct. 1854-Brevet-Lieut.-Col. E. C. Wilford, Chief Instructor of the School of Musketry, Hythe ; Brevet-Lieut.-Col. J. D. Johnstone, C.B. 334) Foot ; Capt. and Lieut.-Col. the Hon. A. E. Harding,e, C.B. Coldstream Guards, Assist.- Quartermaster-Gen. in Dublin ; Major J. 0. Lewis, retired full-pay 37th Foot, to be Lieut.-Col, in the Army. the rank being honorary only.

Mentorandum.-Her Majesty has been pleased to command that the two follow- ing officers be appointed additional members of the Council of Military Education- Brevet-Col. T. Elwyn, of the Royal Artillery ; the Rev. H. Moseley, M.A. Canon of Bristol.

FROM THE LONDON GAZETTE, JUNE 18. WAR OFFICE, Pall Mall, June 18.-Royal Regt. of Artillery-Brevet-Col. E. C. Warde, C.B. to be Col. vice Fraser, who retires upon full-pay ; Capt. M. 0. Nixon to be Lieut.-Col. vice Warde ; Second Capt. and Brevet-Major J. E. Michell to be Capt. vice Nixon ; I.ieut. A. W. A. Ogilvie to be Second Capt. vice Dowse, who re- signs; Lieut. R. H. Newbolt lobe Second Capt. vice Michell. Infantry-19th Foot-The surname of the third Ensign, who was promoted to a Lieutenancy in the Gazette of the 15th inst. is Iles, not Islis, as then stated.

49th Foot-The surname of the Ensign appointed in the Gazette of the 30th March 1856, is Dolmage, not Dalmage, as then stated.

Brevet.-Col. W. Fraser, on the retired full-pay list of the Royal Artillery, to be Major-General, the rank being honorary only.