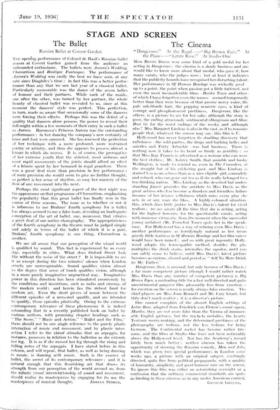 MISS BETTE DAVIS won some kind of a gold medal for her acting in Dangerous : the cinema is a shady business and one would like to know more about that medal, who gave it. how many carats, who the judges were : but at least it indicates that the publicity hounds have recognised her disturbing talent. Her performance in Of Human Bondage was wickedly good -

up to a point, the point when passion got a little tattered, and even the most inconsiderable films--Border Town and other.; of which I have forgotten even the names --seemed temporarily better than they were because of that precise nervy voice, the pale ash-blonde hair, the popping neurotic eyes, a kind of corrupt and phosphorescent prettiness. Dangerous, like the others, is a picture to see for her sake, although the story is poor, the ending atrociously sentimental (Dangerous and Show Boat tie for the worst endings of the week), and although alas ! Miss Margaret Lindsay is also in the cast. as if to reassure people that, whatever the censor may say. this film is U.

Hollywood has never forgotten its startling discovery that raffishness—the wild parties, the drugs and bathing belles and suicides and Fatty Arbuekle---was bad business. There is nothing now it takes to its heart. so firmly as gentility : so that Miss Kay Francis is advertised as a woman who can wear the best clothes ; Mr. Aubrey Smith, that amiable and bushy Wellington. is made to remind us. even in The Crusaders, of the straight bat of his (Ticketing past, and Miss Lindsay is starred less as an actress than as a nice eligible girl, comradely and refined, who can pour out tea as if she really belonged to a tea-drinking nation. Miss Lindsay as the deserted but under- standing fiancee provides the apt idote to Miss Davis as the great actress who has become a drunken and friendless failure because of her intense selfishness which ruins every play she acts in or any man she likes. A highly-coloured situation, this, which does little justice to Miss Davis's talent for vivid realism we are aware all the time that she is acting, acting for the highest honours. for the questionable carats, acting with immense virtuosity. from the moment when the successful young architect (Mr. Franehot Tone) spots her in the speak- easy. For Hollywood has a way of refining even Miss Davis : another performance so horrifyingly natural as her mean greedy little waitress in Of Duman Bondage and her film career would have been ruined : and so with great ingenuity Holly- wood adopts the homeopathic method, doubles the gin, multiplies the drink stains. intensifies the squalor, until you can safely cease to believe, until Miss Davis's latest picture becomes as curious, absurd and period as " Sell No More Drink to My Father."

Dangerous, then, is unusual, but only because of Miss Davis : a far more competent picture (though I would rather watch Miss Davis than any number of competent pictures) is Big Brown Eyes, a misleading title for a fast well-directed and quite unsentimental gangster film, pleasantly free from emotion— for emotion on the screen is nearly always false emotion. The chief players are Miss Joan Bennett and Mr. Cary Grant, but they don't much matter : it is a director's picture.

One cannot complain of the absurd English settings of

Letzte Bose, adapted from Friedrich von Flotow's comic opera, Martha, they arc not more false than the Vienna of innumer- able English pictures, but the tra-la-la melodies, the hearty Teutonic merry-making, and the deter ' ed prettiness of the photography are tedious, not the less tedious for being German. The Continental racket has become rather tire- some, and the films at Studio One have not been noticeably above the Hollywood level. Nor has the Academy's record lately been much better ; neither cinema has taken the opportunity of showing the Russian comedy, Men and Jobs, which was given two special performances in London some weeks ago, a picture with an original subject, excitingly directed, quite free from political propaganda, with a quality of humanity, simplicity and good-humour rare on the screen. To ignore this film was either an astonishing oversight or a confession that the ordinary commercial standards are quite as binding in these cinemas as in any under American control.