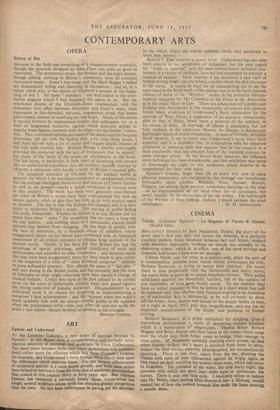 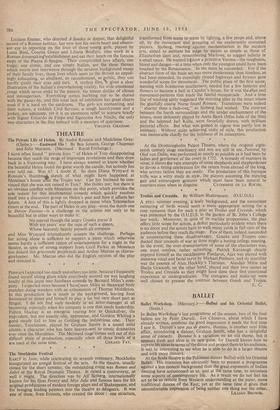 BRILLIANTLY directed by Jean Negulesco, Titanic, the story of the great liner's first and only trip across the Atlantic, is a perfectly excellent picture, finely balanced between fact and fiction, stocked with plausible characters, working up quietly but strongly to its shattering climax, which is, in effect, one of the most moving and dramatic half-hours I have ever sat through.

Clifton Webb, cast for once in a serious role, plays the part of a cosmopolitan socialite from whose idiotic pretensions his wife, Barbara Stanwyck, is trying to rescue their children. He wants them to dine perpetually with the Metternichs and marry snobs; she wants them to grow up as sound American citizens.. Their polite acidulated quarrels are beautifully handled,, full of the sadness of lost happiness, of love gone slowly astray. To the watcher they have an added piquancy in that he knows in a short while they will be rendered void, that whether little Norman is going to be American or of nationalite Ritz is immaterial, as he will' probably be dead. All the hopes, fears, desires and dreads of the people before us may, on a night in April, 1912, pale into insignificance, and one has an impatient consciousness of the fatuity and pettiness of human striving.

Richard Baseheart, as a priest 'unfrocked for drinking, gives a marvellous performance, a study of despairing sodden- kindness which is a masterpiece of observation. Thelma Ritter, Robert Wagner and Brian Aherne add their lustre to the scenes which range over the whole ship,, from boiler room to• bridge, from steerage to state cabin. M. Negulesco carefUlly covering every corner, so that when disaster strikes, one's heart is involved from bows to stern. Indeed the final scenes, superbly photographed, are extraordinarily upsetting. There is one shot, taken from the sea, showing the Titanic with rows of men silhouetted against its bright lights as they stand on deck watching the women draw away, which can never be forgotten. The calmness of the water, the cold starry night, the slowness with which this great liner sinks seem, to accentuate the horror. There is only one false note. I resolutely refuse to believe that Mr. Webb, when putting Miss Stanwyck into a lifeboat, would remind her of how she walked towards him under the limes wearing a muslin dress. Luciano Emmer, who directed A Sunday in August, that delightful record of a Roman holiday, has now lent his warm heart and observ- ant eye to reporting on the lives of three young girls, played by Lucia Bose, Cosetta Greco and Liliana Bonfatti, who work in a Roman dressmakinrestablishment and eat their lunch on the famous steps of the Piazza di Spagna. Their complicated love affairs, one tragic, one comic, and one simply Italian, are the three themes which weave and interweave through the strident background music of their family lives, those lives which seem to the British so appall- ingly exhausting, so ebullient, so cacophonoui, so public, they can hardly credit their eyes and ears. A restless film,lt gives a clear illustration of the Italian's overwhelming vitality, his wide emotional Jange which never, sinks to the passive, his innate dislike of silence and introspection. Everything comes burbling out to be shared with the passer-by, and this total lack of inhibition has great charm even if it is hard on the eardrums. The girls are enchanting, and their suitors, a caddish Civil Servant, a tough laundryman and a jockey, are adequate, yet it is an enormous relief to sojourn briefly with Signor Eduardo de Filipo and Signorina Ave Ninchi, the only two characters in the film imbued with a measure of quietness.