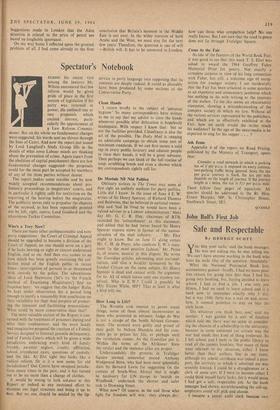 Who's a Tory Now?

There are many other unobjectionable and non- party suggestions: the Court of Criminal Appeal should be upgraded to become a division of the Court of Appeal, no one should serve on a jury if he lacks hearing or sight or cannot understand English, and so on. And then on comes to an item which has been greatly exercising the col- lective mind of the English public in recent times—interrogation of persons in or threatened with custody by the police. The adventurous ideas of Lord Shawcross ('let's try the French method of Examining Magistrates') find no response here : 'we suggest that the Judges' Rules be kept under observation for a period long enough to justify a reasonably firm conclusion on their suitability for their dual purpose of protect- ing the innocent and facilitating prosecutions.' What could be more conservative than that?

The mast valuable section of the Report is con- cerned with the treatment of prisoners during and after their confinement; and the most heady and imaginative proposal the creation of a Family Service designed to forestall juvenile delinquency, and of Family Courts which will be given a wide jurisdiction embracing every kind of family trouble, parental neglect, cruelty, affiliation, school attendance cases, questions of custody, and the like. At first sight this looks like a radical reform. Or is it a new name for old jurisdictions? Our Courts have swapped jurisdic- tions many times in the past; and it has turned out to be no more than a change of clothes.

It would be wrong to look askance at this Report or indeed at any sustained effort to examine our legal structure and bring it up to date. But no one, should be misled by the lip-

service to party language into supposing that its contents are deeply radical. It could as plausibly have been produced by some sections of the Conservative Party.