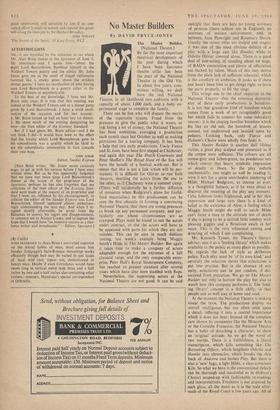 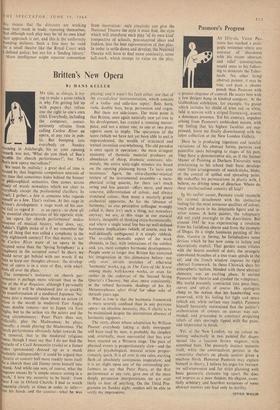 There can be few who will dispute the merits of the repertoire system. Freed from the pressure to give the public what it wants, or risk losing a lot of money, the National Theatre has been ambitious, averaging a production each month since last October as well as making provisions for a touring company. It has been a help that two early productions, Uncle Vanya and St. Joan, have been first shaped at Chichester, and again this year The Dutch Courtesan and Peter Shaffer's The Royal Hunt of the Sun will have the benefit of a festival work-out. But it seems that this is not a link which will be per- manent. It is difficult for Olivier to run both theatres, shuttling the actors from the one to the other, as if Chichester were a summer camp. (There will incidentally be a further diffusion of resources when Redgrave's plans for Guild- ford materialise.) In this predicament can be seen the first obstacle to forming a convincing National Theatre, that there are strong pressures to break up any permanent company, and par- ticularly one whose circumstances are so cramped. Plays must be found to suit the actors under contract, or else the actors will have to be appeased with parts for which they are not suitable. This can be seen in much dubious casting, last week's example being Maggie Smith's Hilde in The Master Builder. But again it takes time to make a company of actors adaptable enough for the extremes of a full classical range, and the only comparable enter- prise, Peter Hall's' Royal Shakespeare Company, has reached its present standard after several years which have also been studded with flops.

Nevertheless, the supporting actors at the National Theatre are not good. It can be said

outright that there are here no young actresses of promise (there seldom are in England), no actresses of mature achievement, and, in between, Joan Plowright and Rosemary Harris. Usually the minor roles are insipid and stagey; it was one of the most obvious defects of a play with a large cast like Hamlet, while in Othello Olivier towered alone. There is a good deal of non-acting, of standing about on stage, of RADA enunciation and plenty of affectation not backed by talent. Much of this may derive from the plain lack of sufficient rehearsal, which is the corollary of ambition. It looks as if there just hasn't been time to get things right, to learn the parts properly, to fill the stage.

This brings one to the chief objection to the National Theatre—that the common denomia- • ator of these early productions is boredom. It is not that grandiose kind of boredom which comes from a work of art recognisably good but which fails to connect for some subsidiary reason: it is the cloying familiar boredom which fits like an old suit, the boredom of lessons conned, not understood and insisted upon by pedants. Looking back, only Vanya and Hobson's Choice were wholly free from it.

This Master Builder is another dull lifeless victim, a great play scalped and presented as if the corpse were sufficient. The colours are all mouse-grey and lichen-green, on ponderous sets which convey that heavy symbolic impression so deadly to Ibsen. So the play unfurls mechanically; one might as well be reading it, were it not for a quite unorthodox rendering of Hilde. Michael Redgrave, as intense as ever, is a thoughtful. Solness, as if he were about to discover the meaning of the play any moment. Celia Johnson looks frightened, and in her thin expression and large eyes there is a kind of belief in the existence of Aline, a feeling which Maggie Smith might do well to catch. Hilde can't force a man to the ultimate test of death if she is going to be a skittish little tomboy with pleasing giggles and a flirtatious catch in her voice. "[his is the very whimsical casting and directing of which I am complaining.

Mr. Kenneth Tynan, the Theatre's literary adviser, sees it as a `lending library' which makes available to the public as many plays as possible. He regards the lack of style as deliberate policy. Each play must be 'of its own kind,' and certainly the selection shows that eclecticism is put into practice. But in the absence of any unity, eclecticism can be just random, if dis- sociated from execution. We go to 7'he Master Builder not only to borrow the play but also to watch how this company performs it. The 'lend- ing library' concept is a little chilly, in that people can as well stay at home and read.

At the moment the National Theatre is making visual the texts. The productions display no overall intelligence, but too often seize upon a detail, inflating it into a central importance which it does rlot bear. Instead of the complete care shown by companies like the Moscow Arts or the Comddie Francaise, the National Theatre has a habit of detaching a character, to show an 'original' attitude. So we get the worst of two worlds. There is a faithfulness, a literal transcription, which kills something like The Recruiting Officer, which lengthens Othello and Hamlet into chronicles, which breaks the thin back of Andorra and hashes Play. But there is also a 'new' lago, a light Hilde, a class-conscious Kite. So what we have is the conventional (which can be thorough and successful as in Hobson's Choice) souped-up with fashionable re-readings and interpretations. Freshness is not acquired by such gloss, all the more as it is the stale after- math of the Royal Court a few years ago. All of this means that the directors are working over their stock in trade, repeating themselves; lhat although each play may be 'of its own kind' (heir approach is not, and this is the uniformity breeding dullness. Such a line may be valid for a small theatre like the Royal Court with a defined policy, but not for a 'lending library.'

More intelligence might separate convention from innovation: only creativity can give the National Theatre the style it must find, the style which will transform each play 'of its awn kind' irrespective of schools, preconceived ideas and fashion, into the best representation of that play. In order to settle down and develop, the National Theatre will have to find some continuity, some hall-mark, which stamps its value on the play.