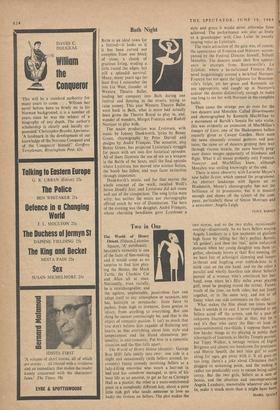 it has been carved out complete from one block of stone, a chunk of gracious living, eroding a little round the edges, but still a splendid survival.

Many, many years ago (at least five) I remember the

late Liz West, founder of Western Theatre Ballet, leading her company into Bath during one festival and dancing in the streets, trying to raise money. This year Western Theatre Ballet were back in Bath, what is more had actually been given the Theatre Royal to play in, and, wonder of wonders, Margot Fonteyn and Rudolf Nureyev to play with.

The major production was Lysistrata, with music by Johnny Dankworth, lyrics by Benny Green, choreography by Peter Darrell and designs by Andre Francois. The scenarist, also Benny Green, has projected Lysistrata's struggle for peace with sex into five historical episodes. All of them illustrate the use of sex as a weapon in the Battle of the Sexes, until the final episode where Lysistrata has moved into science fiction, the bomb has fallen, and man faces extinction through impotence.

Dankworth's music, and for that matter the whole concept of the work, recalled Weill's Seven Deadly Sins, and Lysistrata did not come well out of the comparison. The song lyrics were witty, but neither the music nor choreography offered much by way of illumination. The hero of the evening was the designer, Andre Francois, whose charming bawdiness gave Lysistrata a

style and grace it would never otherwise have achieved. The performance was also as lively as a grasshopper with Cleo Laine in sweetly rasping voice as Lysistrata.

The main attraction of the gala was, of course, the appearance of Fonteyn and Nureyev, accom- panied by the Festival Director himself, Yehudi Menuhin. The dancers made their first appear- ance in excerpts from Bournonville's La, Sylphide, where a be-tarlataned Fonteyn flut- tered languishingly around a be-kilted Nureyev. Fonteyn has not quite the lightness for Bournon- ville's Sylph, yet her grace and Romantic air are appropriate, and caught up in Nureyev's ardour she dances distinctively enough to make one long to see her with Nureyev in the complete' ballet.

Then came the strange pas de trois for the two dancers and Menuhin. Called Divertimento and choreographed by Kenneth MacMillan to a movement of BartOk's Sonata for solo violin, this was evidently an extension of MacMillan's Images of Love, one of the Shakespeare ballets recently given at Covent Garden. Here were the same sinuously oriental gestures and pos- tures, the same air of dancers groping their way through viscous treacle, the same heavily preg- nant dance images apparently of blindness and flight. What it all meant probably only Fonteyn, Nureyev and MacMillan knew, although Menuhin was smiling knowingly at the end.

There is more obscurity with Laverne Meyer's new ballet Sextet, which opened the programme. An abstract landscape with figures set to Hindemith, Meyer's choreography has not the brilliance, of its pretensions, but it is musical enough and shows off the talents of the com- pany, particularly those of Simon Mottram and a newcomer, Angela Leigh.