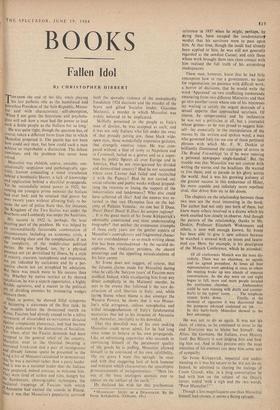 ProwARDs the end of his life, while playing I. his last pathetic role as the humiliated and Powerless President of the Salo Republic, Musso- lini said with characteristic self-absorption, When I am gone the historians and psycholo- gists will ask how a man had the power to lead such a fickle people as the Italians for so long.'

He was quite right, though the.question has, of course, taken a different form from that in which Mussolini proposed it. The puzzle has not been how could any man, but how could such a. man achieve so improbable a distinction. The debate continues, and the problem has never been. solved.

Mussolini was childish, coarse, unstable, con- stitutionally suspicious and pathologically ego- tistic, forever concealing a timid irresolution behind a bombastic bluster, a lack of knowledge and application behind a deceitful propaganda. Yet he successfully seized power in 1.922, be- coming the youngest prime minister the Italians had ever had; and he retained that power for over twenty years without allowing Italy to be- come the sort of police State that, for instance, the Kingdom of the Two Sicilies was under the Bourbons and Lombardy was under the Austrians.

His success in 1922 is, perhaps, the least Puzzling part of the problem. He was helped by all extraordinarily favourable combination of circumstances, including an economic crisis, a split working class and the complaisande, if not the complicity, of the middle-class political Parties. He was helped, too, by a physical Presence not yet devitalised by illness, by a style of oratory, staccato, tautophonic and responsive, not yet ridiculed by caricature and by a per- suasive charm not yet atrophied by adulation. But there was much more to his success than

Whether by native instinct or by shrewd calculation, he was a superb opportunist, a highly flexible agitatore, and a master in the political art of dividing enemies by insinuating wedges between them.

Once in power, he showed fitful symptoms of becoming a statesman of the first rank.' In the months before the threatened march on Koine, Fascism had already ceased to be a leftist Movement of dissatisfied ex-servicemen directed against complacent plutocracy, and had become Party dedicated .to the destruction of Socialism. Yet when, after the Fascist demands had been accepted to the general relief of the country, Mussolini went to the Quirinal (wearing a borrowed frock-coat and a pair of incongruous and already famous spats) he presented to the king a list of Ministers'calculated to demonstrate that he was a national rather than a party leader. And it was as a national leader that the Italians They prepared, indeed anxious, to welcome him. the were tired of strikes and riots, hungry for lite flamboyant, choreographic techniques, the r°ediLeval trappings of Fascism with which .0'Annunzio had excited the crowds in Fiume. Thus it was that Mussolini's popularity survived both \the sporadic violence of the undoubtedly fraudulent 1924 elections and the murder of the brave and gifted Socialist leader, Giacomo Matteotti, a murder in which Mussolini was widely believed to be implicated.

Skilfully presented to the people as Italy's man of destiny, he was accepted as such; and it was not only Italians who fell under the sway of that proudly jutting jaw, those black wide- open eyes, those wonderfully expressive gestures, that strangely emotive voice. He was com- pared without a hint of irony to Napoleon and to Cromwell, hailed as a genius and as a super- man by public figures all over Europe and in America. Had he not reinvigorated his divided and demoraliSed country? Had he not succeeded where even Cavour had failed and reconciled it with the Papacy? Had he not carried out social reforms and public works without jeopard- ising the interests or losing the support of the industrialists arid landowners? Who else could have achieved all this? And the answer was re- turned to that vast Olympian face on the bal- cony of Palazzo Venezia: no one but 11 Duce. Duce! Duce! Duce! 11 Duce ha sempre ragione!

It is the great merit of Sir Ivone Ktrkpatrick's admirably constructed, and niost understanding biography!' that neither the evanescent triumphs of those early years nor the gentler aspects of Mussolini's contradictory and fragmented charac- ter are overshadowed—as so much writing about him has been overshadowed—by the squalid de- ceptions, the vindictive pettiness, the absurd posturings and the appalling miscalculations of his later career.

Sir Ivone does not suggest, of course, that the fulsome, claims made for Mussolini. during what he calls the 'halcyon years' of Fascism were justified. Indeed, while exculpating him from any direct complicity in the Matteotti murder, he sees in the events that followed it the sure de- struction of civil liberties in Italy; and, while laying blame where blame is due amongst the Western Powers, he shows that it was Musso- lini's wild arrogance, callous xenophobia and wilful misapprehension of Italy's fundamental necessities that led to his 'invasion of Abyssinia and, thereafter, inevitably to his downfall.

That this downfall was of his own making Mussolini could never admit, for he had long since come to believe in his own propaganda. Like an advertising copywriter who succeeds in convincing himself of the paramount quality of the goods he is puffing, Mussolini allowed himself to be convinced of his own infallibility. 'On my grave I want this epitaph,' he once said with that staggering lack of both humour and restraint which characterises the apocalyptic pronouncements of mclagomaniacs: '"Here lies one of the most intelligent animals ever to appear on the surface 9f the earth."' He declared his wish for this posthumous

I. MUSSOLINI : STUDY OF A DEMAGOGUE. By Sir Ivone Kirkpatrick. (Odhams, 45s.)

reference in 1937 when he might, perhaps, by dying then, have escaped the condemnatory verdict that his survivors were to pass upon him. At that time, though the insult had already been applied to him, he was still not generally regarded as the sawdust Caesar; and only those whose work brought them into close contact with him realised the full truth of his astonishing inadequacies.

These men, however, knew that he had little conception how to run a government, no taste for organisation, no patience with difficult work, a horror of decisions, that he would write the word 'Approved' on two conflicting memoranda emanating from two different Ministries and then go into another room where one of his mistresses lay waiting to satisfy the urgent demands of a sexual appetite that approached satyriasis. Of course, by temperament and by inclination he was not a politician at all, but a journalist whose genius—as he was proud to suggest him- self—lay essentially in the manipulation of the masses by the written•and spoken word, a mart who governed Italy (to use one of those pertinent phrases with which Mr. F. W. Deakin so brilliantly illuminated the catalogue of errors in The Brutal Friendship) 'as if he were running a personal newspaper single-handed.' But the trouble was that Mussolini was not content with writing the stories and the, headlines. He wanted to live them, and to parade in his glory across the world. And it was his gnawing jealousy at the greater success in this endeavour of Hitler, his more capable and infinitely more repellent rival, that drove him on to his doom.

The chapters on the relationship between these two men are the most interesting in the book. The author had not only met both of them, but knew many others involved in a drama which his work enabled him closely to observe. And though the pattern of the relationship, thanks to Mr. Deakin, Professor Elizabeth Wiskemann and others, is now well enough known, Sir Ivone has been able to give it new colours because he watched it unravel with an intent and fascin- ated eye. Here, for example, is his description of the Munich Conference, which he attended:

Of all conferences Munich was the most dis- orderly. There was no chairman, no agenda and no agreed procedure. At times all four representatives were speaking at once, at others the meeting broke up into islands of separate conversations. As the day wore on and night began to fall, more and more people invaded the conference chamber. . . . Ambassadors could be seen running• with drafts and counter- drafts to the typists' room. . . . The telephone system broke down. . . . Finally, at the moment of signature it was discovered that the pompous inkstand contained no ink.. . . In this hurly-burly Mussolini showed to the best advantage.

He was not to do so again. It was not his fault, of course, so he continued to insist to the end. Everyone was to blame but himself : the Allies, the Germans, the Italians, even History itself. But History is now judging him and find- ing him out. And in this process only the most relentless of his enemies can deny him some sort of sympathy.

Sir Ivone Kirkpatrick, impartial and under- standing as it was his nature to be, did not do so. Indeed, he admitted to sharing the feelings of Count Grandi, who, in a long conversation he had with him on the subject of the Duce's career, ended 'with a sigh and the two words, "Poor Mussolini!"' Though a less magniloquent one than Mussolini himself had chosen, it seems a fitting epitaph.