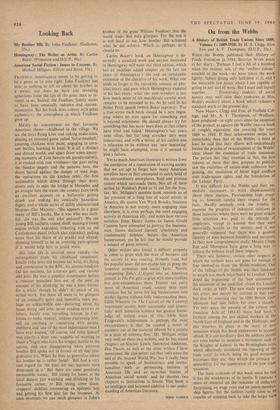 Hemingway : The Writer as Artist. By Carlos FRATERNAL reminiscence seems to be getting to be a genre in its own right. John Faulkner has next to nothing to tell us about his brother as a writer, nor does he have any revealing aphorisms from the lips of the great man to re- count to us. Indeed, the Faulkner family seems to have been unusually indrawn and uncom- municative. But his book does convey with great authenticity the atmosphere in which Faulkner grew up.

Mainly he concentrates on that favourite American theme—childhood in the village. We see the boys flying kites and risking snake-bites, playing an invented game called 'horse-baseball,' covering chickens with paint, engaging in corn- cob battles, learning to hunt. It is all a distinct and distant world, and apart from some annoy- ing moments of Tom Sawyer-ish pseudo-naivety, it is evoked with real vividness—the goat eating the Sunday papers and the panama hats, the doors barred against the danger of mad dogs, the operations on the kitchen table, the first automobile which drove through their dusty streets only to miss the bridge at Memphis and go straight into the water, the country fairs (with an excellent account of a balloonist getting drunk and making his comically hazardous flight), and a whole series of deftly characterised Negroes (like Mammy: 'She appears in a great many of Bill's books. She it was who was faith- ful; she was the one who endured'). We see young Bill, taciturn, canny, droll, making a steam engine (which explodes), tinkering with an old Confederate pistol (which also explodes), pulling more than his share of sly pranks and already showing himself to be an arresting yarn-spinner if it would help him to avoid work.

His later life is covered more rapidly—the estrangement from his childhood sweetheart, Estelle (who latex did become his wife), his flying and commission in the RFC, his almost dandyish fad for neatness, his accurate golf, and various odd jobs. He was a popular scoutmaster before a minister preached him out of the post on account of his drinking; he was a keen farmer for a while, though he didn't do much of the actual work. Yet these all seem to be glimpses of an unusually quiet and immobile man, per- haps an unknowable one—pottering about his house doing odd jobs, never reading reviews or letters, barely ever travelling (except to Cali- fornia to make money), seldom expressing him- self on anything or conversing with people, stubborn and 'one of the most independent men I have ever known.' Of course, old John himself was clearly a dour one—capable of wanting to shoot a Negro who taxes his temper, hostile to the unions, and very disapproving when perverse brother Bill spoke out in favour of all that inte- grationist rot. When he tries to generalise about his brother he is rather banal: 'Bill had a very real regard for the past, for our taproots were deep-sunk in it.' But there are some genuinely memorable scenes : Bill sitting for hours at the local dances just watching and drinking in his favourite corner, or Bill seeing some share- croppers' children tormenting an epileptic boy and getting his first hint for the Snopeses. At such moments we can catch glimpses in John's brother of the great William Faulkner that the world reads. But only glimpses. For the rest it is still hard to see how brother Bill achieved what he did achieve. Which is, perhaps, as it should be.

Carlos. Baker's book on Hemingway is de- servedly a standard work and anyone interested in Hemingway will want this third edition, which has an excellent added chapter on the last ten years of Hemingway's' life and an invaluable extension of the checklist of his work. What one tends to forget is the incredible amount of phy- sical injury and pain which Hemingway endured in his Iasi years: what one now wonders is just how much more of his matchlessly careful work remains to be revealed to us. As he said in his Nobel Prize speech (which Baker reprints): 'For a true writer each book should be a new begin- ning where he tries again for something that is beyond attainment. He should always try for something that has never been done or that, others have tried and failed.' Hemingway's last years were silent, but for long stretches they were industrious, and with a writer of his calibre one is reluctant to be without any 'new beginning' he might have attempted, even if it seemed to him a failure.

Yet so much American literature is written from the standpoint of a repudiation of existing society that we are apt to forget how many American novelists have in fact attempted to catch hold of the extraordinary amorphous, fluid and protean society which surrounds them. Not all of them settled by Walden's Pond or lit out for the fron- tier. Mr. Miligate's sensible book reminds us of the presence of a long line of social novels in America. He quotes Van Wyck Brooks, 'business in America is not merely more engaging than elsewhere, it is even perhaps the most engaging activity in American life,' and notes how various novelists from Henry James to James Gould Cozzens have attempted to portray the business- man. James declared himself 'absolutely and irredeemably helpless' before the American businessman, yet he felt that he would provide a subject of great interest.

Other writers also found it difficult properly to come to grips with the man of business and the society he was creating. Howells tried, but his populist heart did not enable him to grasp the 'essential economic and social facts.' Norris, transposing Zola's L'Argent into an American context as The Pit, gets to grips with more realities but over-romanticises them. Dreiser can carry more of American crude society than most novelists but he turns his big businessmen into mythic figurei without fully understanding them. Edith Wharton (in The Custom of the Country) 'represents society both accurately and power- fully' with Jamesian subtlety but greater know- ledge of certain areas of life, while Scott Fitzgerald's achievement is perhaps the most extraordinary in that 'he created a novel of manners out of the material offered by a society in a state of extreme flux.' Mr. Mitigate writes very well on these two writers, and he has sound chapters on Sinclair Lewis, Sherwood Anderson, Dos Passos, as well as the other writers I have mentioned. He also points out that 'only since the end of the Second World War has it really been possible to speak of bureaucracy and institu- tionalism both as permeating features of American life and as recurrent themes of American social novels' and be devotes two chapters to institutions in fiction. This book is an intelligent and balanced addition to our under- standing of American literature.