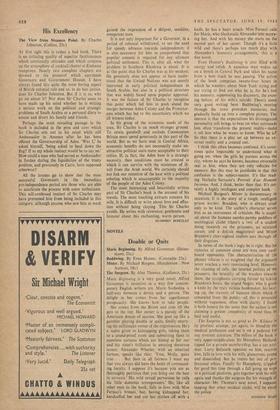 The View from Steamco Point. By Charles Johnston. (Collins, 25s.)

AT first sight this is rather a bad book. There is an irritating quality of superior facetiousness which continually obtrudes and which conjures up the atmosphere of cocktail chatter at Embassy receptions. Nearly two complete chapters are devoted to the protocol which surrounds Governors and Government Houses. I have always found this quite the most boring aspect of British colonial rule and so, to do him justice, does Sir Charles Johnston. But if it is so, why go on about it? Nor does Sir Charles seem to have made up his mind whether he is writing a serious work on the political and strategic problems of South Arabia or a personal diary to amuse and divert his family and friends.

Perhaps the most revealing passage in the book is included in the pros and cons which Sir Charles sets out in his mind while still Ambassador in Amman after he has been offered the Governorship of Aden. 'Was I,' he asked himself, 'being asked to haul down the flag? If so my whole instinct would be to say no.' How could a man who had served as Ambassador in Jordan during the liquidation of the treaty position, and previously in Cairo, have supposed otherwise?

All the lessons go to show that the most successful Governors in the immediate pre-independence period are those who are able to accelerate the process with some enthusiasm. This self-confessed instinct of Sir Charles may have prevented him from being included in this category, although anyone who saw him at work gained the impression of a diligent, sensitive, competent man.

It is not only important for a Governor, in a period of colonial withdrawal, to see the need for speedy advance towards independence; it is also necessary for him to comprehend that popular consent is required for any ultimate political settlement. This is, after all, what the problem in Southern Rhodesia is about. It is at this point that Sir Charles was at his weakest. He genuinely does not appear to have under- stood that the United Nations was not merely interested in early political independence in South Arabia, but also in a political structure that was widely based upon popular approval. It was the failure of Sir Charles to recognise this point which led him to push ahead the merger between Aden Colony and the Protector- ates which has led to the uncertainty which we all witness today.

In his grasp of the economic needs of the area, Sit Charles is on much stronger ground. To retain goodwill and exclude Communism Britain must spend generously in this part of the world. But as we have seen in Central Africa, economic benefits do not necessarily make un- attractive political units more acceptable to their critics. If, in fact, the Aden base is a strategic necessity, then conditions must be created in which it can survive with the minimum of ill- will from the Arab world. We certainly should not link our retention of the base with a political solution which is unacceptable to the majority of the people of the Aden Colony.

The most interesting and beautifully written part of Sir Charles's book is the account of his travels. The most touching extracts concern his wife. It is difficult to write about love and affec- tion without being cloying. This Sir Charles avoids. He writes with reverence, gentleness and humour about this enchanting, warm person.