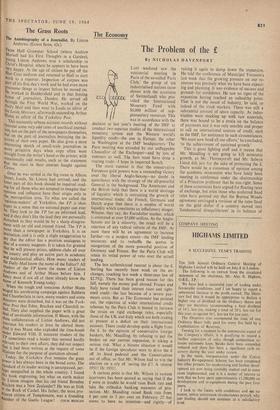 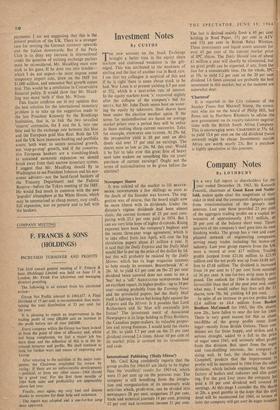 The Problem of the

The main • rumour is that the conservative European gold powers won a resounding victory over the liberal Anglo-Saxons—no doubt in accordance with the strategy of the all-powerful General in the background. The Americans and the British hold that there is a world, shortage of liquidity which is restraining the growth of international trade; the French, Germans and Dutch argue that there is a surplus of world liquidity which constitutes an inflationary danger. Witness, they say, the Eurodollar market, which is estimated at over $5,000 million. As the Anglo- Saxons are in -a minority, the result will be a rejection of any radical reform of the IMF. At most there will be an agreement to increase further—to a modest extent—the IMF lending resources and to reshuffle the quotas in recognition of the more powerful position of Germany and France. But the Paris Club will retain its veiled power of veto over the actual lending.

The less authenticated rumour is about the £. Sterling has recently been weak on the ex- changes, touching last week a three-year low of $2.791a. There has been good reason for this fall, namely the money pull abroad. France and Italy have raised their interest rates and tight- ened credit—the last because of a severe pay- ments crisis. But as The Economist has pointed out, the rejection of wider international credit schemes by the Paris Club is bound to increase the strain on rigid exchange rates, especially those of the UK and Italy which are both trading at present at a deficit on their international account. There could develop quite a flight from the £. In the opinion of conservative foreign bankers, Mr. Maudling, by refusing to put the brakes on our current expansion, is taking a serious risk. What a bizarre situation it would be if the foreign speculator were to drive the £ off its fixed pedestal and the Conservatives out of office, so that Mr. Wilson had to win the election on a cry of 'saving the £'1 A reverse 1951! Or 1931!

A curious point is that Mr. Wilson in various interviews has been quoted as saying that if the £ were in trouble he would raise Bank rate and take the orthodox banking measures of pro. tection. Mr. Maudling raised Bank rate from 4 per cent to 5 per cent on February 27 but seems to have no intention—and rightly—of raising it again to damp down the expansion. He told the conference of Municipal. Treasurers last week that the growing pressure on our re- sources was precisely what we have been expect- ing and planning. It was evidence of success and grounds for confidence. He saw no signs of the expansion having reached an unhealthy point. That is not the mood of industry, he said, or indeed of the stock markets. There was still a substantial amount of spare capacity. As indus- trialists were stocking up with raw materials, there was bound to be a strain on the balance of payments and it was only sensible and proper to call on international sources of credit, such as the IMF, for assistance in such circumstances. `We must now bend all our efforts,' he concluded, `to the achievement of sustained growth.'

This is good fighting stuff and it means that Mr. Maudling is not going to kill economic growth, as Mr. Thorneycroft and Mr. Selwyn Lloyd did, just for the sake of protecting the £. There would be a consensus of opinion among the academic economists who have lately been meeting in conference under the chairmanship of a Princeton professor that he was right. Some of these economists have argued for floating rates of exchange, but even those who preferred fixed rates have pointed out that the Bretton Woods agreement envisaged a revision of the rates fixed on the gold dollar if a country moved into `fundamental disequilibrium' in its balance of

payments. I am not suggesting that this is the present position of the UK. There is a stronger case for revising the German currency upwards and the Italian downwards. But if the Paris Club is to deny any increase in international credit the question of existing exchange parities must be reconsidered. Mr. Maudling must now stick to his guns. If he does run into trouble- which I do not expect-he must impose some temporary import cuts, draw on the IMF for $1,000 million, and announce that growth comes first. This would be a revolution in Conservative financial policy. It would show that Mr. Maud- ling was more 'with it' than Mr. Wilson.

This fracas confirms me in my opinion that the best solution for the international monetary problem is to take up the suggestion made to the late President Kennedy by the Brookings Institution, that is, to link the two so-called 'reserve' currencies, the $ and the £, into one bloc and let the exchange rate between this bloc and the European gold bloc float. Both the US and the UK have immense banking and portfolio assets; both want to secure sustained growth, not 'stop-go-stop' growth, and if the conserva- tive European bankers are a stumbling-block to sustained economic expansion we should break away from their narrow monetary system.

suggest that Mr. Maudling should fly to Washington to see President Johnson and his eco- nomic advisers-not the hard-faced bankers of the Treasury Department and the Federal Reserve-before the Tokyo meeting of the IMF. He would find much in common with the new 'populist' atmosphere at the White House, which may be summarised as cheap money, easy credit, full expansion, war on poverty and to hell with the bankers.