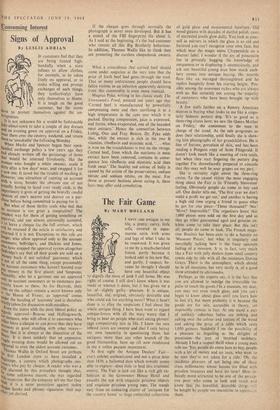 IF customers feel that they are being treated high- handedly when a store refuses to allow clothes, for example, to be taken freely on approval, or to

IN make willing and prompt exchanges of such things, they (collectively) have only themselves to blame. It is tough on the good

customer, but the stores have to protect themselves against the un- scrupulous.

• It is not unknown for a would-be fashionable

lady-about-town to take a couple of day dresses and an evening gown on approval on a Friday, wear them over the country weekend, and return them as 'unsuitable' the following Monday. When Marks and Spencer began their open- handed exchange policy a few years ago they had already written off the percentage of items that Would be returned frivolously, like the Woman who bought a white sweater, made it dirty after a few days' wear, and swapped it for a new one. It saved her the trouble of washing it. However,, one attraction of running an account with a store, besides the obvious one of not actually having to hand over ready cash, is the °Pportunity it gives of getting the brutally candid °Pinion of one's nearest and dearest on a pur- chase before being committed to paying for it. But what of those thrifty souls who feel that an account is too great a temptation? The simplest way for them of getting something on l'IProval, and one almost universally accepted, IS to leave a cheque for the full amount, which Will be retained if the article is satisfactory and returned if it is not. Exceptions to this rule are Jaeger, who allow approval only to the account easterners; Selfridge's, and Dickins and Jones, Who have stopped the approval system altogether (Selfridge's say that all their goods are sold on a .money back if not satisfied' guarantee, which is not at all the same thing, except presumably t/r account customers who haven't handed over 4,1 ,?Y money in the first place); and Simpsons, gccadilly, who let a garment out on approval °till' to account customers or to customers per- sonally know to them. As for Harrods, their rules on the subject remain a secret known only "t3 the House of Fraser, as 'approval' comes sunder the heading of 'accounts' and is therefore tr ,IctlY taboo for discussion with outsiders.

1c.vn the stores with the most liberal policy as fegards (3 approval—Bourne and Hollingsworth, ,1‘ instance, who will allow it to customers who either leave a cheque or can prove that they have accounts in good standing with other stores- Bthat it is always at the discretion of the FlYer. It is most unlikely that an expensive, agile evening dress woold be allowed out on a' rtroval to even the oldest account customer. I, 'bonus Wallis in Oxford Street are perhaps 11;e first London store to have installed a roegiscope, a camera which photographs cus- iit,n,lers who pay by cheque. A reader who was a alarmed by this procedure thought that, wu,r some unknown reason, she was regarded 1111,111 suspicion. But the company tell me that they 0,11.11( it is a surer protection against stolen ogv_eque books and phoney signatures than any Eter yet devised.

If the cheque goes through normally the photograph is never even developed. But it has a smack of the FBI fingerprint file about it. As I said at the beginning, it's the bad customer who creates all this Big Brotherly behaviour. In addition, Thomas Wallis like to think they are protecting the careless chequebook owners.

What a coincidence that corned beef should come under suspicion at the very time that the price of fresh beef had gone. through the roof. *That so many unfortunate people should have fallen victims to an infection apparently deriving from this commodity is even more ironical.

Magnus Pyke, writing in his classic study The Townsman's Food, pointed out years ago that `Corned beef is manufactured by powerfully compressing meat and then sterilising it at a high temperature in the cans into which it is packed. During compression, juice is expressed, and forms, when evaporated, one of the branded meat extracts.' Hence the connection between • Liebig, Oxo and Fray Bentos. Dr.. Pyke adds that, while the extract is rich in the two B vitamins, riboflavin and nicotinic acid, '. .. what is won on the. roundabouts is lost on the swings. Corned beef, from which the nutrients in meat extract have been removed, contains in conse- quence less riboflavin and nicotinic acid than fresh meat.' The healthy red colour of bully is caused by the action of the preservatives, sodium nitrate and sodium nitrite, on the meat. For those at present hesitant about eating it, these facts may qffer cold consolation.