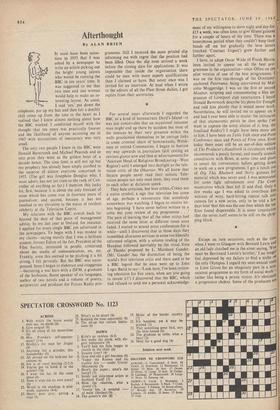 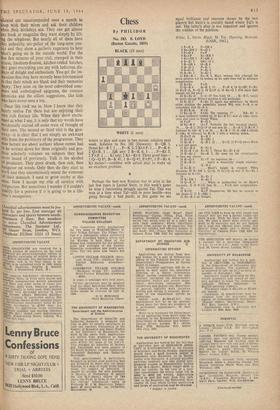 By ALAN BRIEN The only two people I knew in the BBC were Donald. Baverstock and Michael Peacock and so into print they went as the golden boys of a decade hence. The time limit is still not up but my prophecy has already been amply justified to the surprise of almost everyone concerned in 1955. (The girl was Josephine Douglas who, I must admit, has not yet risen to the rank of Con- troller of anything so far.) I mention this lucky hit, first, because it is about the only forecast of mine which has come true in fourteen years of journalism; and second, because it has not resulted in my elevation to the status of resident celebrity at the Television Centre.

My relations with the BBC stretch back far beyond the date of that piece of management advice. In my last year at Oxford, for instance, 1 applied for every single BBC job advertised in the newspapers. To begin with I was modest in my claims-saying merely that I was a brilliant student, former Editor of the his, President of the Film Society, interested in people, concerned about the media of communication, etc. etc. Frankly, even this seemed to be pitching it a bit strong, I felt privately. But the BBC was unim- pressed. Soon I began to elaborate and exaggerate -becoming a war hero with a DFM, a graduate of the Sorbonne, fluent speaker of six languages, author of two novels and a volume of poetry, scriptwriter and producer for Forces Radio pro-

grammes. Still I received the same printed slip informing me with regret that the position had been filled. Once the slip even arrived a week before the closing date for applications. It was impossible that inside the organisation there could be men with more superb qualifications than I claimed to• have. But never once was I invited for an interview. At least when I wrote to the editors of all the Fleet Street dailies, I got replies from their secretaries.

For several years afterwards I regarded the BBC as a kind of bureaucratic Devil's Island-it was just conceivable that an occasional innocent man might end up there by accident but most of the inmates by their very presence within the walls proclaimed themselves to be corrupt links in some criminal chain of homosexuals, Welsh- men or retired Communists. I began to burrow my way upwards in journalism (still casting an envious glance now and then at advertisements for 'Assistant Head of Religious Broadcasting-West Region') until I emerged into daylight as the tele- vision critic of the Observer. We all know that theatre people never read their notices. Tele- vision people not only read them, they read them to each other at dictation speed.

They hate criticism, but love critics.. Critics are a status symbol, a sign that television has come of age, perhaps a reassurance that somebody somewhere was watching. I began to receive let- ters beginning have never before written to a critic but your review of my programme . . The pain of learning that all the other critics had received the Same letter at different times soon faded. I started to attend press conferences for a while-until I discovered that in those days they resembled afternoon services in some too liberally reformed religion, with a solemn reading of the Handout followed inevitably by the ritual Vote of Thanks proposed by L. Marsland Gander. (Mr. Gander . has the distinction of being the world's first television critic and there used to be- a BBC legend that he once went up to John Logie Baird to say-'Look here, I've been review- ing television for five years, when are you going to invent it?') I discovered that the BBC, which had refused to send me a personal acknowledge-

meat of my willingness to slave night and day for £15 a week, was often keen to give fifteen guineas for a couple of hours of my time. There was a honeymoon period when they couldn't keep their hands off me but gradually the love letters (marked 'Contract Urgent') grew further and further apart.

' I have, to adapt Oscar Wilde of Frank Harris, been invited to appear on all the best pro- grammes in the organisation-once. Often on the pilot version of one of the best programmes. I was on the first run-through of the Dimbleby- anchored Panorama, being interviewed by Mal- colm Muggeridge. I was on the first or second Monitor, scripting and commentating a film im- pression of Liverpool club entertainers. I heard Donald Baverstock describe his plans for Tonight and told him plainly that it would never work. Nevertheless, he still invited me to appear on it and had I ever been able to master the intricacies of that oxymoronic patois he then spoke ('We want to capture the noisy silence of it, boy, the fossilised fluidity') I might have been more use to him. I have been on Table Talk once and Press Conference once and Points of View once. Even today. there must still be an out-of-date edition of The Producer's Handbook in circulation which recommends a purely formal, and usually unpaid, consultation with Brien, at some time and place to unsuit his convenience, before getting down to work on a new programme. I got a lunch out of Dig This Rhubarb and thirty guineas for material which was never used. I was summoned for some light refreshment over The Com- municators which then fell ill and died. Only 3 few. weeks ago I was asked to contribute five minutes of witty, hard-hitting topical talk into camera for a new series, only to be told a few days later that this was the one item which the top floor found dispensable. It is some consolation that the series itself seems to be still on the chop- ping block.

Except on rare occasions, such as the dine when I went to Glasgow with Bernard Levin and an old lady clutched me in the street saying, Ton must be Berrrnard Leevin's brother,' I no longer feel depressed by my failure to find a niche oil the telly Olympus. I regard my semi-annual visits to Lime Grove for an imaginary part in a non- existent programme as my form of social work-- rather like being a prison visitor. It's obviouslY a progressive chokey. Some of the producers are allowed out unaccompanied once a month to sleep with their wives and ask their children when their birthdays are. They can get almost any book or magazine they want simply by lift- ing the telephone. But nearly all of them have that unhealthy stir-pallor of the long-term con- vict and they show a pathetic eagerness to hear What's going on in the outside world. For the first few minutes of your visit, cramped in their airless, linoleum-floored, kitchen-tabled hutches, they greet everything you say with ludicrous dis- Plays of delight and enthusiasm. You get the im- Pression that they have recently been lobotomised su that their minds are blank and their memories empty. They seize on the most cobwebbed anec- dotes and anthologised epigrams, the corniest gimmicks and the silliest suggestions, like kids who have never seen a toy.

Once this took me in. Now I know that they barely realise I'm there but are enjoying their own rich fantasy life. When they show excite- ment at what I say, it is only that my words have accidentally started off some train of thought of their own. The second or third visit is the give- aWay-it is clear that I am simply an awkward relic from the prehistory of the programme. They 110W lecture me about authors whose names had 10 be written down for them originally and pro- duce scholarly volumes on subjects they had never heard of previously. Talk is the alcohol of producers. They grow drunk, then sick, then hungover on words. Only then do they start to Work and they unconsciously resent the witnesses Of their debauch. I used to grow tetchy at this once. Now I accept my role of catalyst with resignation. But sometimes I wonder if I couldn't qualify for a pension if it is going to be a life- time's occupation.