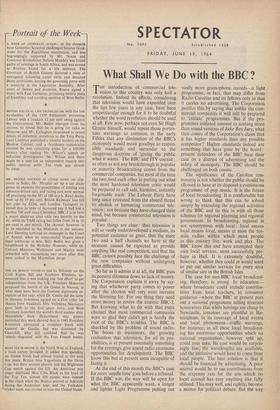 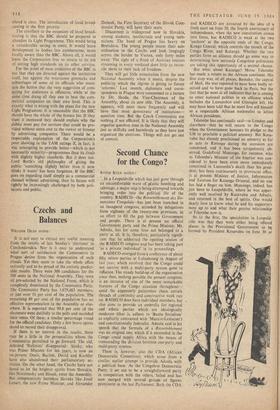 What Shall We Do with the BBC ?

THE introduction of commercial tele- vision to this country was only half a revolution. Indeed its effects, considering that television would have expanded over the last few years in any case, have been unspectacular enough for it to be doubtful whether the word revolution should be used at all. Few now, perhaps not even. Sir Hugh Greene himself, would repeat those porten- tous warnings so common in the early Fifties that any diminution of the BBC's monopoly would mean goodbye to respon- sible standards and surrender to the dangerous doctrine of 'giving the public what it wants.' The BBC and ITV coexist: as often as not any breakthrough in popular or minority broadcasting comes from the commercial companies, but most of the time the two rival each other in putting out what the most hardened television critic would be prepared to call safe, harmless, instantly forgettable trash. The Labour Party have long since retreated from the absurd threat to abolish or hamstring commercial tele- vision : not because they have changed their mind, but because commercial television is popular.

Two things are clear: that television is stilt so vastly underdeveloped a medium, its potential audience so great, that the mere two and a half channels we have at the moment cannot be expected to provide anything like real competition, and that the BBC cannot possibly face the challenge of the new companies without undergoing great difficulties.

So far as it admits it at all, the BBC puts its present dilemma down to lack of money. The Corporation explains it away by say- ing that whichever party comes to power after the election will very soon increase the licensing fee. For one thing they need more money to revive the anaemic BBC-2. But knowing what to do with that extra channel that most commercial companies were so glad they didn't get is hardly the root of the BBC's troubles. The BBC is shackled by the problem of sound radio. The boom in transistors, the growing realisation that television, for all its pos- sibilities, is at present essentially something for the evenings, give sound radio enormous opportunities for development. The BBC know this but at present seem incapable' of facing it.

• At the end of this month the BBC's case for more 'needle time' goes before a tribunal. If the BBC win, the way will be open for what the BBC apparently want, a longer and lighter Light Programme putting out vastly more gramophone records—a light programme, in fact, that may differ from Radio Caroline and its fellows only in that it carries no advertising. The Corporation justifies this by saying that unlike the, com- mercial companies it will still be prepared to 'initiate' programmes. But if the pro- grammes initiated amount to nothing more than sound versions of Juke Box Jury, what then comes of the Corporation's claim that it has higher standards than any possible competitor? Higher standards indeed are something that have gone by the board : present defenders of the BBC base their case on a distrust of advertising and the safety of monopoly. The BBC should be challenged on both counts.

The significance of the Caroline con- troversy is not whether the public should be allowed to have at its disposal a continuous programme of pop music. It is the future of local broadcasting. It is comfortable but wrong to think that this can be solved simply by extending the regional activities of the BBC and tie this in with all those schemes for regional planning and regional government. In broadcasting, regional is not synonymous with local local means local means local, means at most the ten- mile radius within which most people in this country live, work and, play. The BBC know this and have attempted their own local services, most successfully per- haps in Hull. It is extremely doubtful, however, whether they could or would want to put out similar services for every area of similar size in the British Isles.

The case for non-BBC local broadcast- ing, therefore, is strong. In education— where broadcasts could include contribu- tions from local teachers, in consumer guidance—where the BBC at present puts out a national programme telling itinerant housewives that while herrings are cheap in Newcastle, tomatoes are plentiful in Bir- mingham, in its coverage of local events and local phenomena—traffic warnings, for instance; in all these local broadcast- ing has enormous opportunities which no national organisation, however split up, could ever take. Its cost would be surpris- ingly low; the wavelengths are available, and the initiative would have to come from local people. The best solution is that it should be financed by advertising. A poor second would be to use contributions from the sixpenny rate for the arts which no local council has ever anything like fully utilised. This may well, and rightly, become a matter for political debate. But the way

ahead is clear. The introduction of local broad- casting is•the first priority.

The corollary to the extension of local broad- casting is that the BBC should be prepared to abandon its Light Programme. This would bring a considerable saving in costs. It would leave development to bodies less cumbersome, more locally aware than the BBC. Above all, it would leave the Corporation free to return to its job of setting high standards on its other services.

For the point of most criticisms of the BBC is not that they are directed against the institution itself, but against the wearisome gimmicks and subterfuges of some of its officials who main- tain the fiction that the very suggestion of com- peting for audiences is offensive, while at the same time doing all they can to beat the com- mercial companies on their own level. This is exactly what is wrong with the plans for the new Light Programme. It is reasonable that the BBC should have the whole of the licence fee. If they Want it increased they should explain why the public must pay for services that could be pro- vided without extra cost to the viewer or listener by advertising companies. There would be a respectable explanation of the Corporation's poor .showing in the TAM ratings if, in fact, it was attempting to provide better—which is not necessarily minority—programmes than its rivals with slightly higher standards. But it does not. Lord Reith's old philosophy of giving the public 'something slightly better than it now thinks it wants' has been forgotten. If the BBC gbes on regarding itself simply as a commercial channel without advertising, then its future will rightly be increasingly challenged by both poli- ticians and public.