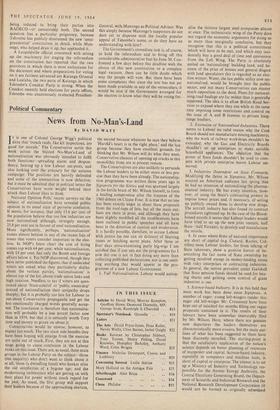 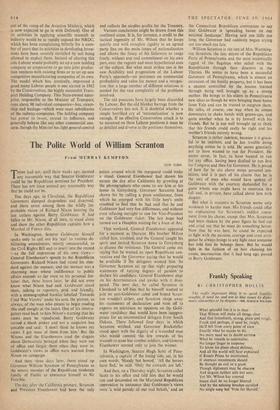 dicta that 'trench raids, like kit inspections, are good for morale.' The Conservative sortie this week across the blasted No-Man's-Land of nationalisation was obviously intended to fulfil both functions—spreading alarm and despon- dency, beating up a few Labour out-posts, and also looking over the armoury for the autumn campaign. The positions are heavily defended and some of the ammunition is now defective; but it must be admitted that in political terms the Conservatives have more weight behind their attack than Labour likes to think.

National Opinion Polls' recent surveys on the subject of nationalisation have revealed public opinion in its usual state of perverse confusion. It seems; for instance, that only 15.6 per cent of the population believe that too few industries are now nationalised although, strangely enough, 23.8 per cent are in favour of steel nationalisation.. More significantly, perhaps, 'nationalisation' comes almost bottom in any of the recent lists of issues that voters consider important in the elec- tion. In NOP's latest chart the cost of living comes top with 64 per cent; while 'nationalisation, with 14 per cent, has only the Bomb and foreign affairs below it. Yet NOP discovered, though they have never published the figures, that if undecided voters are asked what they particularly dislike about the various parties, 'nationalisation' is almost top of the list, above trade union links and high taxation. Needless to say if voters are ques- tioned about 'State-control' or 'public ownership' instead of nationalisation their antipathy drops sharply; but it is probably too late for Labour to out-shout Conservative propaganda and get the less emotionally charged words generally accep- ted. The conclusion is therefore that nationalisa- tion will probably be a less potent factor now than in 1959, but that it is certainly worth Tory time and money to groan on about it.

Conservatives would be unwise, however, to expect too much. The two main side benefits they have been hoping will emerge from the exercise are quite out of reach. First, they are not at this stage going to cause confusion in the Labour ranks on this issue. There are, as usual, three main groups in the Labour Party on the subject—those (the majority) who don't want to think about it at all; those (a dwindling band) who hanker after the old simplicities of a bygone age; and the modernising technocrats who are getting on with their plans for power without much regard for the past. As usual, the first .group will support their leaders because of the approaching election, the second because whatever he says they believe 'Harold's heart is in the right place,' and the last group because they have excellent grounds for thinking that Mr. Wilson will do what they want. Conservative chances of opening up cracks in this monolithic front are at present remote.

The Conservatives are also unlikely to persuade the Labour leaders to-be either more or less pre- cise than they have been already. The nationalisa- tion programme was written three years ago in Signposts for the Sixties and was spawned largely in the fertile brain of Mr. Wilson himself, to form a healing compromise after the traumas of the 1960 debate on Clause Four. It is true that no one has been exactly eager to shout these proposals from the roof-tops of late, but all the main out- lines are there in print, and although they have been slightly modified all the modifications have been outlined in public speeches and all have been in the direction of caution and moderation. It is hardly possible, therefore, to accuse Labour with justice (as one can on defence) of blurring issues or hatching secret plans. After three or four days cross-examining party big-wigs I am satisfied that if one sets out the programmes (as I now do) one is not in faot doing any more than collecting published declarations, nor is one omit- ting anything that would appear in the pro- gramme of a neW Labour Government.

alise the thirteen largest steel companies almost at once. The technocratic wing of the Party does not regard the economic arguments for doing so as more than marginally conclusive, but they recognise that this is a political commitment which will have to be met, and which may inci- dentally buy a good deal of time and quiescence from the Left Wing. The Party is absolutely united on 'nationalising' building land, and be- cause of the price of houses and general disgust with land speculators this is regarded as an elec- tion winner. Water, the last public utility now un- nationalised, would be brought into the public sector, and not many Conservatives can muster much opposition to the deed. Plans for national- ising road haulage are far milder than is generally supposed. The idea is to allow British Road Ser- vices to expand where they can while at the same time imposing some restrictions and control on the issue of A and B licences to private long- range hauliers.

2. Extension of Nationalised Industries. There seems to Labour no valid reason why the Coal Board should not manufacture mining machinery; why the work of railway workshops shouldn't be extended; why the Gas and Electricity Boards shouldn't set up enterprises to make suitable household• appliances. The objection that the power of State funds shouldn't be used to com- pete with private enterprise leaves Labour un- moved.

3. Industries Dependent on State Contracts. Modifying the threat in Signposts, Mr. Wilson assured an American audience last spring that he had no intention of nationalising the pharma- ceutical industry. He has every intention, how- ever, of using the State's contracting powers to impose lower prices and, if necessary, of setting up publicly owned firms to develop new drugs. The aircraft industry has also found its contract procedures tightened up. In the case of the Blood- hound missile it seems that Labour leaders would have tried to set up the new joint venture, half State—half Ferranti, to develop and manufacture the missile.

4. In cases where firms of national importance are short of, capital (e.g. Cunard, Rootes, Col- villes) most Labour leaders, far from talking of State takeovers, show a positive horror of be- smirching the fair name of State ownership by getting involved except in money-lending terms with risky enterprises or contracting industries. In general, the notion prevalent under Gaitskell that State pension funds should be used for buy- ing shares and gaining some control of giant industries is out.

5. Science-based Industry. It is in this field that most work has been done since Signposts. A number of eager,• young left-wingers (under that eager old left-winger Mr. Crossman) have been kept out of mischief for months filling out vague proposals contained in it. The results of their labours have been somewhat inscrutably filed by Mr. Wilson. Here, where there are genuine new departures the leaders themselves are characteristically more evasive, but the main out- lines of what has been suggested to them have been discreetly unveiled. The starting-point is that the satisfactory application of the nation's science depends on better planning of resources of manpower and capital. Science-based industry, especially in computors and machine tools, is short of capital or enterprise. The answer is to set up a Ministry of Industry and Technology res- ponsible for the Atomic Energy Authority, the Central Electricity Generating Board, the Depart- ment of Scientific and Industrial Research and the National Research Development Corporation (it would not be formed as originally advertised out of the rump of the Aviation Ministry, which is now expected to go in with Defence). One of its activities in applying scientific research to industry would be to rapidly expand the NRDC, which has been complaining bitterly for a num- ber of years that its activities in developing inven- tions have been severely curtailed by not being allowed to exploit them. Instead of altering this rule Labour would probably set up a new holding company or corporation to go into joint produc- tion ventures with existing firms or to set up new competitive manufacturing companies of its own. The model which has, ironically, impressed a good many Labour people is one started in 1962 by the Conservatives, the highly successful Trans- port Holding Company. This State-owned enter- prise, responsible to the Minister of Transport, runs about 90 individual companies—bus, steam- ship and haulage—which were once subsidiaries of the railway. companies. The holding company has power to invest, extend its influence, and generally behave like any other commercial con- cern, though the Minister has light general control

and collects the surplus profits for the Treasury.

Various conclusions might be drawn from this confused scene. It is, for instance, a credit to the tactical ingenuity of Mr. Wilson that he keeps quietly and with complete rigidity to an agreed party line on the main issues of nationalisation and allows the fancy of his followers to range freely, without any real commitment on his own part, over the vaguest and most hypothetical area of the subject. But what most strikes one is the new flexibility and pragmatism of the Labour Party's approach—an insistence on commercial profitability and value for money and a recogni- tion that a large number of different solutions is needed for the vast complexity of the problems involved.

The old panaceas have largely been discarded by Labour. But the old blanket barrage from the Conservatives has not. It is doubtful whether a simple horrified cry of 'nationalisation' is now enough. If an effective Conservative attack is to be mounted on these Labour positions it must be as detailed and diverse as the positions themselves.