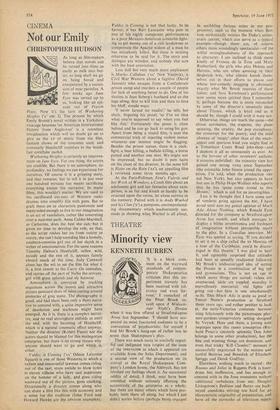 Wuthering Heights is certainly an improve- ment on Jane Eyre. For one thing, the actors are credible. But there is no atmosphere, no profundity, no feelings we can experience for ourselves. Of course it is a gripping story, and that remains; but to tell it in just over one hundred minutes has meant sacrificing everything except the narrative. In many films, this wouldn't matter. We are used to the cardboard cut-outs of Western melo- dramas who simplify life with guns. But to graft these on to characters passionate and many-sided enough to live in our imagination is an act of vandalism, rather like concreting over a national park. Anna Calder-Marshall, as Catherine, does the best she can,- but is given no time to develop the role, so that, as the script rushes her on from outcry to outcry, she can't help sounding like a homely, southern-counties girl out of her depth in a welter of emotionalism. For the same reasons Timothy Dalton's Heathcliff, sullen, wild, moody and the rest of it, appears faintly absurd much of the time. Judy Cornwell alone has the wit to see the film for what it is, a first cousin to the Carry On comedies, and carries off the part of Nellie the servant- girl with great aplomb and sly humour.

Atmosphere is conveyed by tracking sequences across the moors and attractive picture postcard shots of mists curling around pinnacles of grey stone. The photography is good, and hid there been only a short narra- tive to contend with, a quite impressive sense of desolation and starkness might have emerged. As it is, there is a complex narrat- ive, and no real atmosphere enfolds us until the end, with the haunting of Heathcliff, which is a natural cinematic effect anyway. Neither the director (Robert Fuest) nor the actors should be blamed for this misbegotten enterprise, but there is no strong reason why anyone should want to go and watch it, either.

Valdez is Coming ('AA' Odeon Leicester Square) is one of those Westerns. in which a

valiant and resourceful lawman comes riding out of the east, stops awhile to blow holes in eleven villains who have cast aspersions on the honour of a lady, and goes riding westward out of the picture, guns smoking. Occasionally a director comes along who can shoot a film like this with economy and a sense for the tradition (John Ford and Howard Hawks are the obvious examples).

Valdez is Coming is not that lucky. In its favour, it has Burt Lancaster who puts in one of his highly competent performances as a poor Mexican-American constable fight. ing to get money out of a rich landowner to compensate the Apache widow of a mac he has mistakenly killed. But there is nothing otherwise to be said for it. The story and dialogue are wooden, and nobody else acts with the least conviction.

Less dull but very much more unpleasant is Macho Callahan ('AA' New Victoria), a Civil War Western about a fugitive (David Janssen) who escapes from a Confederate prison camp and murders a couple of people for lack of anything better to do. One of his Victims is Jean Seberg's husband and so she tags along, first to kill him and then to love his bluff, simple ways.

'I never lamed no readin',' he tells her shyly, fingering his pistol, 'so I've no idea what you're supposed to say when you feel like this.' Fortunately the posse is close behind and he can go back to using his gun. Apart from being a stupid film, it uses the commercial trick of injecting violent scenes whenever our interest might be flagging. Besides the prison scenes, there is a cock- fight, a bear killing, a buffalo killing, a horse gutted and another one shot. We might not be impressed, but no doubt it puts hairs on the chest of the director. In the same bill is Rider on the Rain ('AA'), an appalling film I reviewed some three months ago.

At the Paris-Pullman, Jires's Valerie and her Week of Wonders, a Czech film about an adolescent girl and her fantasies about vam- pirism, is so fey and kitsch as hardly to be retained upon the retina, let alone survive in the memory. Paired with it is Andy Warhol and his Clan ('x') a pompous, uncomprehend- ing documentary which inadvertently suc- ceeds in showing what Warhol is all about.