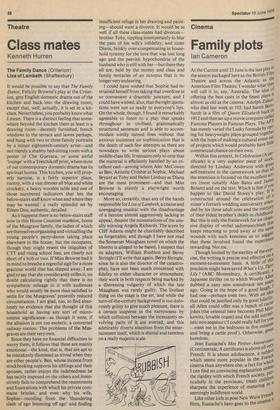 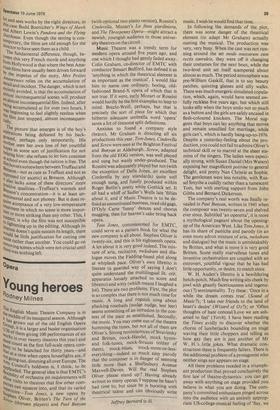 Ian Cameron At the Curzon until 23 June is the last plaY in the season packaged here as the British Olin Theatre and across the Atlantic as the American Film Theatre. I wonder what the will call it in, say, Australia. The idea of offering the best casts in the finest plays is almost as old as the cinema: Adolph Zukor, who died last week at 103, had Sarah Bern' hardt in a film of Queen Elizabeth back irl 1912 and then set up a movie companY called Famous Players in Famous Plays. The AFT has merely varied the Lasky formula by oPl" ing for heavyweight plays grouped together with the hope of making a cultural event out of projects which would probably have little commercial chance on their own.

Within this context, In Celebration (A Or' tificate) is a very superior piece of work. directed by Lindsay Anderson with gren,t, self-restraint in the camerawork so that a" the attention is focused on the excellent act' ors (most notably Alan Bates and Jarnes Bolam) and on the text. Which is fine if happen to like David Storey's play. If IS constructed around the celebration °f 3 miner's fortieth wedding anniversary attellded by his three adult sons and the memorY of their eldest brother's death in childhood' But this is only the framework for an obses; sive display of verbal sadomasochism Bin keeps returning to prod away at the sarnet wounds with such keenness as to stages that those involved found the experience rewarding. Not me. Though limited by the sterility of theexercise, the writing is precise and effective on! moment-to-moment basis. A little of precision might have saved What's Up,Tige„r Lily? (ABC Bloomsbury, A certificate), ° Japanese thriller on to which Woody dubbed a zany new soundtrack ten Yenrsi ago. Going in the hope of a good laugh, had one—perhaps even two. With an idea that could be justified only by great hilarit,Yi all Allen could offer was a bunch of rac13 jokes (the oriental hero becomes Phil M°s: kowitz, lovable rogue) and the odd surrear: istic non sequitur CI could really fall for Y°us —meet me in the bedroom in five mirInte„t and bring a cattle prod'). Otherwise, Bre° boredom. Jean Eustache's Mes Petites Amoureuses (Continentale, A certificate) is above all velict French. It is about adolescence, a sub-° 1.1 which seems more popular in the French cinema than anywhere else, a fact for vilhicss I can find no convincing explanation unle,, the rigidity with which French society, Pa'n ticularly in the provinces, treats childrea sharpens the experience of maturing in seemingly indifferent world.

lel and sees works by the right directors, in this case Budd Boetticher's Wings of Hawk and Albert Lewin's Pandora and the Flying Dutchman. Even though the setting is conteMPorary, the films are old enough for the director to have seen them as a child. The fundamental difference, though, betrween this very French movie and anything r,em Hollywood is that where the best Amer,lean films have usually been driven forward uy the impetus of the story, Mes Petites 4ruoureuses relies on the accumulation of detail and incident. The danger, which is not entirely avoided, is that the accumulation of afinest inconsequential scenes will produce :almost inconsequential film. Indeed, after Ing accumulated at for over two hours, I Wthas beginning to feel slightly restless when e film just stopped, almost inconsequentially.

T,he picture that emerges is of the boy's

asPiratio being defeated by his back

rrilother uses her own loss of her youthful knepes as some sort of justification for not llelPing him : she refuses to let him continue afiti school even though the tuition is free. The fl hovers somewhere between Truffaut and re ressoo—not as cute as Truffaut and not as ssed (or ascetic) as Bresson. Although 01 also lacks some of these directors' more g°,.sltive qualities—Truffaut's warmth and 'esson's concentration—it is at least unefitiMental and not phoney. But it does retClrillre acceptance of a very low-temperature t:atMent in which no scene is more impor or more striking than any other. This, I rr:s1).ect, is why the film was not susceptible ;" fightening up in the editing. Although its '‘vaterest doesn't quite sustain its length, there ' 21Ild be little justification for cutting one t7-eene rather than another. You could go on thill'eving scenes which were not crucial until ere Was nothing left.