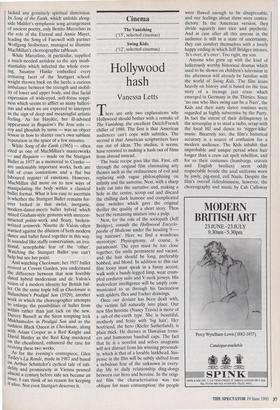 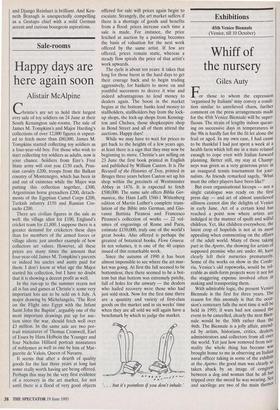 There are only two explanations why Hollywood should bother with a remake of The Vanishing, the excellent Dutch/French chiller of 1988. The first is that American audiences can't cope with subtitles. The second is that American scriptwriters have run out of ideas. The studios, it seems, have resorted to making a hash out of films from abroad instead.

The basic recipe goes like this. First, sift through the original film eliminating arty themes such as the ordinariness of evil and replacing with vague philosophising on infinity and the universe. Next, with a sharp knife cut into the narrative and, making a hole in the centre, scoop out and discard the chilling dark humour and complicated time switches which gave the original thriller the quality of a short story. Then beat the remaining mixture into a pulp.

Next, for the role of the sociopath (Jeff Bridges), consult the Hollywood Encyclo- paedia of Medicine under the heading l- ing nutcases'. Here we find a wondrous stereotype. Physiognomy, of course, is paramount. The eyes must be too close together, the smile permanent and vacant, and the hair should be long, preferably bobbed, and blond. In addition to this our film loony must speak in a funny accent, walk with a bandy-legged limp, wear crum- pled corduroy suits and V-neck jerseys. His malevolent intelligence will be amply com- municated to us through his fascination with spiders, flies and Escher drawings.

Once our deviant has been dealt with, the victims fall naturally into place. Our new film heroine (Nancy Travis) is more of a salt-of-the-earth type. She is beautiful, motherly and feisty with `big hair'. Her boyfriend, the hero (Kiefer Sutherland), is plain thick. He dresses in Hawaiian trous- ers and humorous baseball caps. The fact that he is a novelist and solves anagrams will not distract from his winning personali- ty, which is that of a lovable lunkhead. Sus- pense in the film will be subtly shifted from a nebulous fear of the unknown in every- day life to daily relationship ding-dongs between our hero and heroine. In the origi- nal film the characterisation was too oblique for mass consumption: the people were flawed enough to be disagreeable, and our feelings about them were contra- dictory. In the American version, they divide squarely into nice and psychotic. And in case after all this anyone in the audience is still in a state of uncertainty, they can comfort themselves with a lovely happy ending in which Jeff Bridges intones, `It's over, it's over'. Too right, my son.

Anyone who grew up with the kind of ludicrously worthy historical dramas which used to be shown on children's television in the afternoon will already be familiar with the world of Swing Kids. The film leans heavily on history and is based on the true story of a teenage jazz craze which emerged in Germany in the Thirties. Since `no one who likes swing can be a Nazi', the Kids and their natty dance routines were regarded as highly subversive by the Party. In fact the extent of their delinquency in the screenplay is to steal a radio, scrap with the local HJ and dance to `nigger-kike' music. Bizarrely too, the film's historical accuracy is a source of confusion for a modern audience. The Kids inhabit that improbable and unique period when hair longer than a crew cut spelt rebellion, and for us their costumes (homburgs, cravats and English brollies) seem oddly respectable beside the anal uniforms worn by jowly, pig-eyed, evil Nazis. Despite the film's overall ridiculousness, however, the choreography and music by Cab Calloway

and Django Reinhart is brilliant. And Ken- neth Branagh is unexpectedly compelling as a Gestapo chief with a mild German accent and curious bourgeois aspirations.