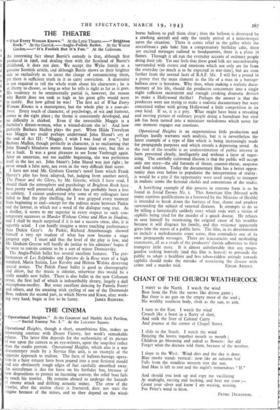 " What Every Woman Knows." At the Lyric Theatre.—" Brighton Rock." At the Garrick.—Anglo-Polish Ballet. At the Winter Garden.—" It's Foolish But It's Fun." At the Coliseum.

AN interesting fact about Barrie's comedy is that, although first produced in 1908, and dealing then with the Scotland of Barrie's childhood, it does not date. We accept the Wylie family as a genuine Scottish article, and although Barrie shows us their brighter side so exclusively as to incur the charge of romanticising them, yet there is sufficient truth in it to carry conviction. A dramatist is not required to tell the whole truth about his characters ; he is at liberty to choose, so long as what he tells is right as far as it goes. His tendency to be sentimentally partial is, however, the reason why Barrie does not rank as high as his great gifts would seem to justify. But how gifted he was! The first act of What Every Woman Knows is a masterpiece, but the whole play is a tour-de- force. Every touch of character, of psychology, of wit and humour, comes in the right place ; the theme is consistently developed, and no difficulty is shirked. Even if the irresistible Maggie is a bachelor's dream-woman, what a wizard-dream she is! And how perfectly Barbara Mullen plays the part. When Hilda Trevelyan was Maggie we could perhaps understand John $hand's cry at the end of Act III: "Maggie, I wish I was fond of you "; but Barbara Mullen, though perfectly in character, is so enchanting that John Shand's blindness seems more fatuous than ever, but this is not a fault. It was a great pleasure to see Irene Vanbrugh again. After an uncertain, not too audible beginning, she was perfection itself in the last act. John Sfluart's John Shand was just right ; he never struck a false note, not even in the very difficult final scene.

I have not read Mr. Graham Greene's novel from which Frank Harvey's play has been adapted, but, judging from another novel, The Power and the Glory, by Mr. Greene, which I have read, I should think the atmosphere and psychology of Brighton Rock have been pretty well preserved, although there has probably been a loss in subtlety. I cannot understand why some of my colleagues have failed to fmd the play thrilling, for I was gripped every moment from beginning to end—except for the tedious scene between Pinkie and the lawyer, in which not a word of the dialogue rang true. As a thriller, it seems to me superior in every respect to such con- temporary successes as Murder Without Crime and Men in Shadow, and I shall be much surprised if it is not a success since, also, it is superbly acted. I can hardly imagine a more touching performance than Dulcie Gray's. As Pinkie, Richard Attenborough showed himself a very apt student of what has now become a stage gangster type. I must add that the level of the play is low, and Mr. Graham Greene will hardly do justice to his admirers' hopes if he were to remain content to be a sort of minor Dostoievsky.

The Anglo-Polish ballet has several excellent features. The per- formances of Les Sylphides and Spectre de la Rose were of a high standard, Maria Sanina, Leo Kersley and Helena Wolska deserving special notice. The Polish Faust ballet is good in choreography and decor, but the music is inferior, otherwise this would be a really notable new ballet. There is also ballet in the new Coliseum revue, the first half of which is indescribably dreary, largely a dull microphone-medley. But some excellent dancing by Pamela Foster and others, and the amazing trick cycling of one of the Dormonde Bros. redeem the second part, in which Nervo and Knox, after work- ing very hard, begin at last to be funny. JAMES REDFERN.