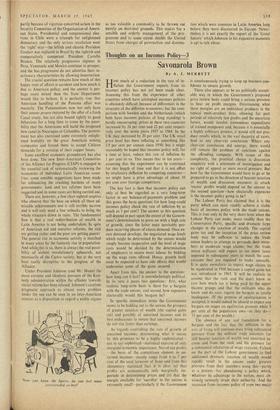 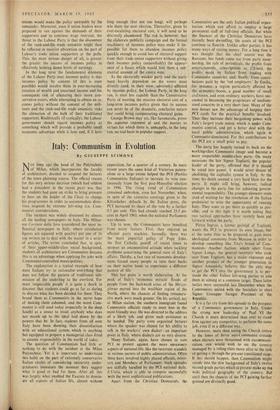 How much of a reduction in the rate of in flation the Government expects from its incomes policy has not yet been made clear. Assessing this from the experience of other countries which have attempted incomes policies is obviously difficult because of differences in the structure of the different economies; but the com- parison with Sweden and the Netherlands (which both have incomes policies of long standing) is hardly encouraging; prices in these two countries increased by 26 per cent and 22 per cent respect- ively over the seven years 1957 to 1964. In the UK they increased by 20 per cent. The UK retail price level has been inflating at something like 3.9 per cent per annum since 1950; but it might reasonably be hoped that incomes policy will, for a time at least, reduce this rate of inflation by 1 per cent or so. This means that in ten years— assuming that the experiment can be continued for this length of time and that it is not offset by retaliatory deflation by competing countries— we might have a price advantage of about 10 per cent over foreign competitors.

The key fact is then that incomes policy can only at best be regarded as a very long-term factor in our balance-of-payments problem and this poses the basic question; for how long could incomes policy check the rate of inflation by as much as 1 per cent? The answer to this question will depend in part upon the extent of the Govern- ment's deterMination to press on with a high rate of growth, since the latter must inevitably pro- duce recurring phases of excess demand. Once ex- cess demand develops, the negotiated wage levels which might be determined by the unions would simply become inoperative and the level of wage costs would be decided by the determination of employers to secure more labour by bidding up the wage rates offered. Hence, growth itself must be expected to have side effects that would undermine some of the gains secured.

Apart from this, the answer to the question: how long can it last? is overwhelmingly political. In its turn it poses two questions: first, what realistic long-term basis is there for a bargain with the trade unions; and second, how expensive electorally would this bargain be?

In specific immediate terms the Government seems to be holding out to the unions the prospect of greater taxation of wealth (the capital gains tax) and possibly of unearned incomes and its best endeavours to ensure that unearned incomes do not rise faster than earnings.

As regards controlling the rate of growth of unearned incomes, determining what is meant by this promises to be a highly sophisticated — not to say sophistical—statistical exercise of only marginal economic importance. Net-of-tax profits

is simultaneously trying to keep up business con- fidence to ensure growth.

There also appears to be no politically accept- able way in which the Government's proposed price review body could bring a serious pressure to bear on profit margins. Determining what these margins are on individual products in the typical multi-product firm, allowing for past periods of relatively low profits and the uncertain future, would involve tremendous expenditure of trained manpower and, because it is essentially a highly arbitrary process, it would still not pro- duce results which, in the vast majority of cases, lead to any clear-cut conclusion. Where any clear-cut conclusion did emerge, there would still remain the problem of sanctions against the offending company. With issues of this complexity, the practical choice is draconian simplicity with a minimum of investigation and no right of appeal or mere moral pressure. But how far the Government would have to go or be prepared to go in the direction of heavier taxation of wealth and draconian measures to attack `excess' profits would depend on the answer to the second question—how electorally expensive is the incomes policy going to be?

The Labour Party has claimed that it is the party which can most readily achieve a viable basis of incomes policy with the trade unions. This is true only in the very short term when the Labour Party can make, more readily than the Conservative Party, specific and dramatic large changes in the taxation of wealth. The capital gains tax and the inception of the price review body may be sufficient to induce the trade union leaders to attempt to persuade their mem- bers to moderate wage claims; but the trade union militants will expect to sec more taxes imposed in subsequent years to match the con- cessions they are required to make annually. It is quite unrealistic to expect wage claims to be moderated in 1968 because a capital gains tax was introduced in 1965. It will be realistic to assume that the rank and file don't know or care how much tax is being paid by the upper income groups and that the militants who do know and do care, regard the bargain as totally inadequate. (If the premise of egalitarianism is accepted, it would indeed be absurd to expect any bargain on wages on egalitarian grounds while 5 per cent of the population own—as they do — 75 per cent of the wealth.) The absence of any real foundation for a bargain and the fact that the inflation in the cost of living will continue must bring substantial pressure from the militant trade unionists for still heavier taxation of wealth and unearned in- come and from the rank and tile pressure for a substantial relaxation of wage restraint. Failure on the part of the Labour government to find additional dramatic taxation of wealth would rapidly result in the unions under greatest pressure from their members using this—partly as a pretext--for abandoning a policy which, whatever its advantage to the nation, must ob- viously seriously strain their authority. And the secession from incomes policy of even two major unions would make the policy untenable by the remainder. Moreover, even if union leaders were prepared to run against the demands of their supporters and to continue wage restraint, the threat to the Labour Party is that the discontent of the rank-and-file trade unionists might then be reflected in massive abstention on the part of Labour's trade union supporters at the polls. This, the most serious danger of all, is greater the greater the success of incomes policy in effectively holding down levels of earnings.

In the long term the fundamental dilemma of the Labour Party over incomes policy is that incomes policy by consent (if this is even possible) would involve them in ever-increasing taxation of wealth and unearned income and the consequent risk of alienating their more con- servative voters, while attempting to obtain an in- comes policy without the consent of the mili- tants and the rank-and-file trade unionists, risks the alienation of the bulk of their traditional supporters. Realistically (if cynically), the Labour government should regard incomes policy as something which will provide a probably small economic advantage while it lasts and, if it lasts long enough (but not too long), will perhaps win them the next election. Thereafter, given its ever-escalating electoral cost, it will need to be discreetly abandoned. The risk is, however, that the elaborate publicity campaign and the formal machinery of incomes policy may make it im- possible for them to abandon incomes policy quickly enough to avoid loss of electoral support from their trade union supporters without giving their incomes policy (unjustifiably) the appear- ance of a fiasco which would lose them a sub- stantial amount of the centre vote.

As the electorally weaker party and the party most heavily dependent on the voters most directly (and, in their view, adversely) affected by incomes policy, the Labour Party, in the long run, is even less capable than the Conservative Party of meeting the massive electoral cost of a long-term incomes policy given that its success can never be of the dramatic, conclusive nature that could bring compensating electoral gains.

George Brown may yet, like Savonarola, prove the supreme exponent of and the martyr to virtues for which there is, unhappily, in the long run, no real basis in popular support.