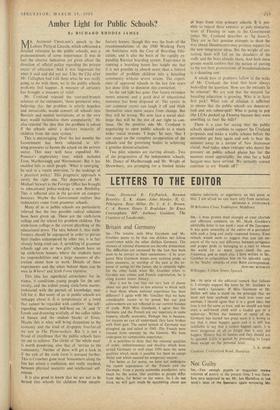 SIR.—The trouble with Miss Gainham and Mr. Goulden seems to be that one dislikes her fellow countrymen while the other dislikes Germans. The chances of rational discussion are thereby diminished. The difficulties are increased by the fact that both seem to be correct in their contentions: if by arro- gance Miss Gainham means cosy national pride, at times excessive, or worship of the past at the ex- pense of acting for the future, she is certainly right. On the other hand, when Mr. Goulden refers to German war crimes and French capitulation, he is citing known recent history.

May it not be true that our very lack of shame about our past makes us. less anxious to break with it than those whose national experience has been different? I agree with Mr. Goulden that we have considerable reason to he proud, but our past achievements are not reflected in our current balance of trade. With Miss Gainham, 1 agree that the Germans and the French are our superiors in some respects, chiefly economic. Perhaps this is because, for reasons we can all understand, they have broken with their past. The social system of Germany was ploughed up and salted in 1945. The French were rescued from anarchy by the General. We have undergone no comparable experience.

It is pointless to deny that the national qualities of order, industriousness and docility which have served Germany so well since 1950 were the same qualities which made it possible for them to accept Hitler and which assured his temporary success.

For better or for worse, we have not undergone the recent experiences of the French and the Germans: from a purely economic standpoint, very much for the worse. Our qualities as people differ from theirs, for better or for worse. So 1 do not think we will gain much by squabbling about our

relative inferiority or superiority on this point or that. I am afraid we can learn only' from ourselves.