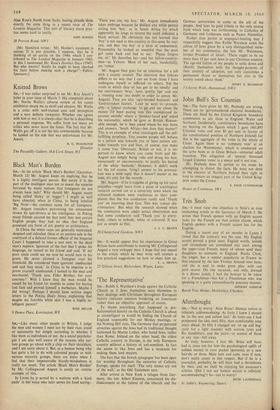 SIR,—Rabbi S. Warshaw's tirade against the Catholic Church as if Jews themselves were blameless in their dealings with Christians throughout European history indicates emotion bordering on fanaticism rather than an objective appraisal of events.'

• To blame everything that happened in pre- Reformation history on the Catholic Church is about as unintelligent as would be finding the Church of England responsible for our Mosley meetings, or the Notting Hill riots. The Germany that perpetrated atrocities against the Jews had its traditional thought fashioned by Martin Luther, who hated Jews, rather than Rome. Ireland on the other hand, the oldest Catholic country in Europe, is the only European country without a history of anti-semitism. In fact she seems to like Jews and has a weakness for making them lord mayors.

The fact that the Jewish synagogue has been open for worship throughout the centuries of Catholic Europe, speaks for itself. 'The very stones cry out of the wall,' as the Old Testament says.

After arrival in New York a refugee from Ger- many, the late Albert Einstein, announced his dis- illusionment at the failure of the liberals and the German universities to come to the aid of his people. And later he paid tribute to the only source from which help was forthcoming, to Catholics of Germany and Lutherans such as Pastor Niern011er.

Rather than persist in scapegoat-hunting may I respectfully suggest that Rabbi Warshaw notes the advice td' Jews given by a very distinguished mem- ber of his community, the late Mr. Weizmann, former President of Israel: 'There ought to be no more than 10 per cent Jews in any Christian country. The age-old failure of my people to settle down and identify themselves with the thought-patterns of their country of adoption, not only constitutes a permanent threat to themselves but also to the society round about them.'