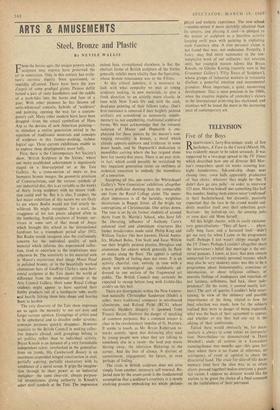 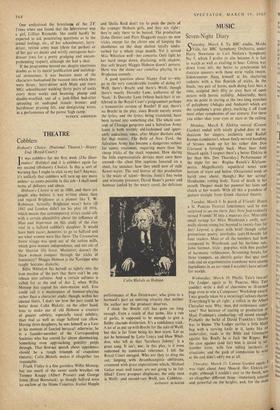 TELEVISION Five of the Boys

RERIFFUSION'S forty-five-minute study of five bachelors, A Face in the Crowd (March 10), was evidently meant to be taken seriously. It was supported by a two-page spread in the TV Times which described how one of director Bill Mor- ton's researchers spent six weeks scouring late- night launderettes, fish-and-chip shops near closing time, town halls apparently productive of 'lost clerks,' whatever they might be—but 'I didn't dare go into pubs'—in order to interview 125 men. Morton-himself met something like half this number, finding them almost never`confirmed' in their bachelorhood, but dreamily, passively expectant that the face in the crowd would sud- denly manifest itself over their substitute grati- fications: the hotted-up car, the evening judo or even dear old Mum herself.

All this bright chatter, with its cosily exclama- tory generalisations --'They all have . . . physi- cally long faces and a harassed look'—didn't get me very far when I came to the programme itself. Perhaps I just wasn't chirpy enough for the 7'V Times. Perhaps I couldn't altogether share the interviewer's belief that marriage is the uni- versal panacea. I knew, at least, that men remain unmarried for extremely personal reasons, which may also be very shadowy ones; was this to be a programme about homosexuality, conscious or unconscious, or about religious celibacy, or neurotic feelings of inadequacy and rejection, or just laziness, selfishness, bad luck, sheer inde- pendence? (In the event, it seemed mostly lazi- ness.) The sort of queries I couldn't help enter- taining, in view of the intimacy and possible impertinence of the thing, related to how the final selection was made, how far the subjects realised they were in danger of being exploited. what was the basis of their agreement to appear, and whether or not they had any say in the editing of their confessions.

Edited these would obviously be, for docu- mentary is always to some extent an interpreta-' tion. Nevertheless —as demonstrated in Denis Mitchell's study of artistes in a Lancashire

rooming-house two months ago—this goes far- thest where there is no frame of reference, no

astringency of event or opinion to check the

directorial hand. The craze for slice-of-life docu- mentary (and here the slice was, as so often,

slivers pressed together) makes everyone a poten- tial victim. I suppose no director would like his victims to be given the choice of a final comment on the truthfulness of their portrayal.

One understood the breeziness of the TV, Times when one found that the interviewer was a girl, Gillian Reynolds. She could hardly be expected to ask penetrating questions as to the sexual feelings, etc., of her schoolmaster, lorry- driver, retired army man (three for pathos) or of her gay art dealer and wittily outrageous hair- dresser (two for a pretty grudging and uncom- prehending respect), although she had a shot.

If the programme moved me, despite enormous doubts as to its moral justification and sociologi- cal seriousness, it was because most of the characters humanised the vacuum into which they were thrust : lorry-driver with Mum and ivory MG; schoolmaster washing thirty pairs of socks every three weeks and beaming, plump and double-woollied, out of a junk-filled bed-sitter sprouting an undraped female bronze; and hairdresser praising life, and denigrating wives, in a performance of the purest 'high camp.'