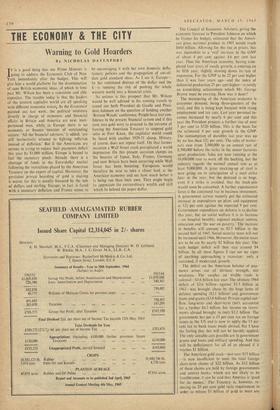 Iis a good thing that our Prime Minister is 'going to address the Economic Club of New York immediately after the budget. This will give him a world platform for the dissemination of sane British economic ideas, of which in time past Mr. Wilson has been a consistent and able expositor. The trouble today is that the leaders of the western capitalist world are all speaking with different economic voices, As the Economist pointed out last week, the political ministers directly in charge of economic and financial affairs in Britain and America are new, inex- perienced men, while in Europe there is no economic or finance minister of outstanding stature. 'All the financial advisers,' it added, 'are still instinctively attuned to fighting inflation instead of deflation.' But if the Americans are serious in trying to reduce their payments deficit' this year by $1,000 million, Europe is bound to feel the monetary pinch. Already there is a shortage of funds in the Euro-dollar market following the restrictions placed by the American Treasury on the export of capital. Moreover, the persistent private hoarding of gold is making it worse, for this is usually financed by the sale of dollars and sterling. Europe, in fact, is faced with a monetary deflation and France seems to

be encouraging it with her own domestic defla- tionary policies and the propagation of out-of- date gold standard ideas. As 1. see it, Europe— by her continued distrust of the dollar and the £ --is running the risk of pushing the whole western world into a financial crisis.

So serious is this prospect that Mr. Wilson would be well advised in his coming travels to sound out both President de Gaulle and Presi- dent Johnson on the question of holding another 'Bretton Woods' conference. People have lost con- fidence in the present financial system and if this rush into gold were to proceed to the extreme of forcing the American Treasury to suspend gold sales at Fort Knox, the capitalist world could be faced with another 1929-31 slump. History, of course, does not repeat itself. On that former occasion a Wall Street crash precipitated a world depression. On this present occasion slumps on the bourses of Japan, Italy, France, Germany and now Britain have been occurring while Wall Street has been booming. Europeans would therefore be wise to take a closer look at the American economy and see how much better it is being run than their own. They might begin to appreciate the extraordinary wealth and skill which lie behind the paper dollar.

The Council of Economic Advisers, giving the economic forecast to President Johnson on which he frames his budget, estimated that the Ameri- can gross national product in 1965 would reach $660 billion. Allowing for the rise in prices, this was equivalent to a 'real' increase in the GNP of about 4 per cent against 4.6 per cent last year. Thus the American economy, having com- pleted four years of steady growth, is entering on its fifth year, slightly slowing down its rate of expansion. For the GNP to be 22 per cent higher than it was four years ago—and the index of industrial production 25 per cent higher—is surely an astonishing achievement which Mr. George Brown must be envying. How was it done?

The mainspring of the American economy is consumer demand, being three-quarters of the total, and this is being kept buoyant with rising employment and tax cuts. Last year personal in- comes increased by nearly 6 per cent and this year the President projects a further rise of over 5 per cent to $520 billion. This is the basis for the estimated 4 per cent growth in the GNP. The consumption of durables last year was up by no less than 121 per cent. The sales of motor- cars rose from 7,500,000 to an annual rate of 8,500,000 before the strike in the motor factories upset production. Sales are now running at the 10,000,000 rate to work off the backlog, but the industry regards the normal annual rate as at least 9,000,000. A great stocking-up of steel is now going on in anticipation of a steel strike later in the year. but the demand is so huge, even if a strike is avoided, that the stock-pile would soon be consumed. A further expansionist force is the continued rise in business investment. A government survey recently put the estimated increase in expenditure on plant and equipment at 121 per cent against the expected 9 per cent. Government expenditure on defence is to decline this year, but on social welfare it is to increase —on hospital benefits, regional medical centres, education and 'the war on poverty.' The increase in benefits will amount to $1.5 billion in the second half of 1965. Social security taxes will not be increased until 1966. Moreover, the excise taxes are to be cut by nearly $2 billion this year. The cash budget deficit will thus stay around $4 billion. In all these figures I can see no signs of anything approaching a recession : only a sustained, if moderated, growth.

The deficit on the American balance of pay- ments arises out of intrinsic strength, not weakness. The surplus on visible trade i$ colossal—$3.6 billion last year. The ultimate 1964 deficit of $2.6 billion --against $3.3 billion in 1963—was brought about by the huge items of defence spending ($2.1 billion) and government loans and grants ($3.8 billion). Private capital out- flow. long-term and short-term (net), accounted for a further $4.3 billion, but income on invest- ments abroad brought in (net) $3.2 billion. The

government has put a 15 per cent tax on foreign issues in the US and is now to apply the 15 per cent tax to bank loans made abroad, but I have the feeling that this will not be harshly applied.

The only sizeable cuts possible are in government grants and loans and military spending. And this will be deflationary for all of us abroad if it reaches $1 billion.

short-term claims of $22 billion. As $12 billion of these claims are held by foreign governments and central banks, which are not likely to be troublesome, it can be said that America is 'good for its money.' The Treasury is, however, re- ducing its 25 per cent gold ratio requirement in order to release $5 billion of gold to meet any

restiveness on the part of, the $10 billion outside depositors. But what is the point of rushing into gold and staging a run on the American 'bank,' unless you want to wreck the entire financial system of the West? President de Gaulle and the gold hoarders (who are on the increase, as Samuel Montagu's Bulletin points out) should have serious second thoughts. They run the risk of starting another world recession.