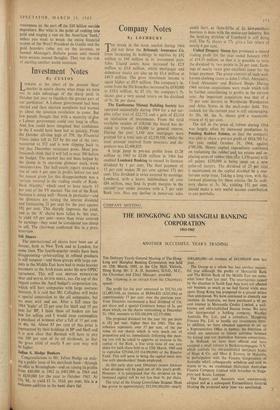 By LOTHBURY TlIE break in the stock market during 1964 did not deter the Britannic Assurance Co. from increasing its holdings in equities by £4.1- million to £44 million in its investment port- folio. Liquid assets have increased by £2.9 million to £3.8 million, whilst mortgages and debenture stocks are also up by £3.4 million at £49.3 million. The gross investment income is again higher at £9.9 million. The company's in- come from the life branches increased by £930,000 to £18.6 million. At £5 15s. the company's 5s. shares give a very sound return on the dividend of 5s. 5d. per share.

A large jump in pre-tax profits from £1.28 million in 1963 to £2.08 million in 1964 has enabled Lombard Banking to exceed its forecast dividend by 1 per cent. The final payment of 15 per cent makes 20 per cent against 17+ per cent. This dividend is twice covered by earnings. Lombard, with a heavy indebtedness of over £84 million, may find its profit margins in the current year under pressure with a 7 per cent Bank rate. Also any decline in motor-car sales

could hurt, as three-fifths of its hire-purchase business is done with the motor-car industry. But the banking division of Lombard is still doing well. The 5s. shares at I 7s. give-a fair return of nearly 6 per cent.

United Drapery Stores has produced a record trading profit for the year ended January 1965 of £14.33 million, so that it is possible to raise the dividend by two points to 26 per cent. Earn- ings of nearly twice give excellent cover for the larger payment. The group consists of such well- known clothing stores as John Collier, Alexandre, Claud Alexander and Richard Shops. During 1964 various acquisitions were made which will be further contributing to profits in the current year. An important acquisition was that of a 75 per cent interest in Worldwide Warehouses and Atlas Stores in the mail-order field. The outlook for the current year is still encouraging. At 28s. 9d. the 5s. shares give a reasonable return of 44 per cent.

The fall in the price of rubber during 1964 was largely offset by increased production by Pataling Rubber Estates, so that the company was able to show a pre-tax profit of £816,700 for the year ended October 31, 1964, against £789,106. Heavy capital expenditure continued on replanting the rubber and tea estates and re- placing acres of rubber (this year 1,370 acres) with oil palms; £550,000 is being spent on a new palm-oil factory. The dividend of 25 per cent is maintained on the capital doubled by a one- for-one scrip issue. Taking a long view, with the forward planning for these estates, the 2s. ordi- nary shares at 3s. 3d., yielding 15+ per cent, should make a very useful income contribution to any portfolio.