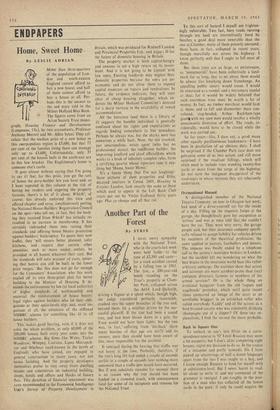 * The figures come from an

Acton Society Trust mono- graph, Housing Finance and Development (Longmans, 15s.), by two accountants, Professor Anthony Merrett and Mr. Allen Sykes. They cal- culate that the median price of a new house in this overpopulous region is £3,680, but that 77 per cent of the families living there can manage only up to £3,600. Unfortunately, only 37 per cent of the houses built in the south-east are in this low bracket. The Englishman's home is someone else's castle.

It goes almost without saying (but I'm going to say it) that, for this price, you get the sort of house the jerry-builder lets you have and, as I have repeated in this column at the risk of boring my readers and angering the property tycoons, there's 'a lot of it about. Which?, of course, has already endorsed this view and offered chapter and verse, simultaneously putting the National House-Builders' Registration Council on the spot—who tell me, in fact, that the bash- ing they received from Which? has actually re- resulted in an increase in membership. It has certainly railroaded them into raising their standards and offering house buyers protection against builders' bankruptcy. To quote their new leaflet, they 'will ensure better planned, safer kitchens, and require that certain other amenities, such as more socket outlets, be provided in all homes whatever their cost. But the standards will take account of costs, ensur- ing that homes can still be built in the lower price ranges.' But this does not go far enough for the Consumers' Association, who this week mailed off its own three-point plan for better building to the Minister of Housing. It de- mands the enforcement by law (or local authority) of higher standards of workmanship and material; the reinforcement of house buyers' legal rights against builders who let their obli- gations or their spirit-levels slip; and, most im- portant of all, the extension of the stiffened NHBRC scheme (or' something like it) to all house builders.

This makes good hearing, even f t does not solve the whole problem, as only 60,000 of the 200,000 houses built every year come into the NHBRC scheme. Big firms like Wates, Taylor Woodrow, Wimpey, Costains, Lanes Metropoli- tan and Whelmar (well-known in the north of England), who have joined, are engaged in general construction in many cases, not just house building. And the property developers themselves prefer to stay away from dwelling houses and concentrate on industrial building, shops, hotels and offices and blocks of luxury flats. This direction of financial investment was even recommended in the Economist Intelligence Unit's Survey of Property Development in Britain, which was produced for Rodwell London and Provincial Properties Ltd., and augurs ill for the future of domestic housing in Britain.

The property market is both capital-hungry and anxious to see a high return on its invest- iiient. And it is not going to be content with low rents, Existing landlords may neglect- their domestic properties because the rents are un- economic and do not allow them to expend capital resources on repairs and renovations. In future, the evidence indicates, they will steer clear of cheap housing altogether, which en- dorses the Milner Holland Committee's demand for a sharp increase in the availability of rented accommodation.

All the literature (and there is a library of it) suggests the humble individual is generally confused about his rights and expectations as regards finding somewhere to live nowadays. Perhaps he always was, but the sharks were less numerous a while back. Now, the not crooked, just unscrupulous, estate agent (who has no professional status), the indifferent builder, the improving landlord and aloof officialdom, which works to a book of infinitely complex rules, form a terrifying quartet whose signature tune is any- thing but 'Home, Sweet Home.'

It's a funny thing (but I'm not laughing): those pictures of slum properties and filthy, decayed interiors in Cmnd. 2605, Housing in Greater London, look exactly the same as those which used to appear in the Left Book Club tracts put out by Victor Gollancz thirty years ago. Plus ca change and all that rot.