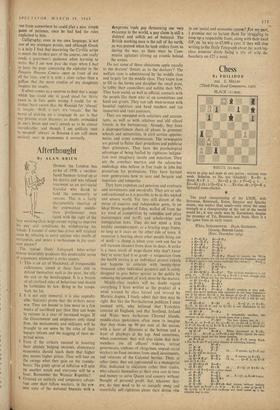 DURING the London bus

strike of 1958, a swollen- faced busman turned up at his dentist and was refused treatment as an anti-social Socialist who dared to hold the community to ransom. This is a fairly characteristic reaction of the overworked middle- class professional man

faced with the sight of the zy working-class wage-earner trying'to improve s pay and conditions by withdrawing his bour. I wonder if sonic bus driver will retaliate on by refusing to carry anyone who smells of tiseptics, and wears a stethoscope in ,his over- at pocket?

The typical Daily Telegraph letter-writer most invariably produces this predictable series arguments whenever a strike occurs.

I. This is an act of blackmail, of irresponsible callousness, aimed at those least able to defend themselves such as the poor, the old,' the sick or the handicapped. It is a breach of all civilised rules of behaviour and should be forbidden by law. Bring in the troops. Sack the lot.

2. It is not only immoral, it is also unprofit- able. Statistics prove that the strikers never win. They are bound to lose more in a few weeks of sacrificed pay than they can hope to recover in a year of increased wages. If the Government and employers only stand firm, the malcontents and militants will be brought to see sense by the cries of their hungry infants and the nagging of their de- prived wives.

3. Even if the strikers succeed in boosting their already bulging incomes, elementary economics should teach them that higher pay means higher prices. They will lose on the swings what they gain on the rounda- bouts. The giddy spiral of inflation will spin up another notch and everyone will be a loser. Remember the Weimar Republic! 4. Granted an unlikely and temporary advan- tage over their fellow workers, in the pre- Sent state of the national finances with a dangerous trade gap threatening our very existence in the world, a pay claim is still a disloyal and selfish act of betrayal. The British working man is the salt of the earth, as was proved when he took orders from us during the war, so there must be Com- munist agitators stirring up trouble behind the scenes.

Do not some of these objections apply equally to the doctors' threats as to the dockers'? The welfare state is administered by the middle class and largely for the middle class. They know how to fill in the forms and decipher the small print, 'to lobby their councillors and nobble their MPs. They have social, as well as official, contacts with the people like them who sit on committees and hand out grants. They can talk man-to-man with hospital registrars and head teachers and tax inspectors and rates assessors.

They arc equipped with solicitors and accoun- tants, as well as with relatives and 'old school friends in the bureaucracy. Already, they have a disproportionate share of places in grammar schools and universities, in civil service appoint- ments and army commissions. The newspapers are geared to flatter their prejudices and publicise their grievances. They have the psychological advantage of being fuelled by righteous indigna- tion over imaginary insults and injustices. They are the armchair martyrs and the saloon-bar underdogs who believe in free trade in jobs but protection for professions. They have learned over generations how to save and bargain and negotiate and temporise.

They have expenses and pensions and contracts and investments and overdrafts. They are as safe and cushioned as it is possible to be in this wicked and unsure world. Yet they still. dream of the status of esquires and independent gents, in an Ideal Home garden of Eden, walled off from the icy wind of competition by subsidies and price maintenance and tariffs and scholarships and immigration laws. They do not mind a little healthy unemployment, or a bracing wage freeze, so long as it stays on the other side of town. A recession is hearing about other people being out of work—a slump is when your own son has to sell vacuum cleaners from door to door. A strike is a mass revolt of wage-slaves who don't know they've never had it so good—a resignation from the health service is an individual protest (which just happens to coincide with twenty-three thousand other individual protests) and is solely designed to give better service to the public by reducing the amount of work done by the doctors.

Middle-class readers will no doubt regard everything I have written, as the product of a mind warped by class hatred and twisted by Marxist dogma. I freely admit that they may be right. But like the Northallerton publican I once roomed with, who believed that Yorkshire covered all England, and that Scotland, Ireland and Wales were barbarous Channel islands, middle-class spokesmen often seem to imagine that they make up 90 per cent of the nation, with a layer of illiterates at the bottom and a layer of playboys at the top. And sometimes, when convenient, they will also claim that their members are all officers' widows, retired governesses, orphans of clergymen, unpaid social workers on fixed incomes from small investments, and veterans of the Colonial Service. Then, at other times, they are represented as a managerial ate, dedicated to vocations rather than trades, who educate themselves at their own cost in time and money to serve Queen and country without thought of personal profit. But, whatever they are, do they need to be so savagely smug and resentfully self-righteous about their divine role in our social and economic system? ,F,or my part, I promise not to lecture them etir struggling to keep up a respectable front, along with their local GP, on :he way to £5,000 a year,if they will stop writing to the Daily Telegraph about the working- class jettnesse doree living a life of wild de- bauchery on £25 a week.