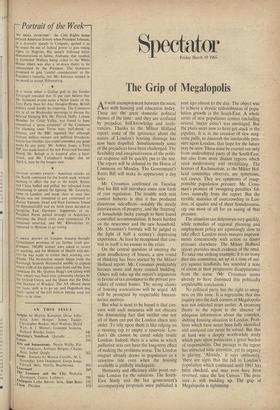 Portrait of the Week A WE SHALL OVERCOME': the Civil Rights

hymn entered American history when President Johnson, in a dramatic speech to Congress, quoted it as lie urged the use of federal power to give voting rights to Negroes: His speech followed bitter demonstrations in Selma, Alabama, that resulted in Governor Wallace being called to the White House (there was also a sit-down there) to be admonished by the President. The Governor promised to give 'careful consideration' to the President's remarks, but Mr. Johnson seemed in no mood to accept filibustering.

.* IN A WEEK when a Gallup poll in the Sunday Telegraph revealed that 51 per cent believe that Mr. Grimond would make a better leader of the Tory Party than Sir Alec Douglas-Home, British Politics could hardly be inspiring. The Commons are to sit on Wednesday mornings to discuss the delayed Hanging Bill. Mr. Patrick Duffy, Labour Member for CoInc Valley, was found to have committed a 'gross contempt' of the Commons for claiming some Tories were 'half-drunk' in debates, and. the BBC reported that although thirteen million viewers saw political broadcasts before last October, few could remember any point madc by any party. Mr. Aubrey Jones, a Tory MP, was made head of the new Prices and Incomes Board, Dr. Balogh is in hospital after a heart attack, and Mr. Callaghan's budget, due on April 6, may be the longest ever.

VIETNAM SEEMED FROZEN: American attacks on the North continued for the fourth week, without seeming to affect the war in the South. Russia and China huffed and puffed, but refrained from threatening to spread the fighting. Mr. Gromyko came to London, and made clear at once that Russia was not interested in any conference to discuss Vietnam. Israel and West Germany linked uP diplomaticallf, and six Arab states decided to recognise East Germany. Supporters of ex- President Peron gained strongly in Argentine's elections. the Dutch crisis over commercial TV remained unsettled, and Mr. Khrushcheir re- appeared in Moscow to go voting..

A SHOCK REPORT on London housing brought Government promises of yet further crash pro- grammes, 100.000 women were asked to return to teaching. and the Minister of Health told doc- tors he was ready to review their working con- ditions. The by-election season began (with the Roxburgh Scottish Nationalist unable to explain where £100 of his deposit came from and the Tory candidate ill). Mr. Quintin Hogg's son (along with four others) was fined over canvassing charges by

the Oxford Union, and the Queen met the Duke and Duchess of Windsor. The AA offered cheap

car loans, milk is to go up, and Dagenham dog track—scene of the £10 million betting coup last Year--is to close.