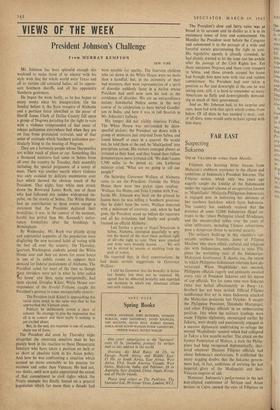 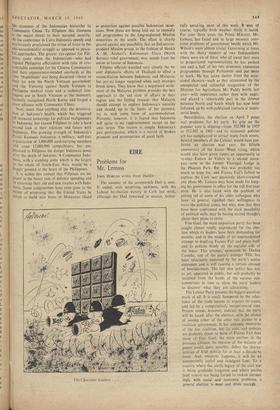 Filipinos are learning bitter lessons from Malaysia's stubborn resistance to the cfiarm and ambitions of Indonesia's President Sukarno. The Filipino nation, which only two years ago eagerly sought the kinship of the Indonesians under the regional scheme of co-operation known as `Maphilindo' (Malaysia-Philippines-Indonesia), is engaged now in bolstering her defences at her southern backdoor which faces Indonesia. The country has suddenly realised that the presence of some 12,000 Indonesian illegal en- trants in the richest Philippine island, Mindanao, and the uncontrolled influx over the years of alien infiltrators, including Chinese subversives, pose a dangerous threat to national security.

The military build-up in this republic's vul- nerable southern frontier, home of Filipino Muslims who share ethnic, cultural and religious ties with Indonesians, underlines to most Fili- pinos the worsening state of the Indonesian- Malaysian konfrontasi. It shows, too, the extent to which Philippine-Indonesian relations have de- teriorated. When `Maphilindo' was mooted, Philippine officials eagerly and anxiously awaited every visit of President Sukarno and his legion of top officials. Yet for some time now Sukarno (who was hailed affectionately as Bung - i.e. brother) has not been invited. Official Filipino indifference first set in when Indonesia attacked the Malaysian peninsula last October. It caught the Philippine President, Diosdado Macapagal, and other Filipino officials' in an embarrassing position. Jdst when the military landings were made Filipino diplomats, encouraged earlier by Jakarta, were deeply and passionately engaged in a massive diplomatic undertaking to salvage the second `Maphilindo' summit which had collapsed in Tokyo a few months earlier. The attack on the former Federation of Malaya, a state the Philip- pines had long recognised diplomatically, shat- tered whatever illusions Filipino officials had about Indonesia's motivations. It confirmed the many nagging doubts that the Sukarno govern- ment had, in fact, ambitions of reviving the lost imperial glory of the Madjapahit and Shri- Visayan empires of old.

Moreover, Indonesia's performance in the last non-aligned conference of African and Asian nations in Cairo opened the eyes of Filipinos to the closeness of the Indonesian hierarchy to is China. To Filipinos this closeness Is the major threat to their national security. At the conference in Cairo Indonesia openly and vociferously proclaimed the virtue of force in the anti-neocolonialist struggle as opposed to peace- ful approaches. The greater eye-opener for Fili- pinos came when the Indonesians—who had regaled Philippine officialdom with tales of irre- concilable contempt for the Chinese Communists and their expansionist-minded overlords at the time `Maphilindo' was being discussed—threw in their lot with the North Vietnam government and the Vietcong against South Vietnam (a Philippine medical team and a technical con- tingent are in South Vietnam at the moment), formally recognised North Korea and forged a close alliance with Communist China.

Now, more than anything else, the deteriora- tion of Sukarno's health, which has triggered 0.1f intensive jockeyings for political realignments in Indonesia, has caused Filipinos to take a hard second look at their relations and future with Indonesia. The growing strength of Indonesia's Partai Komunis Indonesia. a military, well-knit organisation of 3,000.000 card-carrying members and some 12,000,000 sympathisers, has em- phasised to Filipinos the danger Indonesia poses after the death of Sukarno. A Communist Indo- nesia, with a standing army which is the largest In the whole of .South-East Asia, would be a dagger pointed at the heart of the Philippines.

It is 'within this context that Filipinos are en- aged in the heavy task of defence spending and in reviewing their old and new treaties with Indo- nesia. Some congressmen have even gone to the extent of proposing that the United States be asked to build new bases in Mindanao island

as protection against possible Indonesian incur- sions..New plans are being laid out to intensify aid programmes to the long-neglected Muslim minorities in the south. The effort is clearly geared against any possibility that an Indonesian- prodded Muslim group, in the fashion of Sheikh A. M. Azahari's Kalimantan Utara (North Borneo) rebel government. may secede from the union in favour of Indonesia.

Filipino officials watched very closely the re- cent diplomatic efforts of Thailand to effect a reconciliation between Indonesia and Malaysia, but are no longer surprised when such attempts break down. They know that a negotiated settle- ment of the Malaysia problem provides the best approach to the sad state of affairs in their region and the feeling remains that Malaysia should attempt to explore Indonesia's sincerity and should, up to the limits of her patience, try to seek some form of accommodation. Privately, however, it is feared that Indonesia will agree to no rapprochement except on her own terms. The reason is simply Indonesia's past performance, which is a record of broken promises and protestations of good faith.