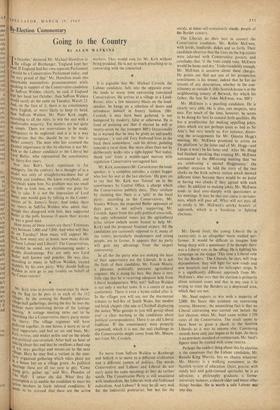 Going to the Country

the village of Birchanger, 'England kept her head. If England had her own separate Parliament it would be a Conservative Parliament today, and I'M very proud of that.' Mr. Hamilton made this remarkable nationalistic pronouncement while Peaking in support of the Conservative candidate for Saffron Walden: clearly, he said, if England kept her head last October, then Saffron Walden would surely do the same on Tuesday. March 23. And, on the face of it, there is no constituency illore English. or more likely to keep its head, than Saffron Walden. Mr. Peter Kirk ought, according to all the rules, to win the seat with a comfortable majority. Yet matters are not quite so simple. There are reservations to be made. ambiguities to be explored; and it is in a way appropriate that this should be so; for this is 'hitter country. The man who has assumed the Greatest importance in this by-election is not Mr. Kirk or the Labour candidate or the Liberal but

for Butler, who represented the constituency 'Or thirty-five years.

Not that Rab's local reputation is for ambiguity. On the contrary, he is thought of as a Qdel not only of straightforwardness but of Warmth and kindness. He knew everybody, and everybody knew him. No problem was too small for him to look into, no trouble too great for "1111 to take. It is not the impression of Lord uotler one would gain by talking to the Constr. Valives of St. James's Street. And today there are voters in Salffon Walden who admit that, though they disagreed with him, they supported Mier at the polls because (1 quote their words) he was a good man. How many of these voters are there? Estimates do between 1,000 and 5,000. And what will they uo on Tuesday? How many will support Mr. Kirk how many stay at home, how many divide . between Labour and Liberal? The Conservatives, It should be noted, are electioneering under a double disadvantage. For not only was Lord outler well known and popular. He was, also, according to many in Saffron Walden, treated Shabbily by his own party. Why should Saffron walden in turn go to any trouble on behalf of the Conservatives'?

Mr. Kirk tries to provide reassurance by show- tng the flag (as he puts it) in each of the 112 villages. In the evening he fluently addresses 1'11148e-hall gatherings; during the day he uses the Perhaps more interesting device of the 'cottage meeting.' A cottage meeting turns out to be ;3,nnlething like a Conservative sherry party minus `ne sherry. The village organiser will have Bathered together . in one house, a score or so of Kirk supporters, and laid on tea and buns. Mr. irk arrives, and makes polite and on the whole th°o-political conversation. After half an hour of ctikirtg about this and that he swallows a final cup i, tea, says goodbye and moves on to the next village. Here he may find .a variant in the simi-

111 a house but on a village green. As political In.meetings these, are all too easy to guy. 'Come along girls, gather up,' said Mrs. Plowden of ' he Hall: I swear she did. What they do !ccomplish is to enable the candidate to meet his setive workers in fairly relaxed conditions. It `'swig to be stressed that these are the active

workers. They would vote for Mr. Kirk without being prodded. He is not so much preaching to as , conversing with the converted.

It is arguable that Mr. Michael Cornish, the Labour candidate, falls into the opposite error. He tends to waste time canvassing convinced Conservatives. He arrives at a village in a Land- Rover; after a few minatory blasts on the loud- speaker, he bangs on a selection of doors and introduces himself in breezy fashion. (Mr. Cornish, it may have been gathered, is not hampered by modesty, false or otherwise. He is fond of pointing out that if elected he will at twenty-seven be the youngest MP.) Occasionally he is warned that he may be given an unfriendly reception: 'a real old Tory firebrand lives in the back there somewhere,' said his driver, pointing towards a rural slum. But more often than not he deliberately walks into a tight-lipped 'Not today, thank you' from a middle-aged matron with regulation Conservative corrugated hair.

M r: Kirk, announces M r. Cornish over the loud- speaker, is 'a complete outsider, a carpet bagger who lost his seat at the last election.' He goes on to say that Mr. Kirk was 'foisted' on to the constituency by Central Office, a charge which the Conservatives publicly. deny. They retaliate by claiming that there is a 'split' in the local party: according to the Conservatives, Mr. Stanley Wilson, the respected Butler opponent of days past, is not actively supporting Mr. Cornish. Apart from this jolly political cross-talk. the only substantial issues are the agricultural price review (which seems bound to help Mr. Kirk) and the proposed Stansted airport. All the candidates are cautiously opposed to it; many of the voters, particularly shopkeepers and young people. are in favour. It appears that no party will gain any advantage from the airport controversy.

In all this the party who are making the least of their opportunity are the Liberals. It is not the fault of their candidate, Mr. Frank Moore, a pleasant, politically innocent agricultural engineer. He is doing his best. But there is very little sign that he is receiving adequate help from Liberal headquarters. Why not? Saffron Walden is not only a market town. It is a centre of non- conformity. There is even a hymn called after it. In the villages you will see, not the marmoreal tributes to hell-fire of South Wales, but modest red brick chapels (the one at Chrishall displaying the notice 'Who gossips to you will gossip about you'—a clear warning to the candidates about political correspondents). There is an old Liberal tradition. If the constituency were properly

organised, which it is not, the real challenge to the Conservatives might come from Mr. Moore. not from Mr. Cornish.

To move from Saffron Walden to Roxburgh and Selkirk is to move to a different civilisation and a different system of politics. The words Conservative and Labour and Liberal do not carry quite the same meanings as they do farther south. The Conservative Party is still associated with landlordism, the Liberals with old-fashioned radicalism. And Labour? It may be all very well for the industrial proletariat, but not for the sturdy, at times self-consciously sturdy, people of the Border country.

The Liberals do their best to connect the Conservative candidate, Mr. Robin McEwen, with lairds, landlords, dukes and so forth. Their candidate observes that the trees on the big estates were adorned with Conservative posters, and concludes that 'if the trees could vote, McEwen would be home and dry.' Understandably enough, Mr. McEwen is sensitive about these charges. He points out that not one of his prospective constituents is his tenant; indeed that he has no tenants of any description, whether in the con- stituency or outside it. (His Scottish house is in the neighbouring county of Berwick, for which his father, the late Sir John McEwen, was MP.)

Mr. McEwen is a puzzling candidate. He is clearly very able. He is also, one suspects, very nice. For much of the time, however, he seems to be doing his best to conceal both qualities. He has a predilection for making appalling jokes, jokes which are not perhaps quite as bad as Sir Alec's, but very nearly so. For instance, discus- sing the arrangements for Mr. Quintin Hogg's meeting, Mr. McEwen promised to arrive on the platform 'at the latter end of Mr. Hogg—and I hope it won't be his latter end.' After Mr. Hogg had finished speaking that evening Mr. McEwen announced to the 800-strong meeting that 'we are celebrating a second Hoggmanay.' On another occasion he told the story of the two clocks on the Irish railway station which showed different times because there would be no point' in having two clocks if they agreed with each other. In addition to making jokes, Mr. McEwen tends to deal over-sharply with questioners at his meetings. It may be that one cause is nervous- ness, which will pass off. What will not pass off so easily is Mr. McEwen's quirky honesty of approach, which is a handicap in fighting elections.

Mr. David Steel, the young Liberal (he is twenty-six), is an altogether more studied per- former. It would be difficult to imagine him being sharp with a questioner if he thought there was a Liberal vote in the offing. He is fighting his campaign on the slogan 'This time a Liberal vote for the Borders.' The Liberals, he says, will stop depopulation; they will fight for new roads and new hospitals and even for helicopter strips. It is a significantly different approach from Mr. McEwen's, who says that the election is primarily about national issues and that in any case it is wrong to treat the Borders as a depressed area, which they are not.

Mr. Steel expects to win with a majority of 2,000. He bases this estimate on canvassing returns. However, the astonishing fact is that no Liberal canvassing was carried out before the last election, when Mr. Steel came within 1,739 votes of the Conservative. The result seems to have been as great a shock to the Scottish Liberals as it was to anyone else. Canvassing records have only just begun to be kept. As there is no previous standard of comparison. Mr. Steel's figures must be treated with some reserve.

Perhaps the saddest thing about this by-election is the consensus that the Labour candidate, Mr. Ronald King Murray, has no chance whatever. Mr. Murray is a walking monument to the Scottish system of education. Quiet, precise, with sandy hair and gold-rimmed spectacles. he is an advocate, a philosophy graduate, a former university lecturer, a church elder and many other things besides. He is worth a safe Labour seat any day.