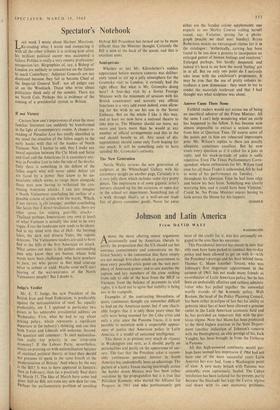 Curious how one's impressions of even the most familiar literature can suddenly be transformed in the light of contemporary events. A chance re- reading of Paradise Lost has totally identified in my mind the situation of the fallen angels in the early books with that of the leaders of North Vietnam. Not, I hasten to add, that 1 make any moral equation between Ho Chi Minh and Satan and God and the Americans (it is customary any- way in Paradise Lost to take the side of the devils). Only there is something in the debate of the fallen angels who will never admit defeat yet are faced by a power they know to be un- assailable which seems to range them alongside those men now having to withstand the con- tinuing American attacks. I can just imagine a North Vietnamese concluding his outline of a Possible course of action with the words. 'Which, if not victory, yet revenge,' another concluding like Satan that if direct retaliation is out, there are other areas for sniping guerrilla attacks Thailand perhaps. Impressions (my own at least) of what Vietnam is actually like tend to be very vague. Even the landscape now tends to be identi- fied in my mind with that of Hell : the burning lakes, the dark and drearie Vales, the regions dolorous. The Vietnamese leaders are said to have fled to the hills at the first American air attack. What comes out most is the pathos surrounding men who know they are beaten, whose bold words have been challenged, who have nowhere toriurn. yet who persist in that mad courage never to submit or yield. Maybe soon well start hearing of the war-weariness of the North Vietnamese people? But I doubt it.