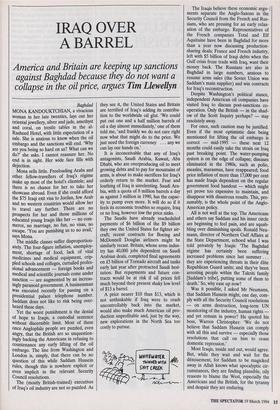 IRAQ OVER A BARREL

Baghdad MONA KANDOUKTCHIAN, a vivacious woman in her late twenties, lays out her oriental jewellery, silver and jade, amethyst and coral, on trestle tables in the al- Rasheed Hotel, with little expectation of a sale. She is anxious to know when the oil embargo and the sanctions will end. 'Why are you being so hard on us? What can we do?' she asks. I cannot reassure her. No end is in sight. Her wide face fills with dejection. Mona sells little. Freeloading Arabs and other fellow-travellers of Iraq's regime make up most of the hotel's clientele; and there is no chance for her to take her showcase abroad. Even if she could afford the $75 Iraqi exit visa to Jordan, few Arab and no western countries would allow her to travel any further. There are no prospects for her and those millions of educated young Iraqis like her — no com- merce, no marriage, no fun, no visas, no escape. 'You are punishing us to no avail,' says Mona.

The middle classes suffer disproportion- ately. The four-figure inflation, unemploy- ment, shortage of food, lack of vital medicines and medical equipment, crip- pled schools and colleges, curtailed profes- sional advancement — foreign books and medical and scientific journals come under sanction — are augmented by an increas- ingly paranoid government. A businessman was executed recently for passing on a presidential palace telephone number. Saddam does not like to risk being over- heard these days. Yet the worst punishment is the denial of hope to Iraqis, a custodial sentence without discernible limit. Most of these once Anglophile people are puzzled, even angry, that the British are so unquestion- ingly backing the Americans in refusing to countenance any early lifting of the oil embargo. The line from Washington and London is, simply, that there can be no question of this while Saddam Hussein rules, though this is nowhere explicit or even implicit in the relevant Security Council resolutions.

The (mostly British-trained) executives of Iraq's oil industry are not so puzzled. As they see it, the United States and Britain are terrified of Iraq's adding its contribu- tion to the worldwide oil glut. 'We could put out one and a half million barrels of oil a day almost immediately,' one of them told me, 'and frarildy we do not care right now what that might do to the price. We just need the foreign currency . . . any we can lay our hands on.'

It is inconceivable that any of Iraq's antagonists, Saudi Arabia, Kuwait, Abu Dhabi, who are overproducing oil to meet growing debts and to pay for mountains of arms, is about to make sacrifices for Iraq's orderly return to the market. Fear and loathing of Iraq is unrelenting. Saudi Ara- bia, with a quota of 8 million barrels a day as against 3 million in 1990, has the capac- ity to pump even more. It will do so if it feels its economic troubles so require, Iraq or no Iraq, however low the price sinks.

The Saudis have already rescheduled payments of $6 billion of the $9 billion they owe the United States for fighter air- craft; recent contracts for Boeing and McDonnell Douglas airliners might be similarly recast. Britain, whose arms indus- try has 40,000 jobs dependent on Saudi Arabian deals, completed final agreements on £5 billion of Tornado aircraft and tanks early last year after protracted Saudi hesi- tation. But repayments and future con- tracts would be at risk if oil prices fell much beyond their present shaky low level of $13 a barrel.

A price nearer $10 than $13, which is not unthinkable if Iraq were to crash uncontrollably back into the market, would also make much American oil pro- duction unprofitable and, just by the way, new explorations in the North Sea too costly to pursue. The Iraqis believe these economic argu- ments separate the Anglo-Saxons in the Security Council from the French and Rus- sians, who are pressing for an early relax- ation of the embargo. Representatives of the French companies Total and Elf Aquitaine have been in Baghdad for more than a year now discussing production- sharing deals; France and French industry, left with $5 billion of Iraqi debts when the Gulf crisis froze trade with Iraq, want their money back. The Russians are also in Baghdad in large numbers, anxious to resume arms sales (the Soviet Union was Saddam's main supplier) and win contracts for Iraq's reconstruction.

Despite Washington's political stance, independent American oil companies have visited Iraq to discuss post-sanctions co- operation. Only the British — in the shad- ow of the Scott Inquiry perhaps? — stay resolutely away.

For once, such caution may be justified. Even if the most optimistic date being mentioned for lifting the oil embargo is correct — mid-1995 — these next 12 months could easily take the strain on Iraq past breaking point. The water-pumping system is on the edge of collapse; diseases eliminated in the 1980s, such as polio, measles, marasmus, have reappeared; food price inflation of more than 17,000 per cent has made Iraqis dependent on the regular government food handout — which might yet prove too expensive to maintain, and disappear with disastrous results. This, pre- sumably, is the whole point of the Anglo- American policy.

All is not well at the top. The Americans and others say Saddam and his inner circle are beginning to feel pain, and are squab- bling over diminishing spoils. Ronald Neu- mann, director of Northern Gulf Affairs at the State Department, echoed what I was told privately by Iraqis: 'The Baghdad regime has certainly been suffering increased problems since last summer . . . they are experiencing threats in their elite Republican Guard units; and they've been arresting people within the Tahiti family [Saddam's tribe], putting some of them to death.' So, why ease up now?

Was it possible, I asked Mr Neumann, that Saddam Hussein might, one day, com- ply with all the Security Council resolutions — on arms destruction, long-term UN monitoring of the industry, human rights and yet remain in power? He quoted his boss, Warren Christopher: 'We do not believe that Saddam Hussein can comply with all this and survive — especially those resolutions that call on him to cease domestic repression.'

Most Iraqis, inside and out, would agree. But, while they wait and wait for the denouement, for Saddam to be magicked away in Allah knows what apocalyptic cir- cumstances, they are finding plausible, oily reasons to blame the West, especially the Americans and the British, for the tyranny and despair they are enduring.