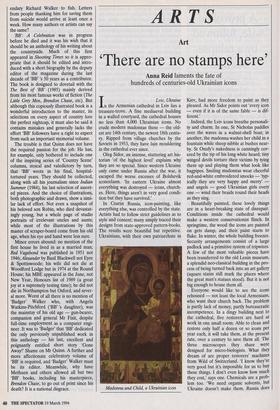 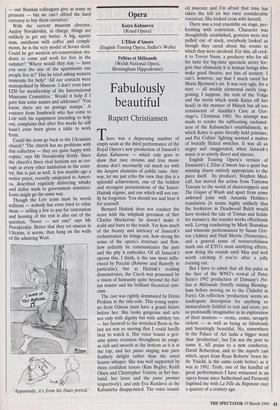 `There are no stamps here

ILviv, Ukraine n the Armenian cathedral in Lviv lies a treasure-trove. A fine mediaeval building in a walled courtyard, the cathedral houses no less than 4,000 Ukrainian icons. No crude modern madonnas these — the old- est are 14th century, the newest 18th centu- ry. Ripped from village churches by the Soviets in 1953, they have lain mouldering in the cathedral ever since.

Oleg Sidor, an intense, stuttering art his- torian 'of the highest level' explains why' they are so special. Since western Ukraine only came under Russia after the war, it escaped the worse excesses of Bolshevik iconoclasm. 'In eastern Ukraine almost everything was destroyed — icons, church- es. Here, things aren't in very good condi- tion but they have survived.'

In Czarist Russia, icon-painting, like everything else, was controlled by the state. Artists had to follow strict guidelines as to style and content; many simply traced their designs from state-approved pattern-books. The results were beautiful but repetitive. Ukrainians, with their own patriarchate in Madonna and Child, a Ukrainian icon Kiev, had more freedom to paint as they pleased. As Mr Sidor points out 'every icon — even if it is of the same fable — is dif- ferent.'

Indeed, the Lviv icons breathe personali- ty and charm. In one, St Nicholas paddles over the waves in a walnut-shell boat; in another, the madonna washes her child in a fountain while sheep nibble at bushes near- by. St Onufy's nakedness is cunningly cov- ered by the tip of his long white heard; tiny winged devils torture their victims by tying them up and playing them what look like bagpipes. Smiling madonnas wear cheerful red-and-white embroidered smocks — 'typ- ically they are very happy and merry' and angels — good Ukrainian girls every one — wind their braids round their heads as they sing.

Beautifully painted, these lovely things are in a heart-breaking state of disrepair. Conditions inside the cathedral would make a western conservationist flinch. In springtime, the wood the icons are painted on gets damp, and their paint starts to flake. In winter, the whole building freezes. Security arrangements consist of a large padlock and a primitive system of tripwires. A few of the most valuable pieces have been transferred to the old Lenin museum, a splendid neo-classical building in the pro- cess of being turned back into an art gallery (square stains still mark the places where the great man's statues stood). But it is not big enough to house them all.

Everyone would like to see the icons rehoused — not least the local Armenians, who want their church back. The problem is partly lack of money, partly bureaucratic incompetence. In a dingy building next to the cathedral, five restorers are hard at work in one small room. Able to clean and restore only half a dozen or so icons per year each, it will take them, at the present rate, over a century to save them all. The three microscopes they share were designed for micro-biologists. What they dream of are proper restorers' machines from Wild of Switzerland. 'I know they're very good but it's impossible for us to buy these things. I don't even know how much they cost,' says one. Chemicals are a prob- lem too. 'We need organic solvents, but Ukraine doesn't make them. Russia does — our Russian colleagues give as some as presents — but we can't afford the hard currency to buy them ourselves.' With the current museum director, Andriy Novakivskiy, in charge, things are unlikely to get any better. A big, square man, assiduous with coffee' and compli- ments, he is the very model of Soviet sloth. Could he get western art-conservation stu- dents to come and work for free in the summer? 'Where would they stay — have you seen the size of the apartments our people live in?' Has he tried asking western museums for help? 'All our contacts were monopolised by Moscow. I don't even have $250 for membership of the International Museums Committee.' Would it help if I gave him some names and addresses? 'You know, there are no postage stamps.' A restorer from Innsbruck who has come to Lviv with his equipment intending to help out, complains that after five weeks he still hasn't even been given a table to work from.

Could the icons go back to the Ukrainian church? 'The church has no problems with this collection — they are quite happy with copies,' says Mr Novakivskiy firmly. Since the church's three rival factions are as cor- rupt as every other institution in the coun- try, this is just as well. A few months ago a senior priest, recently emigrated to Ameri- ca, described regularly delivering whisky and dollar wads to government ministers. Icons might go the same way. Though the Lviv icons must be worth millions — nobody has even tried to value them — selling a few to pay for restoration and housing of the rest is also out of the question. 'Never — not one!' says Mr Novakivskiy. Better that they rot unseen in Ukraine, it seems, than hang on the walls of the admiring West.

`Apparently, it's from his blues period.'