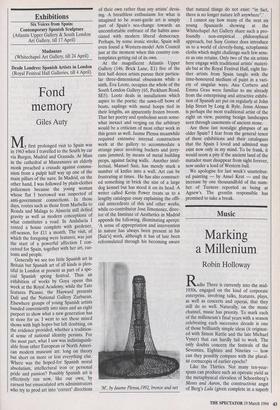 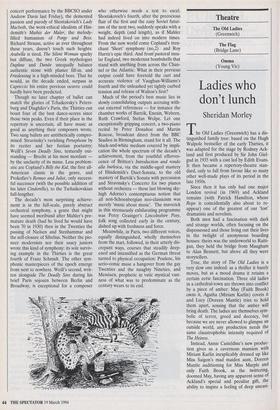 Radio Three is currently into the mid- 1930s, engaged on the kind of corporate enterprise, involving talks, features, plays, as well as concerts and operas, that they still do so well. Naturally, on the music channel, music has priority. To mark each of the milleneum's final years with a season celebrating each successive decade is one of those brilliantly simple ideas (it originat- ed with Simon Rattle and the late Michael Vyner) that can hardly fail to work. The only doubts concern the festivals of the Seventies, Eighties and Nineties — how can they possibly compare with the plural- ist cornucopia of earlier epochs?

Like the Thirties. Not many ten-year- spans can produce such an operatic yield as the metaphysical elevation of Schoenberg's Moses and Aaron, the constructivist angst of Berg's Lulu (given complete in a superb concert performance by the BBCSO under Andrew Davis last Friday), the demented passion and parody of Shostakovich's Lady Macbeth, the work-ethical idealism of Hin- demith's Mathis der Maler, the melody- filled humanism of Porgy and Bess. Richard Strauss, active as ever throughout these years, doesn't touch such heights: Arabella is tired, The Silent Woman sparky but diffuse, the two Greek mythologies Daphne and Dande unequally balance authentic stone with plaster fill-in, and Friedenstag is a high-minded bore. That he would, as the decade ended, surpass in Capriccio his entire previous oeuvre could hardly have been predicted.

Though no later chapter of ballet can match the glories of Tchaikovsky's Peters- burg and Diaghilev's Paris, the Thirties can boast four of the best dance-scores since those twin peaks. Even if their place in the repertory is uncertain, all have music as good as anything their composers wrote. Two sung ballets are antithetically compro- mised: Stravinsky's ravishing Persephone by its reciter and her fustian poetastry; Weill's Seven Deadly Sins, texturally out- standing — Brecht at his most mordant by the unclarity of its mime. Less problem- atic are Copland's Billy the Kid, the first all- American classic in the genre, and Prokofiev's Romeo and Juliet, only success- ful successor (with the possible addition of his later Cinderella), to the Tschaikovskian full-lengther.

The decade's most surprising achieve- ment is in the full-scale, purely abstract orchestral symphony, a genre that might have seemed moribund after Mahler's pre- mature death (had he lived he would have been 70 in 1930) then in the Twenties the passing of Nielsen and Stenhammar and the self-closure of Sibelius. Neither the pio- neer modernists nor their saucy juniors wrote this kind of symphony: its sole surviv- ing example in the Thirties is the great fourth of Franz Schmidt. The other sym- phonic masterpieces of the epoch emerge from next to nowhere. Weill's second, writ- ten alongside The Deadly Sins during his brief Paris sojourn between Berlin and Broadway, is exceptional for a composer who otherwise needs a text to excel. Shostakovich's fourth, after the precocious flair of the first and the zany Soviet futur- ism of the next two, suddenly speaks with a weight, depth (and length), as if Mahler had indeed lived on into modern times. From the new world come Copland's tren- chant 'Short' symphony (no,2) and Roy Harris's epic third. And fronf'pastoral insu- lar England, two modernist bombshells that stand with anything from across the Chan- nel or the Atlantic. What in their previous output could have foretold the curt and accurate violence of Vaughan-Williams's fourth and the unleashed yet tightly curbed tension and release of Walton's first?

Much of the period's best music lies in slowly consolidating outputs accruing with- out external references — for instance the chamber works of Bart61c, Enesin, Webern, Ruth Crawford, Stefan Wolpe. Let one exceptionally gripping concert, a two-piano recital by Peter Donahoe and Martin Roscoe, broadcast direct from the BBC Studios in Birmingham, stand for it all. The black-and-white medium covered by impli- cation the whole spectrum of the decade's achievement, from the youthful efferves- cence of Britten's Introduction and rondo alla burlesca, via the middle-aged mastery of Hindemith's Duet-Sonata, to the old mastery of Bartok's Sonata with percussion and Stravinsky's Concerto for two pianos without orchestra — these last blowing sky- high Adorno's contemptuous notion that all non-Schoenbergian neo-classicism was merely 'music about music'. The maverick in this strenuously exhilarating programme was Percy Grainger's Lincolnshire Posy, folk song collected early in the century, dished up with freshness and force.

Meanwhile, in Paris, two different voices, equally distinguished, wholly themselves from the start, followed, in their utterly dis- crepant ways, courses that steadily deep- ened and intensified as the German threat turned to physical occupation: Poulenc, his serio-comic muse a hangover from the gay Twenties and the naughty Nineties, and Messiaen, prophetic in vatic mystical vast- ness of what was to predominate as the century wears to its end.