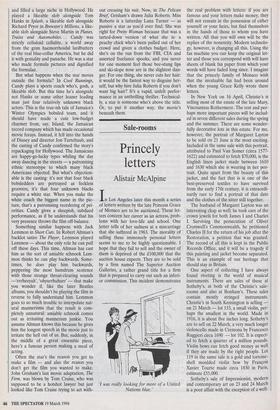 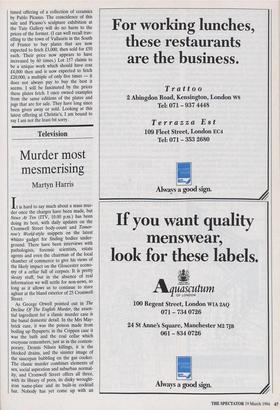 `I was really looking for more of a United Nations blue.' the real problem with letters: if you are famous and your letters make money, they will not remain in the possession of either yourself or your heirs, but find themselves in the hands of those to whom you have written. All that you will own will be the replies of the nonentity. Modern technolo- gy, however, is changing all this. Using the fax machine you can keep the original let- ter and those you correspond with will have sheets of blank fax paper from which your words will have faded long since. I imagine that the princely family of Monaco wish that the invaluable fax had been around when the young Grace Kelly wrote these letters.

In New York on 16 April, Christie's is selling most of the estate of the late Mary, Viscountess Rothermere. The rest and per- haps more important pieces will be includ- ed in seven different sales during the spring and the summer. There are some wonder- fully decorative lots in this estate. For me, however, the portrait of Margaret Layton to be sold on 21 June is the most exciting. Included in the same sale with this portrait, attributed to Paul Van Somer (circa 1577- 1622) and estimated to fetch $70,000, is the English linen jacket made between 1610 and 1630 which she is wearing in her por- trait. Quite apart from the beauty of this jacket, and the fact that is is one of the best-preserved textiles to have survived from the early 17th century, it is extraordi- narily rare to find a portrait of that date and the clothes of the sitter still together.

The husband of Margaret Layton was an interesting chap as well; he took care of the crown jewels for both James I and Charles I. Surviving the persecution of Oliver Cromwell's Commonwealth, he petitioned Charles II for the return of his job after the Restoration, a petition that was granted. The record of all this is kept in the Public Records Office, and it will be a tragedy if this painting and jacket become separated. This is an example of our heritage that should stay in Britain.

One aspect of collecting I have always found riveting is the world of musical instruments. There are sales of these at Sotheby's, at both of the Christie's sale- rooms and also at Bonham's. These sales contain mostly stringed instruments. Christie's in South Kensington is selling on 21 March — lot 153, a small violin, per- haps the smallest in the world. Made in 1916, it is about five inches long. Sotheby's are to sell on 22 March, a very much longer violoncello made in Cremona by Francesco Ruggieri circa 1690 — lot 102. It is expect- ed to fetch a quarter of a million pounds. Violin bows can fetch good money as well if they are made by the right people. Lot 119 in the same sale is a gold and tortoise- shell moulded violin bow by Francois Xavier Tourte made circa 1830 in Paris, estimate £55,000.

Sotheby's sale of Impressionist, modern and contemporary art on 23 and 24 March is a poor affair with the exception of a well- timed offering of a collection of ceramics by Pablo Picasso. The coincidence of this sale and Picasso's sculpture exhibition at the Tate Gallery will do no harm to the prices of the former. (I can well recall trav- elling to the town of Vallauris in the South of France to buy plates that are now expected to fetch £3,000, then sold for £50 each. Their price now appears to have increased by 60 times.) Lot 157 claims to be a unique work which should have cost £4,000 then and is now expected to fetch £20,000, a multiple of only five times — it does not always pay to buy the best it seems. I will be fascinated by the prices these plates fetch. I once owned examples from the same editions of the plates and jugs that are for sale. They have long since been given away or sold. Looking at this latest offering at Christie's, I am bound to say I am not the least bit sorry.