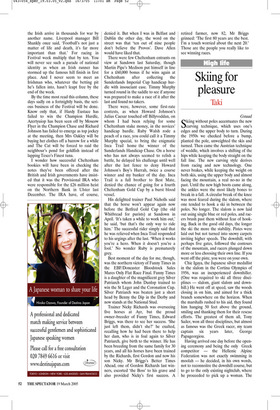 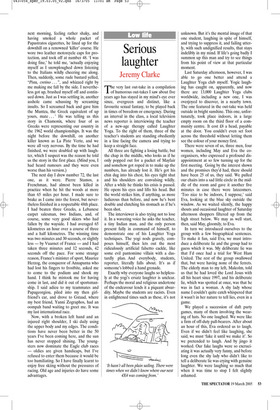 Skiing without poles accentuates the new carving technique, which uses one’s edges and the upper body to turn. During the 1950s we checked before a bump, planted the pole, unweighted the skis and turned. Then came the Austrian technique of weddle, which involves a shifting of the hips while keeping the body straight on the fall line. The new carving style derives from racing and new technology. One never brakes, while keeping the weight on both skis, using the upper body and almost facing the mountain, a real no-no in the past. Until the new high boots came along, the ankles were the most likely bones to break in a fall. A circular break of the knee was most feared during the slalom, where one tended to hook a ski in between the poles. No longer. The slalom is now laid out using single blue or red poles, and racers brush past them without fear of hooking. Back in the good old days, the longer the ski the more the stability. Pistes were laid out but not turned into snowy carpets inviting higher speeds. The downhill, with perhaps five gates, followed the contours of the mountain, and racers plunged down more or less choosing their own line. If you went off the piste, you were on your own.

Chic Igaya, the Japanese silver medallist in the slalom in the Cortina Olympics of 1956, was an inexperienced downhiller. (One was required to ski all three disciplines — slalom, giant slalom and downhill.) He went off at speed, saw the woods closing in on him, and aimed for a thick branch somewhere on the horizon. When the marshalls rushed to his aid, they found him hanging 50 feet above the ground, smiling and thanking them for their rescue efforts. The greatest of them all, Tony Sailer, won all three disciplines, but almost as famous was the Greek racer, my team captain six years later, George Papageorgiou.

Having arrived one day before the opening ceremony and being the only Greek competitor — the Hellenic Alpine Federation was not exactly swimming in moolah — he decided, in his own words, not to reconnoitre the downhill course, but to go to the only existing nightclub, where he proceeded to pick up a woman. The next morning, feeling rather shaky, and having smoked a whole packet of Papastratos cigarettes, he lined up for the downhill on a renowned ‘killer’ course. He wore two leather motorcycle caps for protection, and took off at number 48. ‘I was doing fine,’ he told me, ‘actually enjoying myself as I snowploughed down listening to the Italians wildly cheering me along. Then, suddenly, some rude bastard yelled, “Pista, cretino ... ”, and whizzed right by me making me fall by the side. I nevertheless got up, brushed myself off and continued down. Just as I was settling in, another asshole came schussing by screaming insults. So I screamed back and gave him the Muntza, the Greek equivalent of up yours, mate ... ’ He was telling us this story in Chamonix, where four of us Greeks were representing our country in the 1962 world championships. It was the night before the downhill, on another killer known as La Piste Verte, and we were all very nervous. By the time he had finished, we were doubled up with laughter, which I suspect was the reason he told us the story in the first place. (Mind you, I had heard rumours and they were even worse than his version.) The next day I drew number 72, the last one, as it were. Pierre Stamos, a Frenchman, had almost been killed in practice when he hit the woods at more than 65 miles per hour. I made sure to brake as I came into the forest, but nevertheless finished in a respectable 48th place. I had beaten three Greeks, a Lebanese carpet salesman, two Indians, and, of course, some very good skiers who had fallen by the wayside. I had averaged 65 kilometres an hour over a course of three and a half kilometres. The winning time was two minutes and 30 seconds, or slightly less — by Vuarnet of France — and I had taken three minutes and 12 seconds, 42 seconds off the pace. For some strange reason, France’s minister of sport, Maurice Herzog, the conqueror of Annapurna who had lost his fingers to frostbite, asked me to come to the podium and shook my hand. I think he mistook me for having come in last, and did it out of sportsmanship. I said adieu to my teammates and Papageorgiou, piled into my then girlfriend’s car, and drove to Gstaad, where my best friend, Yanni Zographos, had an oompah band waiting to greet me. It was my last international race.

Now, with a broken left hand and an injured right shoulder, I ski daily using the upper body and my edges. The conditions have never been better in the 50 years I’ve been coming here, and the sun has never stopped shining. The youngsters now dominate the Eagle club races — oldies are given handicaps, but I’ve refused to enter them because it would be too humiliating. So I have finally learnt to enjoy free skiing without the pressures of racing. Old age and injuries do have some advantages.