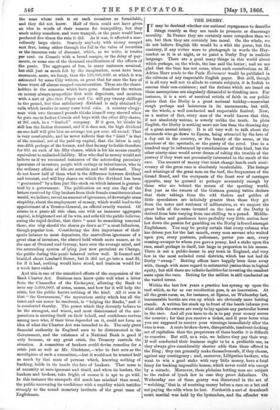 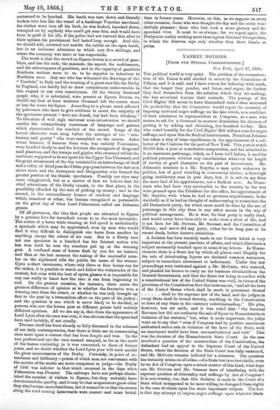 IT may be doubted whether our national repugnance to describe things exactly as they are tends to promote or discourage morality. In France they are certainly more outspoken than we

are, but then they are certainly less moral. On the whole, we do not believe English life would be a whit the purer, but the

contrary, if any writer were to photograph in words the Hay- market as it is at night, or to paint a Derby Day in realistic language. There are a good many things in this world about which perhaps, on the whole, the less said the better ; and we are glad that the time has not come, when such contributions as ES. Adrian Marx sends to the Paris Evenentent would be published in the columns of any respectable English paper. But still, though it is all very well not to allude to certain subjects, it is foolish to assume their non-existence ; and the fictions which are based on these assumptions are singularly distasteful to thinking men. For instance, it is a sort of received artiale of faith in our public prints that the Derby is a great national holiday—somewhat rough perhaps and boisterous in its amusements, but still, on the whole, a well conducted and respectable festival. Now, as a matter of fact, every man of the world knows that this, if not absolutely untrue, is utterly unlike the truth. In plain English, the Derby is nothing more nor less than the drawing day of a great annual lottery. It is all very well to talk about the thousands who go down to Epsom, being attracted by the love of a day out in the country, or the beauty of the scene, or the grandeur of the spectacle, or the gaiety of the revel. One in a hundred may be influenced by considerations of this kind, but .the other ninety-nine would never dream of taking the trouble of the journey if they were not pecuniarily interested in the result of the race. The amount of money that must change hands each anni- versary of the great race is absolutely incalculable. The losings and winnings of the great men on the turf, the frequenters of the Grand Stand, and the occupants of the front row of carriages opposite, may be guessed at perhaps accurately enough by those who are behind the scenes of the sporting world. But just as the owners of the German gaming tables declare that their takings from the odd thalers and gulden of little speculators are infinitely greater than those they get from the notes and rouleaux of millionaires, so we suspect the great bulk of the trams invested on the issue of the Derby is derived from bets varying from one-shilling to a pbund. Middle- c]aw; ladies and gentlemen have probably very little notion how low down the passion for gambling on the Derby is found amongst Englishmen. You may be pretty certain that every cabman who has driven you for the last month, every man servant who waited upon you, every postman, policeman, porter you met, every crossing-sweeper to whom you gave a penny, had a stake upon the race, small perhaps in itself, but large in proportion to his means. There is not a public-house in any town in England, and very few in the moat secluded rural districts, which has not had it Derby "sweep." Betting offices have happily been done away with, though with more regard to substantial justice than to logical equity, but still there are infinite facilities for investing the smallest sums upon the race. Betting for the million is still conducted on the varied terms.

Within the last few years a practice has sprung up upon the turf which, as far as our recollection goes, is an innovation. At all the great races, as, for instance, at Epsom, on Wednesday last, innumerable booths are run up which are obviously mere betting stands. A written list stuck up in front of the booth informs you what odds the owners are ready to lay against any particular horses in the race. And all you have to do is to pay your money across the counter ; for that you receive a ticket, and if your horse wins you are supposed to receive your winnings immediately after the race is won. A more broken-down, disreputable, insolvent-looking set of capitalists than the proprietors of these booths it is difficult to conceive. But still, as a rule, we believe they pay their way. If well conducted their business ought to be a profitable one, as they always give considerably shorter odds than those offered in the Ring; they, can generally make themselves safe, if they choose, against any contingency ; and, moreover, Lilliputian backers, who want to win a good stake with very little money, have a fatal fancy for backing impossible horses, which never could win except by a miracle. Moreover, these plebeian betting men are subject to the rudest of lynch law in case they prove defaulters. On Wednesday one of these gentry was discovered in the act of "welching," that is, of receiving money before a race on a bet and not paying the odds when he lost. Forthwith a sort of drumhead, court martial was held by the bystanders, and the offender was sentenced to be lynched. His booth was torn down and literally broken into bits like the vessel of a bankrupt Venetian merchant, his clothes were torn off his back, he was kicked, knocked down, trampled on by anybody who could get near him, and would have been in peril of his life, if theRolice had not rescued him after in their opinion his punishment had lasted long enough. And this, we should add, occurred not amidst the rabble on the open heath, but in an inclosure admission to which cost five shillings, and where the company was more or less respectable.

The truth is that the crowd on Epsom downs is a crowd of gam- blers, and has the code, the manners, the aspect, the recklessness, and the extravagance of gamblers, and in the capacity of gamblers Southern nations seem to us to be superior in behaviour to Northern ones. Any one who has witnessed the drawings of the

." Tombola" in Italy and the running of a great race like the Derby in England, can hardly fail to draw comparisons unfavourable in

this respect to our own countrymen. Of the twenty thousand people who, it is calculated, were present at Epsom Downs, we should say that at least nineteen thousand left the course more .or less the worse for liquor. According to a phrase much affected by policemen who have to give evidence in court, the majority of the spectators present "were not drunk, but had been drinking."

To this state of well nigh universal semi-intoxication we should .ascribe the extraordinary coarseness of language and gesture which characterized the conduct of the crowd. Songs of the lowest character were sung before the carriages of the " aris-

tocracy and gentry" who were assembled on the course. Jokes whose humour, if humour there was, was entirely Fescenuine,

were bandied freely to and fro between the occupants of drags and mail phaetons, and the tramps and gipsies who swarmed within the 'enclosure supposed to be set apart for the Upper Ten Thousand, and the great amusement of the day consisted in an interchange of chaff and a volley of dried peas fired fitm pop-guns between the fast men -about town and the Anonymas and Marguerites who formed the _greater portion of the female spectators. Possibly our view may .seem exaggerated, but as a matter of fact we believe that the chief attractions of the Derby consist, in the first place, in the possibility afforded by the race of picking up money ; ant in the -second, in the extraordinary licence of conduct and language which, somehow or other, has become recognized as permissible on the great day of what Lord Palmerston called our Lstlunian games.

Of all pretences, the idea that people are attracted to Epsom by a genuine love for horseflesh szeras to U3 the most untenable.

'The action of a horse while running at full speed is undoubtedly .3 spectacle which may be appreciated, even by men who would find it very difficult to distinguish one horse from another by anything except the colour of his coat. But in a Derby race not one spectator in a hundred has the faintest notion who >has won until he sees the numbers put up at the winning Rost. A confused mass of horses flash by you for an instant, .an,d then at the last moment the raising of the successful num- ber on the signboard tells the public the name of the winner.

Upon a short racecourse, where only three or four horses run for the stakes, it is possible to watch and follow the vicissitudes of the --abated, but even with the best of opera glasses it is impossible for any one really to know how the race is run from beginning to

end. On the present occasion, for instance, there exists the greatest difference of opinion as to whether the favourite won a

winning race from the outset, or whether he was only brought up first to the post by a tremendous effort on the part of his jockey ; and the question is one which is sieves likely to be decided, as

persons who saw the horses pass at different points hold entirely .different opinions. AU we can say is, that from the appearance of Lord Lyon after the race was over, it was obvious that the spurs had been used lavishly, if not cruelly.

The race itself has been already so fully discussed in the columns .of our daily contemporaries, that there is little use in commenting.

once more upon a contest that has been fought and won. To the non- professional eye the race seemed unequal, as far as the merit -of the horses contesting in it was concerned, to those of former

years, and we doubt whether the Lord Lyon year will rank amidst

the great anniversaries of the Derby. Certaird,y, in point of at- tendance and brilliancy—points of which men not conversant with the secrets of the stable are more competent to judge—the Derby

of 1866 was inferior to that which occurred in the days when Palmerston was Premier. The railways have not perhaps dimin- ished the number of visitors to Epsom., but they certainly have deteriorated the quality, and it may be that as spectators grow older they also become more fastidious, but it seemed to us that the scenes along the road coming homewards were coarser and more brutal

than in former years. However, on this, as we suppose on every other occasion, those who won thought the day and the scene won- derfully pleasant ; those who lost, took a more gloomy and de- spondent view. It must be so always ; for we repeat again, the Derbyis in reality nothing more than agreat National Sweepstakes, in which the drawers care only whether they draw blanks or prizes.