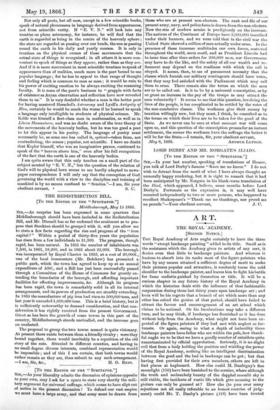 THE REDISTRIBUTION BILL [To THE EDITOR OF THE " SPECTATOR.1

Middlesborough, May 15 1866. SIR,—As surprise has been expressed in some quarters that Middlesborough should have been included in the Redistribution Bill, and Mr. Disraeli has so far endorsed the sentiment as to pro- pose that Stockton should be grouped with it, will you allow me to state a few facts regarding the rise and progress of the "iron capital?" Within a period of thirty-five years the population has risen from a few individuals to 31,300. The progress, though rapid, has been natural. In 1851 the number of inhabitants was 7,500, in 1861, 18,200, and in 1863 about 22,000. The borough was incorporated by Royal Charter in 1853, at a coat of 20,000/., one of the local ironmasters (Mr. Bolckow) has presented a public park, which the town has agreed to keep up at an annual expenditure of 5001., and a Bill has just been successfully passed through a Committee of the House of Commons for greatly ex- tending the boundaries of the borough, and affording important facilities for effecting improvements, &c. Although its progress has been rapid, the town is remarkably solid in all its internal arrangements, and its powers of production arc steadily extending. In 1860 the manufacture of pig iron had risen to 500,000 tons, and last year it exceeded 1,000,000 tons. This is a brief history, but it is sufficiently noteworthy to demand consideration, and that con- sideration it has rightly received from the present Government. Great as has been the growth of some towns in this part of the country, Middlesborough stands unrivalled, and the increase goes on unabated.

The proposal to group the two towns named is quite visionary. At present there exists between them a friendly rivalry ; were they bound together, there would inevitably be a repetition of the old story of the cats. Situated in different counties, and having in no small degree diverse interests, combined representation would be impossible ; and of this I am certain, that both towns would rather remain as they are, than submit to any such arrangement.