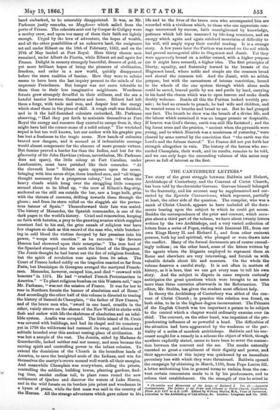 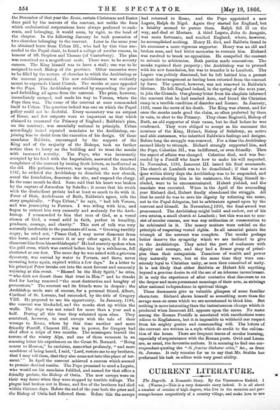 THE story of the great struggle between Baldwin and Hubert, Archbishops of Canterbury, and the Convent of Christ Church, has been told by the chronicler Gervase. Gervase himself belonged to the fraternity, and his account may be supplemented and cor- rected by the Epistolw Cantuarienses, which represent, partially at least, the other aide of the question. The compiler, who was a. monk of Christ Church, appears to have included all the docu- ments bearing upon the subject to which he could get access. Besides the correspondence of the prior and convent, which occu- pies about a third part of the volume, we have about twenty letters written by the two Archbishops, and a very varied collection of letters from a series of Popes, ending with Innocent Ill., from our own Kings Henry IL and Richard I., and from other emineat persons, both lay and spiritual, who plunged or were drawn into. the conflict. Many of the formal documents are of course exceed- ingly tedious ; on the other hand, some of the letters written by the agents whom the litigants employed to represent them at. Rome and elsewhere are very interesting, and furnish us with valuable details about life and manners. On the whole the volume deserves a careful study. It is not often in matters of history, as it is here, that we can get every man to tell his own story. And the subject in dispute in some respects curiously anticipates the great questions which were brought to an issue more than three centuries afterwards in the Reformation. The editor, Mr. Stubbs, has given the student most efficient help.

These documents give us valuable glimpses of some familiar characters. Richard shows himself as something more than the savage man-at-arms which we are accustomed to think him. But nothing is more interesting than the instantaneous change which is produced when Innocent LLL appears upon the scene. No name among the Roman Pontiffs is associated with recollections more odious to Englishmen, but it.is impossible to withhold our respect from his mighty genius and commanding will. The letters of the convent are written in a style which do credit to the cultiva- tion of the house. There are frequent traces of secular learning, especially of acquaintance with the Roman poets. Ovid and Lncan are, as usual, the favourite authors. It is amusing to find one cor- respondent quoting the "Si fracias illabatur orbis," &e., as from St. Jerome. It only remains for us to say that Mr. Stubbs has performed his task as editor with very great ability.